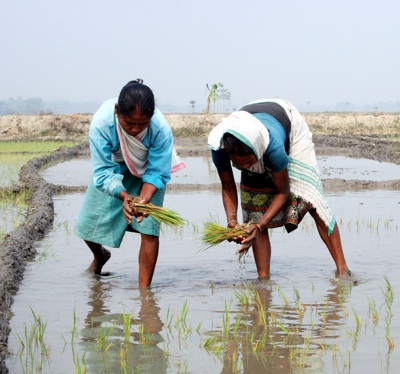 When we talk about the agrarian crisis in India and the quarter of a million farmers who have committed suicide since 1995, we tend to think about the men and the physical act of suicide–swallowing the very pesticides that landed them in debt after addressing final letters to village heads and prime ministers.

A staggering number of male farmers have taken their own lives in response to neoliberal reform policies that have left them dependent on expensive, genetically modified seeds, vulnerable on the global market and trapped in a cycle of debt. But news coverage of the “suicide epidemic” has largely failed to capture the acute ways in which women agricultural workers have also suffered in the crisis.

That could be because the experience of those women farmworkers in India, who take on the bulk of agricultural work and face systematic discrimination, is difficult to capture through traditional data collection. Women agricultural workers aren’t even counted as “farmers” by the Indian government, because they rarely hold title to the land on which they work. They are routinely denied access to credit and loans and rarely have access to government programs. The full scope of this injustice is unclear, say the authors of a new Center for Human Rights and Global Justice (CHRGJ) report [PDF], because government programs do not account for this discrimination.

Smita Narula, a co-author of the CHRGJ report, criticizes the Indian government for leaving women agricultural workers out of farmer suicide statistics. As Narula wrote to me in an e-mail message:

Women form the backbone of Indian agriculture. They comprise the majority of agricultural laborers, including those sowing seeds, transplanting crops and transporting crops from field to home. Failing to account for women farmer suicides not only significantly underestimates the scope of the problem–and limits the reach of proposed solutions–but also undermines women’s immense contribution to the nation’s agricultural sector.

Since the Indian government isn’t talking about women, media outlets have followed suit. Narula highlights P. Sainath, the rural affairs editor of The Hindu, as an example of one key individual who has brought the impact of the suicides on women to light, but says that Sainath’s coverage is not the norm.

The reporting on male suicides also fails to capture the “ripple effects.” As the CHRGJ authors write:

When husbands commit suicide, they not only leave their wives with their debt but also with the responsibility to marry off their daughters. As farmer-activist Sunanda Jayaram has noted, ‘There are debts hanging on [women’s] heads which they did not incur. There are daughters whose marriages are pending. The pressure is unending … surviving family members inherit the debt, children drop out of school to become farmhands and widows and unmarried daughters may themselves commit suicides in despair.’

Narula argues that comprehensive data and statistical information about the experience of women farmers will be necessary to ensure their human rights, and she says that there’s a strong case to be made for including women in farm statistics:

The human rights of farmers and families are deeply affected by this crisis and India has hard human rights obligations to respect, protect and fulfill these rights. This includes an obligation to ensure non-discrimination and substantive equality for women.