This past June, millions gathered in Sao Paulo, Brazil, to participate in the country’s annual Gay Pride Parade, the largest in the world. However, not all Brazilians were celebrating. Right-wing politician Carlos Apolinário condemned the parade and called for the creation of a Heterosexual Pride Day to counterbalance what he sees as the “excesses and privileges” enjoyed by the Brazilian gay community. But what would Heterosexual Pride Day entail? Here’s what we think it might look like in the U.S., announced by anchors from the Straight News Network (SNN).

Barbara la Birch: Hello everyone, and welcome to the SNN live coverage of the First Annual Heterosexual Pride Parade! I’m Barbara la Birch, looking out over the parade route with Kenneth Crawford, and we’re joined by Skip Sheppard who’s reporting from down on the parade route. We’ll be giving you a play-by-play of this non-gay day! How’re you doing, Ken?

BL: That’s the spirit, Kenneth! We hear from SNN viewers all the time that they feel the mainstream media has become almost hostile to them, which is no surprise with such a pervasive gay media bias. So we’re glad to be here covering this groundbreaking event!

KC: Yes, Barb, today’s parade is really a celebration of heterosexuality and God’s natural order. It’s not about taking a side, or anything.

BL: No, of course not! This is the Straight News Network, where we bring you the straight story–no spin, just the facts.

KC: Not everyone approves of the homosexual lifestyle choice, but it’s not about that. The organizers say it’s about reclaiming the concept of pride in being a straight American. It’s like the concept of “Black Power,” remember that? Nothing wrong with Black power or pride, but then shouldn’t white people be proud of “White Power?”

BL: (pause) … Well, um … Oh, Ken, I’m told that there’s a fabulous show in store for us thanks to parade sponsors, Focus on the Family and … oh look! I think the parade is starting!

KC: Is that Mr. and Miss Straight Pride kicking things off? Let’s go down to Skip and see if he can tell us; Skip, what do you see? 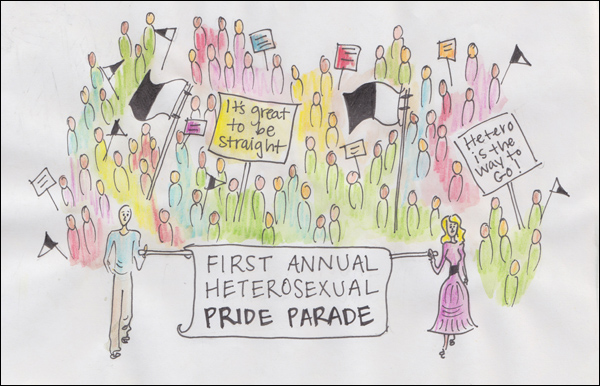 BL: Oh how WONDERFUL! Isn’t that great?! And right behind them is the first float. What’s happening here, Skip? It looks like a celebration! 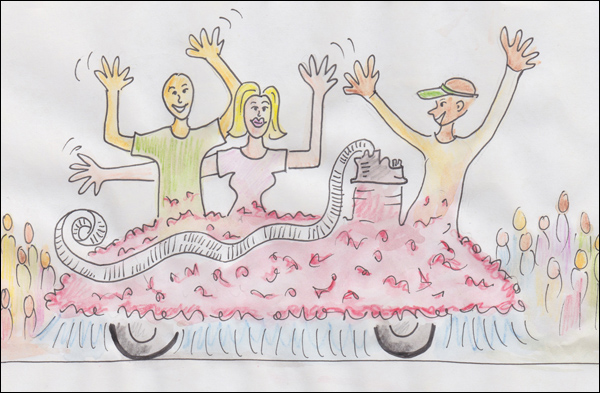 SS: Yes Barb, it is a celebration, and for good reason! This is the “Benefits of Matrimony” float, honoring the many benefits given exclusively to legally married straight couples in the U.S. It depicts a newly married couple with their accountant standing by to explain all the financial benefits they’ll now receive.

KC: Check out the craftsmanship on this float, Skip! Is there a motor inside that calculator spitting out all that tape?

SS: Yes there is, Ken, and it’s working overtime today! Did you know that there are roughly 1,138 benefits that only legally married couples receive?

KC: Wow! That must be a great source of pride for this couple. And what’s this next float?

SS: This is called “Public Display of Affection,” Kenneth. It pays tribute to God’s most beautiful gift of all: that of a man and a woman’s freedom to express their love any time, any place, using any body part, without the threat of harassment, violence or disrespect. 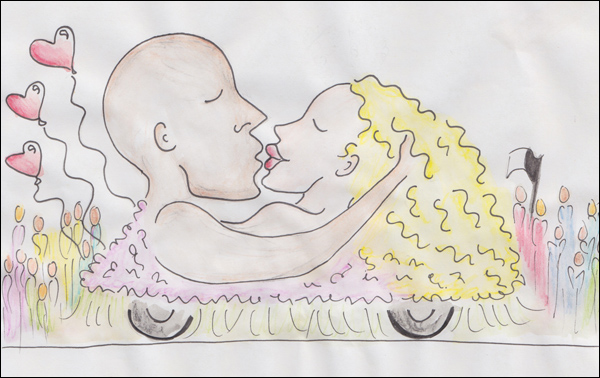 BL: Oh, isn’t that cute! You know Ken, the ability of a heterosexual couple to demonstrate such a publicly sanctioned, stigma-free confirmation of their relationship warms my heart.

KC: Mine too, Barb. It’s one of the things that makes America great and makes me proud. And who do we have coming up behind the lovebirds?

SS: These are the “Straights on Skates,” from the Pineville Church Men’s Club. You may have heard of Dykes on Bikes–well these gentlemen are cleverly pairing their inline-skating skills with their rugged masculinity to show off their heterosexual prowess. Look at them go! 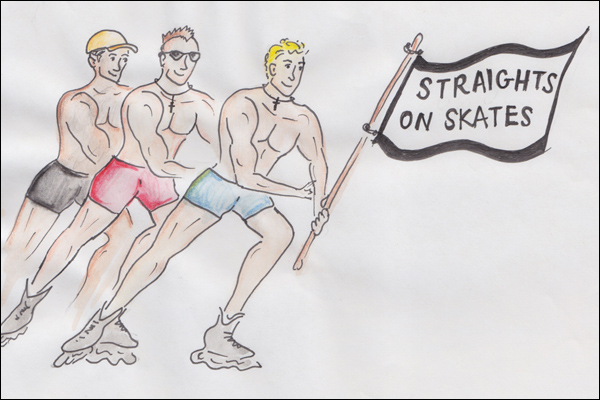 BL: And look at those beautiful, or I should I say handsome flags they’re waving!

KC: Handsome indeed, Barbie. I notice the flag is a striking pairing of black and white.

SS: Yes Ken, the colors–or, rather, lack of colors–were chosen by the parade committee to represent the unmistakable gender binary. According to the group’s chair, the stark contrast reminds us of God’s great, dichotomous creation, and his commandment that each of us strive to fulfill our distinct, pre-ordained roles.

BL: Wow Skip, the flags are simply stunning. And the hunks waving them aren’t half bad either–they sure look good gripping those flagpoles. Is that a celebrity rapper on the next float, Skip?

SS: Well, yes and no, Barb. I believe Lil Wayne was supposed to be on this next float, because he’s extremely outspoken about his strictly heterosexual encounters. He is a perfect example of a man who is straight and proud of it! But I’m told he was uncomfortable being on a float because it seemed a little gay. So I understand he and some other gentlemen decided to ride in a pickup truck. 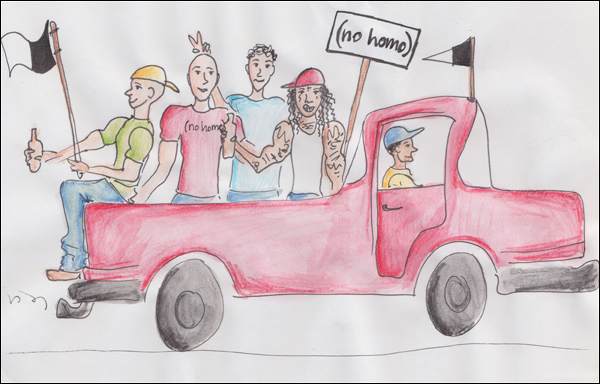 BL: Ooh, look at all those guys squeezed together on the bed of the truck!

BL: I know! And I have to admit, I’m feeling pretty proud of how attracted to them I am!

KC: That is definitely one of my favorites so far–it reminds me of my days as a young fraternity brother, doing dude stuff with the guys. College really was great, because back then folks weren’t persecuted for being straight. It was seen as something to be proud of! Do I see another float coming along? 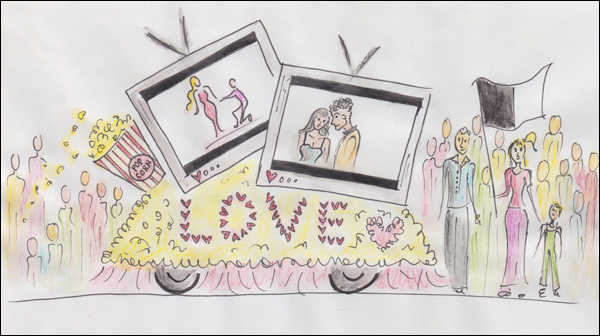 BL: Indeed, and it looks to be the “Romantic Comedy” float! I’ve gotta tell you Kenneth, this is my favorite so far. I spent many a sleepover as a girl watching these films–laughing, crying, eating popcorn and internalizing essentialist tropes. It’s like reliving the process of learning how to be a woman by finding true love with a perfect man!

KC: Well Barb, it’s not every day anymore that you see a man and a woman fall in love on the big screen; I think that’s part of the reason people are so excited about this parade. It’s really filling a void in our culture, wouldn’t you say?

BL: Yes, Ken. In fact, the parade organizers reminded me earlier that heterosexuals make up just 96.5 percent of the population. Honoring the special, endangered love between a man and a woman is really what today is all about, and not a moment too soon!