Gender and Race Determine the Worth of Your Degree - Ms. Magazine
Skip to content

Researchers at Georgetown University’s Center on Education and the Workforce have compiled a new report on how education affects people’s earnings, based on 2007-2009 American Community Survey data. Not surprisingly, higher education significantly increases lifetime earnings of U.S. workers: 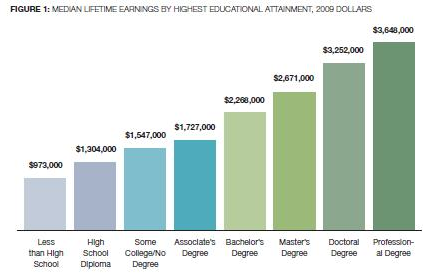 But education doesn’t pay off equally for all groups. Women make less at every level of education than men do; in fact, their median lifetime earnings are generally on par with men a couple of rungs down the educational ladder: 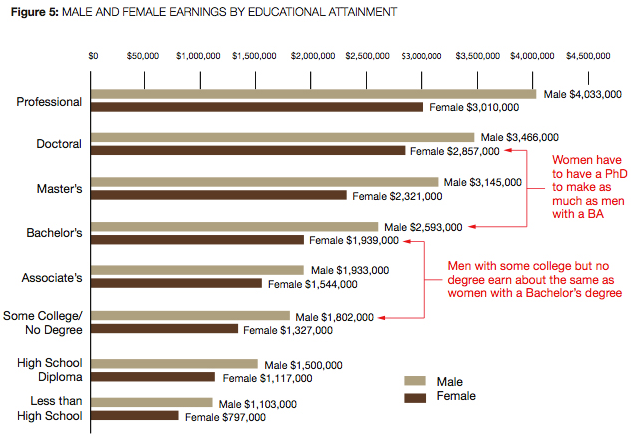 Ah, but, you might think, women are more likely to take time out of the workforce than men, so perhaps that accounts for the difference. But the gaps calculated here are only for full-time, year-round workers and do not include periods out of the workforce. This is the “best-case scenario” in terms of comparing earnings by gender, and yet women still make about 25 percent less than men with the same level of education. If workers taking time out of the workforce were factored in, the pay gap would be significantly larger. The far right column in this table shows how much less women make compared to men if each works the “typical” pattern for their educational level:

The benefits of education also vary by race and ethnicity, with non-Latino Whites generally making more at each educational level than all other groups, though Asian Americans outearn them at the highest levels: 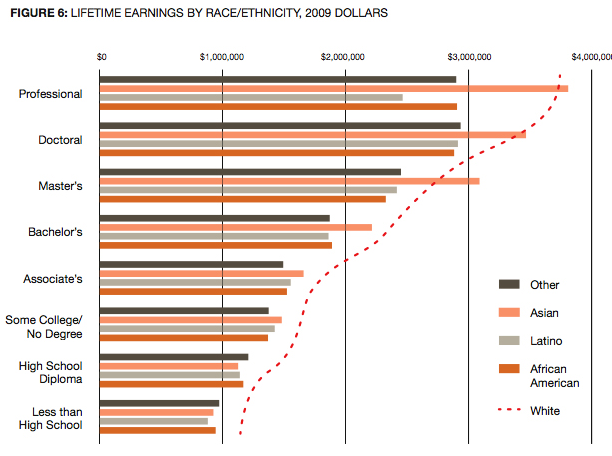 In this analysis by race, the authors don’t include a table showing the gap if workers who do not work full-time year-round throughout their careers are included. But they state that as with gender, the gap widens significantly, since non-Whites are more likely to experience periods without work.

So does education pay? Undoubtedly, for all groups. But due to factors such as occupational segregation (especially by gender) and discrimination in the workplace, the return on an educational investment is clearly a lot higher for some than others.

Reprinted with permission from Sociological Images.