A New "Fright Night": What a Difference a Female Screenwriter Makes - Ms. Magazine
Skip to content 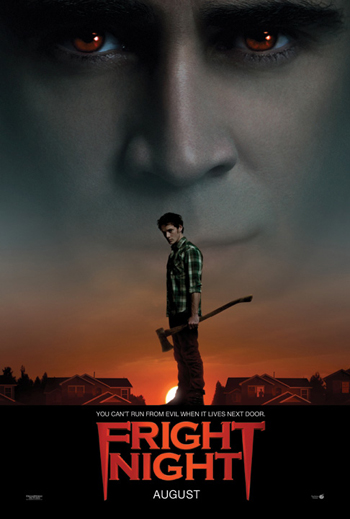 Debates about whether women’s writing was uniquely female or if there was a “feminine voice” permeated much femininist theorizing in the ’70s and ’80s. While I tend to be wary of claims about difference grounded in biological determinism, I do think that for many female writers their experiences as women, or as what Simone de Beauvoir famously called “the second sex,” often inform their writing. This is partially how I account for the remake of Fright Night being much better–and more feminist-friendly–than the original: The screenplay was written by a woman.

In her version of Fright Night, gone is the girlfriend-as-sweet-virgin and the overprotective-but-ineffectual mother. In their place, Imogen Poots is an independent, savvy Amy, and Toni Colette is the smart, successful single mom, Jane. When things turn violent after nice-looking neighbor Jerry (Colin Farrell) is found to be a vampire, Jane drives the get-away SUV, and then saves her son Charley (Anton Yelchin) by staking Jerry with one of her real estate signs. Later, Amy, no damsel in distress, fights alongside Charley against Jerry and the converted Ed (Christopher Minz-Plass).

In the 1985 film, Amy (Amanda Bearse) didn’t do any fighting–she only sweetly hung by Charley’s side–until she was turned vampire by Jerry and became the typically sexed-up evil female. Evil because she is sexual, as has been the case in vampire narratives since Carmilla and Dracula. Contrastingly, in the remake Amy has far more sexual agency–and is not demonized for it.

Further, the film offers an interesting take on masculinity, exploring the ways violent masculinity (as embodied by Jerry) intersects with sexism. Jerry claims women are “ripe” for picking, an attitude echoed by many other male characters, from the “cool kids” at school to magician/vampire hunter Peter Vincent (David Tennant). The script skewers this type of male–both literally, in Jerry’s demise, and figuratively through jokes regarding Vincent’s inability to sexually please his female lover.

Charley, the film’s hero, is held up as a model of good masculinity–not because he successfully kills Jerry so much as because he cares for his mom, loves his girlfriend and helps his neighbors. The film is framed around his “growing up,” something the outset of the film links to his abandoning his superhero playacting days and becoming “cool” so he can snag Amy as a girlfriend. But he is ultimately punished for this “tough guise,” realizing through his interactions with Jerry (the womanizing vampire) and Vincent (the womanizing fraud) that he does not want to be that kind of guy. To add a cherry on top of this already enjoyable meditation on masculinity, we learn that Amy likes him because he is not cool in the tough-guise way. This cinematic portrayal of a lead female refusing to be seduced by violence is all too rare; in fact, it’s usually just the opposite, with women being attracted to “bad macho.”

This is certainly true of Twilight, the modern juggernaut of vampire stories, which Noxon’s screenplay nods to when Amy reads Wuthering Heights (Bella Swan’s favorite book) and knowingly jokes about how “hot” that type of delayed gratification is. Here, Amy is framed as reading between the lines of romance narrative and understanding what it is about such stories that seduce readers. Likewise, she sees underneath Charley’s attempts to be cool, and loves him for not being the type of guy that sees women as “ripe for plucking.”

In the end, Jerry, who Melissa Lafsky aptly describes as “all id and ego: a walking erect cock” is brought down by Mr. Nice Guy. Destroying Jerry also saves the people he has turned, thus suggesting that not only do evil vampires need killing but so does evil masculinity–and that killing it would benefit all of us, not just the men under its thrall.

Promotional poster for the movie.