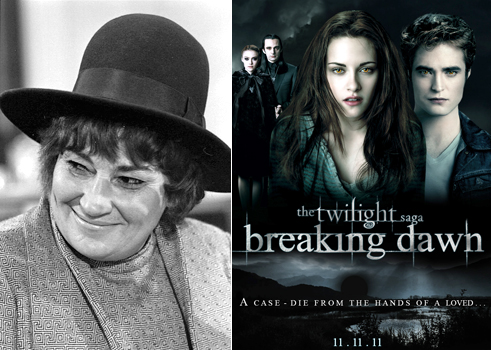 As today is the 40th anniversary of Women’s Equality Day, it’s an appropriate moment to consider the continuing inequalities women face. As a scholar of popular culture who tracks the way it grapples with changing conceptions of gender and sexuality, I am struck by the profound difference between Bella Abzug, staunch supporter of women’s rights, and today’s most popular Bella: Bella Swan.

The upcoming November release of Breaking Dawn: Part 1, the first half of the two-part film adaptation of the final book in Stephenie Meyer’s Twilight saga, will include the much anticipated wedding and honeymoon of Bella and vampire Edward Cullen.

Given previous reactions to leaked photos of the vampire-human honeymoon scenes, fans will likely clamor for these racy scenarios. Parents, depending on their views of appropriate sexuality and relationship ideals, will be variously delighted by the “happy ending” in marriage or dismayed by the film’s sexualized content. Traditional vampire aficionados will scoff at the idea that lead vampire Edward is able to impregnate a human–something that goes against typical vampire lore. But I, as a women’s studies professor, will be viewing the film with an eye to how it romanticizes sexual violence.

From where I sit, Twilight wrestles with gender norms, abstinence imperatives and that age-old message foisted upon females: True love conquers all. No Sookie Stackhouse or Buffy the Vampire Slayer, Bella is instead a rather weak damsel in distress, traipsing after the two leading men–one a domineering vampire, the other a prone-to-violence werewolf.

The bruised body of post-coital Bella that will be seen in the opening sections of Breaking Dawn should concern anyone who cares about violence against women. But Bella’s battered body, like the bodies of so many women, will likely be largely forgotten in between frames. As such, the saga begs the question: “Is sexualized violence acceptable?” And why don’t images of battered women give us more pause, especially on a day like today?

Bella shares her first name with the initiator of today’s 40-year old holiday, Bella Abzug. But any similarity stops there. One Bella was famous for saying, “This woman’s place is in the House—the House of Representatives,” while the other promotes the idea that a woman’s place is in the domestic home (whether she is cooking for her father, in the first three books, or bedding her beloved vampire husband in the last). Sure, Meyer’s Bella gets a superpower at the end, but it is the power to cocoon others in a protective mind shield–a sort of virtual womb space. Yes, you got it: She is allowed the power to mother.

While the Twilight saga has other hints of female power–a Wall-Street savvy female vampire and a smattering of female vampire leaders–the overwhelming undercurrent of romance, sexual violence and female subordination (as well as the “happy” ending of Bella wed, bed and bruised) suggests the best path for  women is not the one to equality but to true love, a myth as enduring as vampires.

To be sure, the film is hardly the only one to render females as the second sex and depict violence sex as proof that true love is in the air. But given the rabid popularity of the saga, and the highly anticipated depiction of the sex scenes, we should take a human moment  and consider what the other Bella would make of Bella Swan’s treatment in the film. Is the type of equality we seek that in which we can choose to romanticize hot, abusive vampire sex?

I, for one, think we’d be better off wearing wild hats, as Abzug did, and insist as she did that women not be treated as second-class-citizens, in life or in film. From the onslaught against reproductive freedoms to the rape-blaming that frames women as at fault for the violence done to them, evidence that Women’s Equality Day is here in name only abounds, and not only in headlines, but also in representations of domestic violence in the pages of the rabidly popular Twilight saga and its film adaptations.

Though it’s been 91 years to the day since Congress ratified women’s right to vote, women’s place in the House of Representatives is still far from equal [PDF]. And, more pervasively, a woman’s body is still not her own.