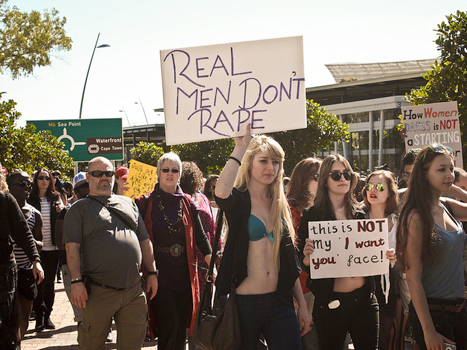 In 2008 hundreds of South African women donned their miniskirts and protested at the taxi rank where a young girl was brutally accosted by taxi drivers and hawkers for wearing a short denim skirt. The men who accosted her allegedly stuck their fingers into her vagina and called her a “slut.”

Women were outraged. The angry protestors wore mini skirts and T-shirts saying, “Pissed-Off Women.” They stormed the ranks and told the perpetrators in no uncertain terms to lay off women and girls who wore jeans and short skirts. Their message was clear: Don’t tell us what to wear and don’t think that our short skirts are an invitation either.

This past weekend about 2000 women and men gathered in Cape Town for South Africa’s first of a series of SlutWalk initiatives, which are also set to take place in Johannesburg and Durban in September. Everyone dressed up in clothing that would typically be considered  “slutty” and placards sporting messages such as Patriarchs se poes! (“Patriarchs’ pussy”) and Proud Slut abounded. The atmosphere was electric with ribaldry, revolution and a celebratory freedom of sexual expression most often linked to Gay Pride. What this tells us is that South African women from different social classes and cultures have collectively had enough of sexual assault, rape and the patriarchal controlling attitudes towards them. They have joined the global SlutWalk movement to add their voices to the powerful message that enough is enough.

The SlutWalk phenomenon began in Toronto this year after a policeman offered advice to students on how to avoid sexual assault in a crime safety forum at the Toronto University. His comment to them:

You know, I think we’re beating around the bush here. I’ve been told I’m not supposed to say this. However, women should avoid dressing like sluts in order not to be victimized.

The organizers of the first march in Toronto seized the word slut and reclaimed their right to wear what they want and express their sexuality freely. The message was loud and clear: “Don’t tell us what to wear. Tell men not to rape.” After the first SlutWalk in Toronto, it became a phenomenon that rapidly spread to London, Orlando, Mexico City, Melbourn and Delhi and more recently to Cape Town. Facebook also boasts close to 100 SlutWalk pages from countries around the world, including Helenski, Mumbai, Morocco and Singapore.

This SlutWalk phenomenon shows no signs of abating anytime soon. It is a movement that refuses to be shamed and the messages from every country are similar.

“This is what I was wearing when I got raped and I still did not ask for it,” states a purple placard carried by a voluptuous woman wearing a low cut black lace top and leggings.

“I was wearing jeans and a button-up collar shirt when I got raped, states another.

“I was 10 when my father raped me and he did not care what I was wearing” shouts another.

“I wear heels to be tall. Not raped!” says a placard carried by a short women in heels and tight mini skirt.

Whether the messages on these placards are raunchy, poignant, witty or angry, the memorandum is unambiguous. Women have had enough of being told that they are the ones to blame–of being taught to police themselves instead of men being taught not to rape–of being labeled sluts as if this label justifies their mistreatment. And uncannily it is this very label that fuels the movement. It seems that in the reclamation of the slut label, the word has been alchemically transformed into an elixir for change.

Few would have guessed that this little word contains so much power. It has been used against women for centuries–to denigrate working women, persecute women with libido and even burn women at the stake. It has been used to hyper-sexualize and objectify women and to turn women into repressed joyless vessels and sexual victims. It has been a tool of control utilized to maximum effect by misogynists, witch hunters, and rapists throughout the centuries.

But now that women have seized and reclaimed this four-letter word, it has proved its potency in a short space of time, catapulting the issue of sexual abuse and rape right into a global public arena with an effectiveness never witnessed before.

While there are some feminists who dismiss the use of a word that has such negative connotations, the SlutWalk has become a global phenomenon that has been endorsed by feminists such as Germaine Greer. Eve Ensler, famous for the Vagina Monologues, is quoted in numerous slogans carried by SlutWalkers.

Poet and feminist Alice Walker has also recently sanctioned it in an interview with Guernica Magazine. She succinctly encapsulates the essence of the movement in her interpretation of the use of the controversial word when she says:

I’ve always understood the word ‘slut’ to mean a woman who freely enjoys her own sexuality in any way she wants to; undisturbed by other people’s wishes for her behavior. Sexual desire originates in her and is directed by her. In that sense it is a word well worth retaining. As a poet, I find it has a rich, raunchy, elemental, down to earth sound, that connects us to something primal, moist, and free.

In my view the word slut is a signifier for the resurgence of the primal sexual nature of women that has been pushed underground and controlled by a misogynistic order for centuries. It seems to me that women are responding to a collective archetypal call to seize back the freedom to be themselves.

SlutWalk is a manifestation of our collective desire to no longer be obedient. It speaks of necessary subversiveness. It also tells men that their sexual abuses of women will no longer be tolerated. It unites women in a common sisterhood and it raises our voices in a collective feminine language such that we will no longer be spoken for.