The Battle's Not Over - Ms. Magazine
Skip to content 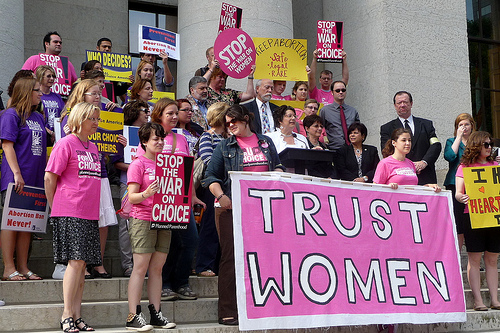 Recent headlines have touted legal victories for feminists in the state-level war on reproductive rights. “Courts Put the Brakes on Agenda of G.O.P.,” announced the New York Times on Monday. “Judge Blocks Texas Forced Sonogram Bill,” enthused Feminists for Choice. But the sober reality is that courts have only partially struck down anti-choice laws, which means women’s reproductive rights are still being sliced away.

It’s true that on August 30, Texas courts struck down parts of a controversial anti-abortion law mandating sonograms for women seeking abortions. Doctors will not be required to show sonogram images, describe them or to play the sound of the fetal heart beat if the woman does not want them to. Nor will women who wish to avoid seeing the sonogram be made to sign a statement saying they are pregnant because of sexual assault or incest.

Similarly, on September 2, the U.S. Circuit Court of Appeals struck down parts of an anti-choice bill in South Dakota. Doctors will not have to tell women that having an abortion puts them at increased risk of suicide. The court ruled that this would have violated doctors’ first amendment rights by requiring them to make “untruthful and misleading” statements.

These are indeed victories. But unfortunately, they are incomplete. Doctors in South Dakota are still required to tell women that they have “an existing relationship with that unborn human being and that the relationship enjoys protection under the United States Constitution and under the laws of South Dakota” and that they are about to “terminate the life of a whole, separate, unique, living human being.” If you think that could violate Roe v. Wade by making it sound like fetuses are people, well, so did a lower court, but to the glee of anti-abortion groups, the appeals court disagreed.

In Texas, the Center for Reproductive Rights, which brought the suit, did not challenge the part of the law requiring that women seeking an abortion must have an ultrasound (because the Center’s client clinics were already performing these). So women in the state will still be required to have a medically unnecessary test and then wait 24 hours for the results in order to have an abortion. According to the Center, women used to be able to get the necessary information to begin their waiting period over the phone, but the new law requires that they go to a clinic and receive it in person, necessitating two visits.

Supporters of such laws might be surprised to hear that abortion providers already have established, taught and practiced medical standards to ensure that women have all relevant medical information and are not being coerced into having an abortion. The chapter on “Informed Consent, Patient Education and Counseling” in the leading textbook on abortion care in the United States, Management of unintended and abnormal pregnancy, clearly states:

Informed consent is a legal and ethical obligation. … Informed consent includes informing the patient about her medical condition, available treatment options, and the benefits and risks of these alternatives.

The woman should initially be questioned alone about her decision and afforded an opportunity to disclose coercion. If a patient expresses doubts or misgivings, her options and feelings warrant more extensive exploration.

The law’s supporters also might be surprised to learn that women are actually capable of making decisions on their own, without a doctor guilt-tripping them one way or the other. In fact, the Center for Reproductive Rights Texas suit argued that the law “discriminates against women by subjecting them to paternalistic ‘protections’ not imposed on men.”

As U.S. District Judge Sam Sparks put it in his ruling on the Texas case,

It is ironic that many of the same people who zealously defend the state’s righteous duty to become intimately involved in a woman’s decision to get an abortion are also positively scandalized at the government’s gross overreaching in the area of health care.