Where Were the Chicana Feminists? Right Here - Ms. Magazine
Skip to content 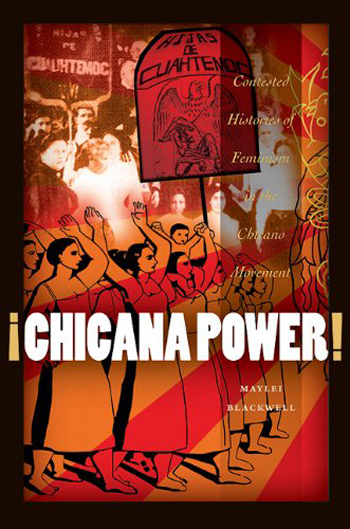 In my Chicana Feminist Theory classes, there’s one text I never fail to teach: Alma Garcia’s 1997 Chicana Feminist Thought: The Basic Historical Writings, a collection of newspaper articles, broadsides and essays by Chicana women activists of the 1960s and ’70s. Students identify with the sense of political urgency in these writings. Chicanas were struggling for traction within two movements of the epoch: the mainstream feminist movement and the parallel Chicano movement.

The writings hint that their authors understand their race, gender and sexual identities as both the basis of gross exclusion and as points of strength. I had always yearned to know more: Who were these women as people? What were their personal struggles beyond these militant writings?

Finally, someone has provided an analytical companion to Garcia’s Chicana Feminist Thought: an oral history that answers my questions and many more. Maylei Blackwell’s ¡Chicana Power! Contested Histories of Feminism injects women into the history of the ’60s and ’70s Chicano movement, upending the usual tale of a heterosexist, masculinist social movement for the liberation of brown men. Instead, Blackwell makes a compelling case that there would have been no Chicano movement without the tremendous contributions of Chicana feminists.

This work is the fruit of a 12-plus-year oral history project that Blackwell describes as “retrofitted memory”: a “form of countermemory that uses fragments of older histories … in order to create space for women in historical traditions that erase them.” With this notion of the retrofit–like the earthquake-proofing of a rickety building–Blackwell fills historical gaps by restoring unfamiliar names of activists such as Ana NietoGomez, Leticia Hernández, Sylvia Castilo, Elma Barrera, Yolanda Birdwell, Gloria Guardiolo, Elizabeth Mártinez and Corrine Sánchez and organizations such as the Hijas de Cuauhtémoc to their rightful place in history.

Take NietoGomez, a former Mecha (Movimiento Estudantil Chicano) president and peer counselor at Cal State Long Beach in the late 1960s. She was one of the women who most antagonized her Chicano peers by taking a leadership role and then advocating for women’s rights in the movement. For NietoGomez, Chicana women’s rights were not just about the end of sexism within the movement and larger society, but also about sexual freedom and reproductive rights. As a counselor, NietoGomez saw firsthand the trauma of Chicana students who lacked a social movement or any of kind of support system to help them navigate numerous obstacles. Simply staying in college once they got there was a struggle because many had to support their families, they typically lacked access to safe abortions and birth control and, as part of the first major wave of Mexican Americans in college, they all too often experienced racism in the classroom.

In addition to filling the gaps in Chicano movement history, the book also takes on the important work of shoring up feminist histories. Blackwell looks at the ways in which the larger narrative history of “the” feminist movement often ignores work by early women-of-color feminists. She argues that these political subjects with multiple identities (Chicana, queer, female, etc.) are not often registered in feminist histories that address only a single form of oppression, such as that of “radical,” “liberal” or “socialist” feminism. Placing Chicana feminists in a broader history of Third World feminist struggles, Blackwell links their work with that of women in WARN of the American Indian Movement and the Combahee River Collective. By doing so, Blackwell suggests that Chicana feminism has the potential to be a feminism for everyone, should we choose to claim it.