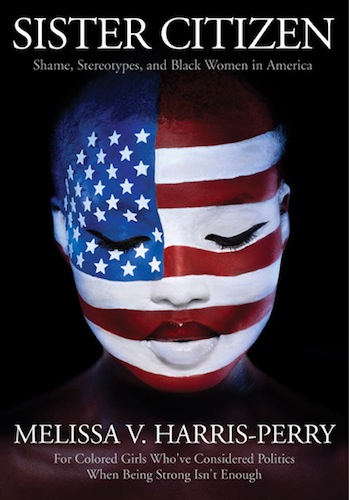 At a time when far too much of the public discourse about black women is either dooming us to eternal spinsterhood or “proving” our unattractiveness through racist pseudoscience, Melissa Harris-Perry’s Sister Citizen: Shame, Stereotypes, and Black Women in America insists that black women’s feelings and experiences not only matter but also are “inherently political.” Harris-Perry brings together literary and media analysis, qualitative data and political science to examine black women’s coping strategies and emotional responses to stereotypes. Those distorted images make America a “crooked room” where sisters find it difficult to stand as valued citizens. According to Harris-Perry, black women’s responses to pervasive social misrecognition range from shame to displays of superhuman strength. Both effects tend to leave black women unhappy and personally unfulfilled.

Harris-Perry’s book begins in an unusual place for a political scientist: with a work of literature. The hurricane scene from Zora Neale Hurston’s Their Eyes Were Watching God launches a discussion of hurricane Katrina, a real-time disaster in which black women were the main characters. By paralleling these two apocalyptic events, Harris-Perry puts forth her argument that “black women’s experiences act as a democratic litmus test for the nation.” As black women often shoulder the intersecting burdens of race, gender and class disparities, we may well be the ideal subjects to gauge how well America upholds the rights of its citizens.

Recognition is integral to citizenship, Harris-Perry maintains. Yet, black women’s images are often refracted through cultural lenses that have been distorted by insidious stereotypes or what Patricia Hill-Collins terms “controlling images.” By now, the specter of “Mammy,” “Jezebel,” and angry, smack-talking “Sapphire” are familiar to those of us who study the history and culture of black women. However, the broad readership that Harris-Perry has drawn as a columnist for The Nation (and a guest host on MSNBC) will benefit from her explanation of these repeating tropes. Moreover, she details the material consequences of misrecognition, including policy and employment decisions. For black women, constant misrecognition is sometimes directed inward, leading to feelings of shame.

While queer theorists have explored and at times embraced the politics of shame, there is still a dearth of analysis of racial shame. Harris-Perry steps into that gap by theorizing how individual misrecognition contributes to personal feelings of shame, while political misrecognition incites collective racial shame. She thus validates the emotional vulnerability of black women, and her chapter on “Strength” reveals black women’s attempts to cope with negative feelings. She writes:

African American women hold up the strong black woman as a shield against the shame-inducing negative stereotypes of the crooked room. To protect against always being seen as inferior, they declare themselves uniquely capable, but this strength is a shield full of holes; it sets up new possibilities for being misrecognized.

While strength and self-reliance are laudable traits, the expectation that black women can endure the many challenges that befall us doesn’t allow for expressions of human frailty. Even when black women rely on spiritual sources of support, such as the church, they often end up putting the needs of others above their own, taking up the mantle of suffering as a show of spiritual strength.

It makes sense that a study of contemporary black women’s political lives would consider the first black First Lady. Harris-Perry shows how Michelle Obama negotiates the “crooked room” that all black women occupy–except under the national gaze. Rather than romanticize her or posit her as a example of the “progress” black women have made in the public’s perception, Harris-Perry deftly reminds us of Shirley Sherrod’s public humiliation at the hands of the conservative media, the NAACP and the White House. In other words, Harris-Perry cautions us not to fall prey to exceptionalism. While marked changes have occurred in the ways that the nation perceives black women, our collective struggles for recognition continue.