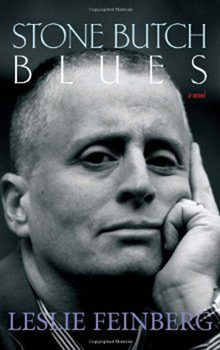 In honor of Queer History Month, Ms. Bloggers will be giving shout-outs to some of their queer heroes of the present and past.

Leslie Feinberg has been fighting the fight (or more accurately, fights) for more years than I’ve been on this earth.  In that regard, ze is my elder. I use this as a term of reverence for someone whose work has changed my life. And that’s exactly what Feinberg is—a teacher and a life changer. Other words to describe ze are activist, coalition builder, writer, transgender warrior and social justice leader. In case this is your introduction to Leslie Feinberg, here is some background to orient you:

Feinberg is the author of several books including Stone Butch Blues (1993), Transgender Warriors: Making History from Joan of Arc to Dennis Rodman (1997), Trans Liberation: Beyond Pink or Blue (1999) and Drag King Dreams (2006). Feinberg’s novels take readers on an emotional journey through the ever-changing lives of characters I dare you not to love. Always at the frontier of transgender politics, hir non-fiction books reveal the complexities of gender in a way that everyone can grasp.

As for Feinberg’s identity, ze lays it out in a 2006 interview:

I am a socialist activist and have been a trade unionist for my entire working life. I am currently a member of the National Writer’s Union local of the United Auto Workers. I was one of the founding members of the Lesbian and Gay Labor Network in New York City, and put a great deal of energy into the boycott of Coors Beer–an attempt to stop its most blatant anti-union, homophobic, right-wing activities and funding. … The working class has become more Third World, more female, gayer, younger. That shifts the potential for leadership to a more oppressed strata. The rumblings from below in the workforce are seen by some of the more progressive developments at the top leadership of the trade unions here.

But what you really need to know is that Feinberg embodies solidarity. Yes, hir words move me to tears each and every time I read them. But hir actions move me to be a better activist. Feinberg is a fierce ally in the purest, highest sense of the word. When I saw hir speak in 2007, ze said “Whenever people are fighting against a common enemy, that’s our struggle.” And then ze schooled us on the immense history of coalition building between anti-racist, anti-sexist, anti-homophobic, anti-imperialist movements. This message, made even more profound by the knowledge that Feinberg lives what ze speaks, has never left me.

What Feinberg taught me was that you don’t just talk about unity, you show-up. You self-educate. When you stumble (and you invariably will; movement politics are tricky), you learn from your mistakes. And you never ask for quid pro quo when you’re fighting injustice.

Leslie Feinberg is a living legend who has transformed the lives of many and, I’m sure, catapulted more than a few from their comfy reading chairs to the streets. This is but a tidbit of the contributions Feinberg has made. For those of you familiar with hir work, I encourage you to leave favorite quotes, lessons, memories, etc. in the comments section.  Let’s take this opportunity of queer history month to honor one who laid down many paths, and then shown us how to walk them.

Kyla Bender-Baird is the Research and Programs Manager for the National Council for Research on Women, where she acts as the in-house researcher, manages social media outreach, is the managing editor of the Council’s blog, and assists in the development and implementation of programming. Kyla holds an M.S. in Women’s Studies from Towson University and a B.A. in Sociology from Principia College. Her forthcoming book, Transgender Employment Experiences: Gendered Perceptions and the Law (SUNY Press), examines the holes in policy protections and their impact on the workplace experiences of self-identified transgender people. You can read her work in the second edition of Getting Bi (Bisexual Resource Center), Privilege and Prejudice: Twenty Years with the Invisible Knapsack (Cambridge Scholars Publishing), and Curve Magazine. Originally from Oregon, Kyla has been a proud resident of Brooklyn, NY for three years.