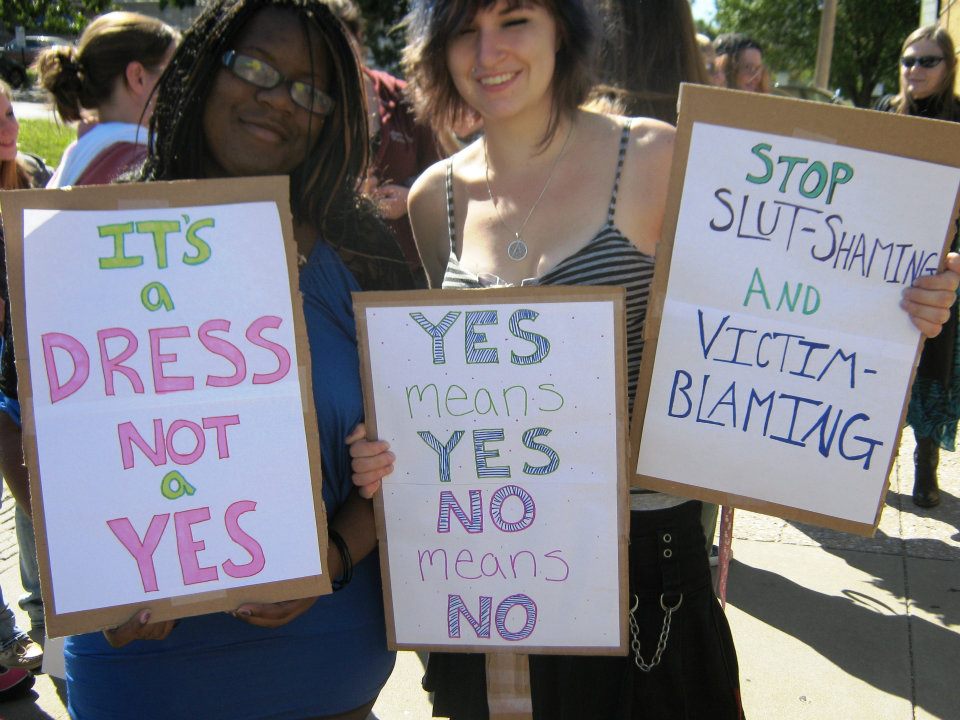 This past Saturday, while thousands of SlutWalkers took to the streets of New York, I attended my local SlutWalk, 840 miles away in Carbondale, Ill. I went to the anti-rape march not only because I am as a survivor of gender violence, a feminist and an anti-gender violence activist, but also because I was curious about what I would encounter and whether I would feel, as many other Black feminists have, a strong sense of alienation. I arrived with my partner and our puppy, Huxtable, in tow—for support and, if I am honest with myself, an acceptable out (“So sorry, Huxtable is too young to handle the crowd”). That I felt the need for an out tells me something about my preconceived boundaries around what feminism can look like. Even more telling were the nervous questions tapdancing on my mind: How might the SlutWalk be reproducing oppression in this very moment? What does my “Dr. Griffin” presence signify to the walkers and passersby who recognize me? Goodness me, why does it have to be called a SlutWalk?

With a reminder to myself to keep an open Black feminist mind, I began to pay better attention to what was happening around me. People cruised by on wheelchairs, bikes and skates. One woman, with her SlutWalk wristband on the same wrist as her hospital band, made the journey on crutches. What I saw was a beautifully diverse representation of what feminism can look like. That diversity taught me something about the significance of the SlutWalk.

Looking around at the 400 or so in attendance, I was reminded of the strength of dominant discourse to determine what arbitrary symbols signify “sluttiness.” Among those who chose to dress to fiercely resist such stereotypes, there was a cascade of short skirts, lace tights, knee high black boots and the color red. The signs on display also bespoke defiance: the most memorable read “My Dress is not a Yes”, “I borrowed this outfit from your MOM. Do you still want to rape me?” and, taped on the side of a baby girl’s stroller, “I Deserve to Grow Up in a World without Rape”. The sign that best captured my own sentiments was the sassy yet simple “Fuck Rape” in sparkly blue glitter. The many bodies and voices refusing to be disciplined into demure silence taught me something about the significance of the SlutWalk.

Taking in the crowd on a deeper feminist level with every step I took, I also realized that many women–and men–were unafraid to bare cellulite, stretch marks and tummy fat, all of which are typically outlawed by dominant size and beauty ideals. Baring the parts of themselves most vulnerable to cruel public commentary, they sauntered and strutted with a tangible sense of body confidence that I have never allowed my own body to know. I watched in admiration. Their courage to defy social norms on the very streets they travel daily taught me something about the significance of the SlutWalk.

As I walked, my nerves and suspicion eased. I found myself thinking a powerful thought: THIS is what feminism can look like. To argue otherwise, I realized, is an attempt to foreclose what feminism can be. To do so undermines not only the shift from feminism to feminisms, but also our feminist commitments to self-definition, empowerment and agency. We must ask ourselves, Who am I to determine how someone else should embody a feminist stance of resistance?

To be clear, I do not believe that the word “slut” can be positively redeemed or reclaimed. Like the word “nigger,” it is often the last one heard by those who pay the price of oppression with their lives. Such dehumanizing words serve to justify violence in the eyes of those who inflict it. I wish that SlutWalkers—myself now included—would pause to outwardly acknowledge the harsh reality of what such hateful words have been used to do.

I also know that the word “slut” has done things to my brown female body that racial privilege prevents White women from ever fully understanding. To purposefully put the word “slut”  back into everyday discourse, available for those fighting against our liberation to hurl at little girls or grown women on a whim, I feel is quite dangerous, particularly for women of color. My caution is motivated by the belief that we cannot control the use or meaning of a word once it moves beyond our lips, nor can we fully sever it from its history of degradation. I wish that SlutWalkers—myself now included—would pause to consider the risk of normalizing a word that has been used to maim, rape and murder.

Despite these feelings, my momentary resting point is that these concerns should not detract from the collective resistance that SlutWalks have birthed. Rather, such concerns should pull us into conversation about the complexity of resistance at the intersections of identities and the significance of building alliances. Even if my feminism looks different than yours, can we be unexpected friends, comrades and allies? SlutWalks seem to offer a loud “yes,” and if people such as myself, with a gaze tempered by suspicion or even outright disgust, choose to attend, listen and learn, we might be moved by the magical synergy of SlutWalks. Then we can open the question of giving them another name.

I left the SlutWalk feeling quite differently than when I arrived. My skepticism about organizing around the word “slut” is now accompanied by hope and humility. I am hopeful that we as feminists can remain engaged with one another, even when we rightly and righteously disagree. I am humbled by the reality that our local SlutWalk had a larger attendance than any of the Take Back the Night marches that I have been to or spoken at in the last 10 years.

Furthermore, there were more Black women at this anti-gender violence march than I have seen at any previous event in our small town. This reality, represented in sheer numbers, serves as a warning and a reminder for me to embrace how feminism can manifest differently than what I had ever imagined. Having wondered and walked, I find myself wishing that more would attend a local SlutWalk–if not to walk, then at least to witness what feminist activism can look like. Take the chance, you might be challenged and inspired. I was—which to me signals that feminisms and feminists are doing something right.

Rachel Alicia Griffin is an assistant professor in the Department of Speech Communication at Southern Illinois University - Carbondale. As a critical intercultural communication scholar, her research interests and publications span critical race theory, Black feminist thought, popular culture, gender violence, and pedagogy. She is also a frequent guest on college campuses and at conferences to present workshops and deliver keynotes that speak to how power, privilege, and intersectionality impact the ability to engage across identity differences. Most recently, she presented " Black Women and Gender Violence in For Colored Girls" on her campus; spoke at Georgetown University, Virginia Tech University, and Northwestern University; and published "The Disgrace of Commodification and Shameful Convenience: A Critical Race Critique of the NBA" in The Journal of Black Studies.