And the Nobel Goes To ... Women's Rights - Ms. Magazine
Skip to content 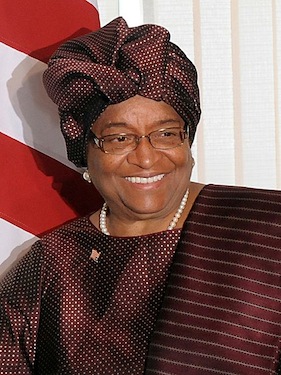 When it comes to honoring women, the Nobel Peace Prize committee has some catching up to do. Since 1901 when the first Peace Prize was given, only 12 of the 121 awardees have been female. But today, the female-to-male percentage rose from just over 9 percent to a nice round 12 percent, as three women–all activists for women’s rights–were named to share the 2011 honor.

Two of the women, Ellen Johnson Sirleaf and Leymah Gbowee, are from Liberia; the third, Tawakkul Karman, is from Yemen–the first Arab woman to win the prize.

According to the citation from the committee, the three women were named,

for their non-violent struggle for the safety of women and for women’s rights to full participation in peace-building work. We cannot achieve democracy and lasting peace in the world unless women obtain the same opportunities as men to influence developments at all levels of society.

Karman is a journalist and head of the human rights group Women Journalists Without Chains. She has been working to oust Yemen’s president Ali Abdullah Saleh since 2006, and her arrest this past January 23 sparked widespread protests that were part of the Arab Spring. She has variously been called “Iron Woman, “The Mother of Revolution” and “The Spirit of the Yemeni Revolution.” While advocating for human rights, freedom of expression and the empowerment of Yemeni youth, she also promotes a strong role for women in her country. As she said about the Yemen protests,

If you go to the protests now, you will see something you never saw before: hundreds of women. They shout and sing, they even sleep there in tents. This is not just a political revolution, it’s a social revolution.

Sirleaf, the president of Liberia since 2006, is the first and only elected female head of state in Africa (she is currently up for reelection). She had her work cut out for her after the brutal, allegedly criminal, dictatorial reign of Charles Taylor. The Nobel committee recognized her for contributions to “securing peace in Liberia, to promoting economic and social development, and to strengthening the position of women.” She has also been much praised for her activism in the fight to end gender-based violence against women.

Gbowee, who is featured in the film Pray the Devil Back to Hell, which will air on PBS October 18, has been a leader in the Liberian peace movement, bravely confronting Charles Taylor and his minions. Read our Ms. Blog interview with Gbowee to learn more about her and the film.

For the Nobel committee, the naming of Peace Prize winners isn’t just a recognition of past work, but shows a hopefulness for future movements toward peace. As the citation also reads about the three most recent winners,

It is the Norwegian Nobel Committee’s hope that the prize to Ellen Johnson Sirleaf, Leymah Gbowee and Tawakkul Karman will help to bring an end to the suppression of women that still occurs in many countries, and to realise the great potential for democracy and peace that women can represent.