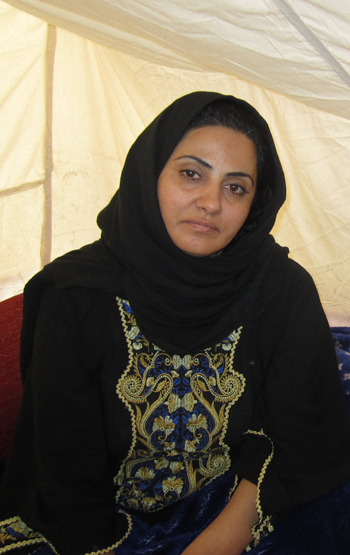 The 12-day hunger strike of Afghan parliament member Simin Barakzai ended yesterday when Afghan police reportedly dismantled her encampment outside the presidential building in Kabul. Barakzai began a fast-to-the-death to protest her unseating from the Afghan parliament.

claimed police, disguised as doctors, dismantled their tents, handcuffed and beat them, and took them to a local police station where they were held overnight and released this morning.

Baraksai was taken to Daud Khan Hospital; her current condition has not yet been reported.

On Wednesday, several people, including another Afghan MP, had joined Barakzai in her tent, and women’s rights activists organized a march to offer her support. Nilofar Ibrahimi, the MP who has taken up Barakzai’s cause, announced that

I want to show the people and the world that Simin’s move is not for power or position. It’s rather for restoration of justice. If it was for power, I would not have joined her.

On the fourth day of her strike, Barakzai issued this plea:

This disturbing video purports to show Barakzai being forcibly removed from her encampment and placed in a van, and then the large force of Afghan police dismantling the site of her hunger strike:

You can still show support for Barakzai and help her demand justice: Please sign this Change.org petition, or contact the U.S. Embassy in Afghanistan.

Photo of Simin Barakzai after four days of fasting, by Zareen Taj