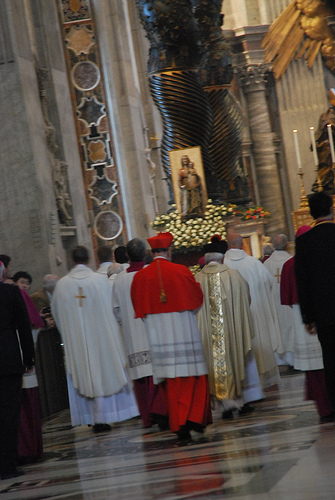 Father Roy Bourgeois, a beloved Catholic priest who has supported women’s ordination, was briefly detained in Rome yesterday after he and about a dozen women marched on the Vatican. The marchers held a banner reading “Ordain Catholic Women” and chanted: “What do we want? Women priests! When do we want them? Now.” Bourgeois and two others–Miriam Duignan of womenpriests.org and Erin Hanna, executive director of the Women’s Ordination Conference–were taken into a police car when they resisted taking down their banners (because they didn’t have a protest permit).

Father Bourgeois was excommunicated by the Vatican in 2008 over the women’s ordination issue and still faces dismissal from the priesthood by his order, the Maryknoll. But the longtime social justice activist refuses to let the matter of women priests drop, and he was in Rome with the Women’s Ordination Conference to present a petition in support of their ordination to the Vatican, signed by about 15,000. Said Bourgeois,

I have come to Rome with a basic question for our church leaders at the Vatican,” Bourgeois said. “How can we, as men, say that our call from God is authentic, but God’s call of women is not?

Those in favor of ordaining women insist that women at an earlier time were priests, and that banning them is purely sexist. But women’s ordination is so anathema to the current Vatican hierarchy that last year it was put on par with abusing a child. Since the Catholic Church seems quite reluctant to punish pedophilic priests, however, it begs the question as to why someone like Bourgeois is so penalized.

Photo of priests at St. Peter’s Basilica in the Vatican by Flickr user Trishhhh under license from Creative Commons 2.0