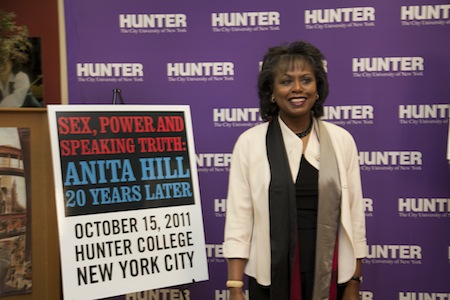 Almost everyone has an Anita Hill story. Some of us remember exactly where we were when that theater of sex, race and gender called a “hearing” was broadcast in primetime. Others recall water-cooler and sidewalk conversations and debates about guilt and innocence, about sexual harassment as a “white lady’s problem,” about the effect of the hearings on the black community. For a number of women, Anita Hill’s testimony resonated with our own experiences–inappropriate comments and sexual innuendo, gropes in elevators and sidelong glances across conference tables, often coming from men in positions to undermine our economic livelihood. Hill’s testimony freed us from our silence.

If you weren’t around then, Anita Hill was called to testify in 1991 in front of the Senate Judiciary Committee about her allegations of sexual harassment by Supreme Court nominee Clarence Thomas. The nationally televised hearings became a media spectacle of sexual and racial shaming. At the same time, those spectacular scenes brought workplace sexual harassment into the homes and imaginations of Americans in an unprecedented way. Twenty years later, the hearings are still engraved in our public memory, and several thousand women and men packed a Hunter College auditorium last week to hear Hill once again bear witness. The conference sought to understand the meaning of what happened in 1991, to determine what (if anything) we have learned since then and to work toward a future free of sexual violence.

Cultural memory is political work. And it is a kind of work that is most often done by women. Paula Gunn Allen’s statement about the work of memory in indigenous culture, a statement that Gloria Steinem referenced when she took the stage, speaks to the historical significance of unpacking the meaning of the Hill-Thomas hearings in our contemporary moment:

The root of oppression is the loss of memory.

Yale Law professor Judith Resnick, paraphrasing Toni Morrison, told the audience that, “Focus must be on the history ignored, played down, or unknown.” Other speakers, including Lani Guinier, Charles Ogletree, Kimberlé Crenshaw (who was part of Hill’s legal team in 1991), Emily May, Ai-jen Poo, Jamia Wilson, Melissa Harris-Perry and Catherine MacKinnon, echoed this sentiment.

Throughout the conference, activists and scholars “extended one another’s memory,” as Steinem put it. Speakers foregrounded the pivotal roles black women played in the movement to end sexual harassment. Crenshaw said it was the “erasure of black women’s political agency across time” that led to the bifurcation of black women’s involvement in antiracist activism and their mobilization against sexual harassment. Crenshaw credited works like Danielle L. McGuire’s The Dark End of the Street with extending our memory of the civil rights movement by reminding us that Rosa Parks’s “first act of courage was not sitting on that bus” but rather “refusing to accept the likely acquittal of a gang of white men who raped a black woman with impunity.”

The extension of memory also enabled panelists to connect Hill’s act of speaking out to contemporary struggles that immigrant women and domestic workers have with workplace harassment and other forms of sexual violence. Ai-jen Poo of the National Domestic Workers Alliance revealed that the two-and-a-half million women who are domestic workers are excluded from most labor protections, including sexual harassment in the workplace. New York State is an exception because domestic workers organized for six years to pass the Domestic Worker Bill of Rights that was signed into law last year.

Further, the memory of Anita Hill’s testimony has inspired a new generation of feminists to speak out against sex discrimination. Jamia Wilson of Women’s Media Center remembered hearing about Anita Hill as a “tween.” The case helped her come to the realization that, “I am not Anita Hill, but I could be, and that scares the crap out of me.” Similarly Emily May, executor director of Hollaback!, drew inspiration from the workplace harassment movement to co-found what has become an international movement against street harassment. “What’s the difference between harassment that happens on the street and that happens in the workplace, other than the location?” May asked rhetorically.

Anita Hill’s entrance to the stage was met with a standing ovation. Her talkback with Columbia law professor Patricia J. Williams introduced the audience to a woman who is more than a symbol of a movement and icon of a moment. Hill told the audience that while her testimony of 20 years ago is still “very much a part of who [she] is,” she’s also a teacher and a writer. Her current book, Reimagining Equality: Stories of Gender, Race, and Finding Home, brings together family history and personal history, and uses the lenses of gender and race to connect issues of equality such as sexual harassment and the housing crisis. Hill said:

What I try to do in this book is give voice to the people who have not been heard from during this crisis. And that’s what I’ve been trying to do with the issue of sexual harassment for the past 20 years. To help people find their voices. To talk about the issues that keep them from living lives fully and as equals.

Making these connections between the housing crisis, sex discrimination and Occupy Wall Street helps us to “reimagine equality,” said Hill. “We must imagine for a new generation what equality’s going to be like.” She also suggested that, although we have made significant gains in challenging sexual harassment, “we also should imagine a workplace where it no longer exists.”

Our struggles for equality in the 21st century are shaped by courageous acts like Hill’s, and they encourage us to envision a better world for the next generation. She told the audience she could not be more proud of that.