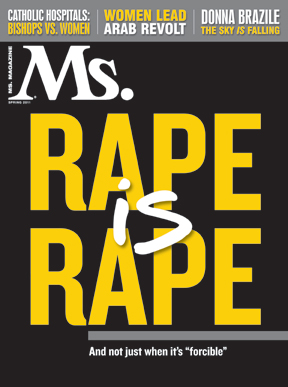 The “Rape is Rape” campaign, demanding that all rapes be counted in the FBI’s annual Uniform Crime Report (UCR), took a huge step forward yesterday at a crucial meeting of law enforcement officials.

The Uniform Crime Report Subcommittee of the FBI’s Criminal Justice Information Services (CJIS) voted unanimously to expand its definition of rape in the UCR. The vote came after many years of lobbying by groups such as the Women’s Law Project and the recent viral “Rape is Rape” campaign, started by the Feminist Majority Foundation and Ms. in partnership with Change.org–which resulted in nearly 140,000 emails to the FBI and the Department of Justice urging the change.

The new definition–of “rape,” no longer “forcible rape”–defines the crime as “penetration, no matter how slight, of the vagina or anus with any body part or object, or oral penetration by a sex organ of another person, without the consent of the victim.” The FBI would maintain data on “forcible rape” only for research and comparison.

“The new definition would be a major change to the FBI’s UCR Report and a major victory for advocates,” said Kim Gandy, General Counsel of the FMF.

Eleanor Smeal, President of the FMF, stated, “This will ensure the crime of rape is measured in a way that it includes all rape, and it essentially becomes a crime to which more resources are allocated. It’s intolerable the amount of violence against women, and we feel this will have a significant impact.”

The new definition will now go to the International Association of Chiefs of Police and working groups for feedback before a final recommendation is presented to the CJIS Advisory Policy Board (APB) in December. Finally the APB’s recommendation will go to FBI Director Robert Mueller for final approval. Fortunately, he’s already received nearly 140,000 emails asking him to update the definition, so he should be very familiar with the issue when the APB makes its recommendation.

Thanks to all who participated in this campaign; your efforts truly made an impact. But it’s not over yet. We need to maintain pressure on law enforcement officials to make sure this change is officially adopted and put into practice by the FBI. To that end, please add your signature now if you haven’t already, and share this with your networks urging them to do the same. Together we can help make sure that all rapes will be counted.