Our Bodies, Ourselves Is 40 and Fabulous - Ms. Magazine
Skip to content 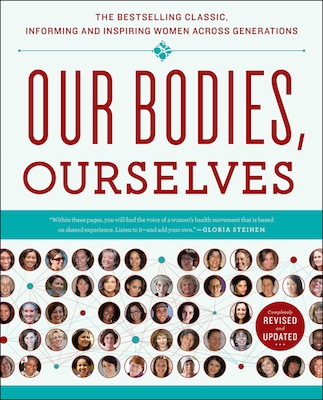 Here are the cliff notes to this review of the new Our Bodies, Ourselves: Get this book. Get it because you have always seen it but never opened it. Get it because you have an older version and want to see what’s new. Get it because you will find yourself in these pages, whether you are cisgender, transqueer, multiracial, menopausal, a parent, a teenager, celibate, not sure you want to have kids or afraid of catching an STI from a toilet seat. Get an extra copy, because in this Kindle age we still need books lying around, making for chance encounters. Get it so that you can leave it on a bookshelf where your daughter, niece or sister can find it during a lone moment in the living room and see what a community of women can build. Get another copy to donate to your local high school. This is a primer not just on our bodies, but on the span of an inter-generational movement.

Like the very first edition of Our Bodies, Ourselves, which celebrates its 40th anniversary this year, the new ninth edition is built directly around women’s voices, with italicized quotes throughout from women talking about their lives. That’s what OBOS is famous for: More than an anatomical guide, the book in all of its editions has sought to showcase women’s voices and women’s advocacy for each other.

The women in the first OBOS were at a point of discovery brought on by the women’s movement, navigating new spaces in work, relationships and public space. Forty years later, the women speaking are in expanded territory: Most work outside of the home, use birth control and have had multiple partners. Their conversations focus less on a world unused to women speaking and more on how to make a variety of women’s voices heard. In an entire new chapter in the form of a conversation, women from diverse backgrounds discuss relationship issues from love to racial differences to growing older. Reading it is a powerful, consciousness-raising experience, like exchanging confidences with your friends or overhearing your aunts talk at the kitchen table.

In the new edition, more emphasis has been given to local and global activism, environmental health risks and navigating American health care. While the 1971 pre-Roe v. Wade first edition covered issues like “The New York Abortion” and how to mail order condoms, 40 years later, OBOS addresses violence against immigrant women, media literacy and emerging male contraceptives. (Did you know that India has already started clinical trials on a reversible injection for men?) Also included are a handy guide to health care reform and an argument for a single-payer system. The editors note that certain topics from past editions, such as nutrition, were omitted because they are well-covered elsewhere. In their stead, the text spends more time on issues such as reproductive rights and environmental health, and stays heartily relevant.

The basics are still there, though. Interwoven with clips from international editions, personal stories and profiles of women’s health activists (including the Empowered Fe Fes, I Am Dr. Tiller and The Unnecesearean) are the very helpful guides to navigating the day-in and day-out biology of a woman’s body.

OBOS is a complete resource–or the closest to one that I can imagine–for women’s health and activism. Not only does the reader find clear, trustworthy information about her body, but also a thorough introduction to the politics of having that body. When you read OBOS, you join a community, one that is growing and changing (as each editions’ increasing thickness testifies to) and that provides the resources to start and keep talking.

Photo of Our Bodies, Ourselves ninth edition book cover. Buy it here.