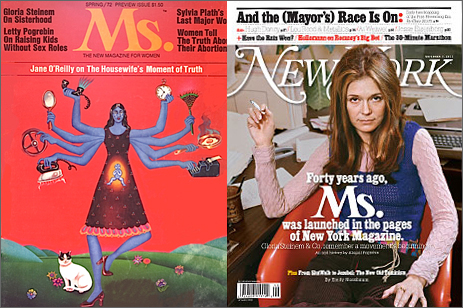 This week, we’re proud to say Ms. magazine is featured on the cover of New York magazine, the place where it all started 40 years ago this December. That’s when New York‘s editor Clay Felker offered to make the very first issue of Ms. an insert in his magazine, where Gloria Steinem was a staff writer.

Their reminiscences about Ms.‘s early days seem to have struck a chord. Here at the Ms. offices, we’ve received an outpouring of response from Ms. readers past and present. Long-time reader Irene Kaminsky wrote in to say:

I just wanted to share with Ms. how much it meant to me in the early years. The article in NYMag reminded me how bad things were when I was starting life as an adult in the ’70s. When I interviewed for jobs after college, I was routinely asked if I was married and when I was going to have a baby. The only jobs available to me were low skill, low wage. Famiy members thought I was nuts to use “Ms.” and laughed derisively at “libber” ideas.

Thank goodness the world has changed. A lot. But the work is not finished, since we only get about 80 cents to the man’s dollar. Keep up the good work for present and future generations.

We’re looking to hear from more early Ms. readers like Irene. If you know one or are one, you can contact us here.

The New York piece dwells on Ms.‘s launch in the 1970s, but there’s a lot more to be told as we approach our 40th anniversary full steam ahead. Over the years, Ms. has been the first to break taboos around crucial women’s issues such as back-alley abortions, domestic violence, sexual harassment, rape on college campuses and the exploitation of women garment workers.

Today, we’re still making change. In the past five years, Ms. reporting has spurred better labor laws for women factory workers in U.S. territory of the Marianas islands and pushed the FBI toward updating its archaic 80-plus-year-old definition of rape.

If you liked the past at Ms., you’ll love the future. We’re still the place feminists turn to for what’s really going on in the world for women’s rights, women’s aspirations and women’s lives. We’re still the ones putting a feminist lens on politics and culture, supporting the goals of the women’s movement(s) nationally and globally, and making change happen.

In the next year, we’re going to be talking a lot about where Ms. has come from and where it’s going. You can stay in touch by joining the Ms. Community and getting issues delivered to your door–including next year’s 40th anniversary special issue! Ms. has been here 40 years; join now and help us thrive for 40 more.

Check in here to stay abreast of all our 40th anniversary events.

Go here to support Ms.‘s work (and see your name in the 40th anniversary issue!)