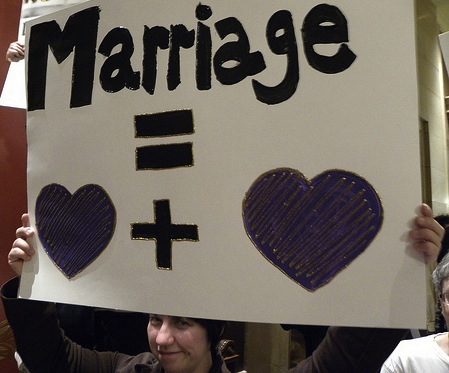 It’s pretty clear that the time has come to repeal DOMA. When DOMA was passed, no one was affected because no one was legally married, because no state had passed a law. That’s changed now.

In the six states plus the District of Columbia where same-sex marriage is legal, 131,000 gay and lesbian couples are now legally wed. As that number continues to grow, the disconnect between the federal law outlawing gay marriage and state laws legalizing it is becoming increasingly unsustainable.

For one thing, DOMA causes knotty problems for businesses when they dispense employee benefits. In fact, 70 businesses and professional organizations filed an amicus brief [PDF] in the Massachussets case challenging DOMA, complaining that the federal law forces them to become the “face of … discrimination” in states where same-sex marriage is illegal. The signatories, who include Xerox, CBS, Aetna, Time Warner, NIKE, Starbucks, Google and Microsoft, write:

In the modern workplace, the employer becomes the face of DOMA’s discriminatory treatment, and is placed in the role of intrusive inquisitor, imputer of taxable income, withholder of benefits. The employer is thus forced by DOMA to participate in the injury of its own workforce morale.

They further chastise the federal government for placing them in a precarious legal bind by forcing them to discriminate:

The American enterprise is accustomed to statutory regimes that are either silent as to, or prohibitive of, workplace discrimination. But a regimen that forces it to discriminate imposes subtle, but real risk.

What this brief acknowledges–that DOMA supporters do not–is the distress and confusion caused by the federal gay marriage ban. (See my Five Questions to Ask Defenders of DOMA from last week.)

DOMA defenders are also stubbornly unwilling to recognize the reality that same-sex marriage is here to stay. In voting against the Respect for Marriage Act yesterday, marriage-equality opponent Sen. John Cornyn offered the following cynical analysis:

Knowing that this bill will never become law in this Congress, I think [today’s vote is] a transparent appeal to a special interest group that our Democratic friends believe is a key to their electoral victory in 2012.

Let’s look at who comprises the “special interest group” Senator Cornyn refers to. In addition to business interests, according to a Pew Study released last week, 59 percent of Millennials, 50 percent of Gen X-ers and the growing majority of Americans favor the legalization of gay marriage.

Even though Senate Republicans are expected to filibuster the Respect for Marriage Act, which is what Senator Cornyn means when he says that Congress will “never” vote it into law, pressure to repeal DOMA shows no signs of letting up. Senator Al Franken, member of the Senate Judiciary Committee and a champion of the marriage equality bill, celebrated yesterday’s victory, telling the press:

This is a good day and it is one step on an inexorable march and I think that’s because we’ve seen in America a real change in attitude.

Supporters of DOMA need to wake up and realize that this law does nothing to prevent same-sex couples from marrying in states that permit them to do so. DOMA unjustly discriminates against lesbians and gay men. Congress needs to follow Senator Feinstein’s lead and pass the Respect for Marriage Act. Or, if John Cornyn is right, maybe that broad-based “special interest group” will bring in some new players in 2012 to get the job done.