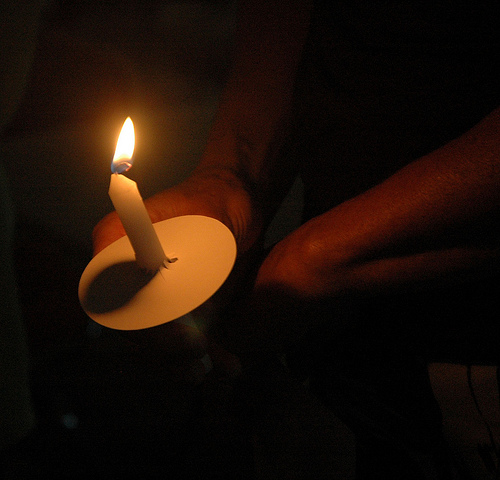 Why does the Penn State community cheer for Joe Paterno? We’ve seen nearly a week’s worth of rallying in support of the legendary football coach after a grand jury indictment made plain that Paterno enabled his longtime assistant’s sexual abuse of children. While the university’s Board of Trustees almost certainly gave Paterno the opportunity to resign immediately, he opted instead to announce his retirement at the end of the season (three regular games and a postseason away). This forced the board’s hand, leading it to fire the coach, along with university president Graham Spanier, Wednesday night. Student rallying turned feverish, and the night ended with rocks and bottles thrown, a lamppost dismantled, and a news van overturned. All of this to protest the firing of someone who could have intervened in the pattern of abuse of young boys by Jerry Sandusky—and did not.

The shouts of Penn Staters protesting Paterno’s firing Wednesday night prompted the rest of the nation to look on in horror at such misplaced passion. It also distracted attention from the parts of the Penn State community that have been organizing and demonstrating in support of the victims of the abuse, articulating their shame at how deep the scandal went in their university. While the pro-Paterno riots unfolded, others continued their demonstrations in support of the victims, carrying signs that read, in one case, “All that is necessary for evil to triumph is for good men to do nothing.” PSU Hope, which appears to be a new group formed in response to the scandal, held a candlelight vigil Friday night on campus, drawing 10,000 participants. (It’s worth noting that at least one sibling of the victims is a Penn State student.) And during Saturday’s home game against Nebraska, many fans wore blue, the official color of the Blue Ribbon Campaign, which fights child abuse.

Thursday morning, a grassroots network of Penn State alumni launched a collaboration with RAINN (the Rape, Abuse, and Incest National Network) to change this story in an active and affirmative way: by raising money to support education and prevention of child sexual abuse. Proud to be a Penn Stater, as the initiative is called, claimed the #ProudPSUforRAINN hashtag on Twitter and aims to raise a minimum of $1 for every one of the 557,000 living Penn State alum. In just a few days, the campaign has raised more than $315,000.

Jaime Needel is part of the husband-and-wife team of Penn State alums that founded the campaign. While she watched the televised images of students showing their indignation over Paterno’s firing, she cried.

“I felt betrayed, and really disgusted,” she says. Penn State “has a really passionate fan base, and Joe Paterno has such a reputation of being this ethical coach. To think that he knew something was happening and didn’t intervene is just unbelievable.”

Penn State’s “incredible energy and momentum,” Needel says, could be channeled somewhere productive in this critical and sorrowful moment. “We want to bring attention back where it belongs: with the victims of the abuse.”

Needel says she doesn’t want Penn State to be known as a campus that is rioting, particularly for such a dubious cause as the overdue accountability of Joe Paterno. “We want to be respected.”

Certainly students are right to feel betrayed, but it is not the media or the Board of Trustees that are the betrayers.

I suspect that nearly all the students cheering for Paterno have yet to experience real, substantive tragedy themselves. So they really don’t understand that by not reporting credible accusations of Sandusky’s abuse to the police, or otherwise putting their full weight behind stopping him, Paterno and other less prominent staffers at the school were wrong. Their inaction likely led to the abuse of more children. This week’s exhibition of Penn State students’ airtight idealism and naiveté translates into rationalization for their hero’s actions—in a manner that frighteningly parallels Paterno’s turning a blind eye to the horrific actions of someone he in turn loved.

Loyalty is a tricky animal. It is, after all, key to what earned Paterno a beloved status in the first place. Loyalty to the sport of football and to his school ignited 45 years of accomplishment and skill that were critical in the development of Penn State as a university. It was loyalty to his longtime friend and partner, who did terrible things that did Paterno in. Ultimately, a loyalty to Penn State may have led Paterno to believe that turning Sandusky in would cause greater harm than what was eventually caused by tacitly permitting the abuse to continue.

Other universities, especially football-centered ones, must take this Penn State debacle as an opportunity to look to their own house. It is painful for those of us who love college football, but there is an epidemic plaguing the sport, and it comes down to corrupt loyalty and misplaced priorities: football programs over people. This is a pattern throughout the sport, not peculiar to Penn State. I hope this Penn State story is the worst I ever see, but I fear that it is not. And I fear what I will never see, because it was covered up completely.

This is a call, then, to integrate and strengthen understanding of sexual assault and abuse on college campuses nationwide, including an emphasis on the appropriate ways to respond to abuse that has been witnessed or reported. This should happen not as a one-off workshop some sleepy Sunday afternoon but as an ongoing, well-funded strategy in explicit connection with athletic departments that provide crucial education on how power, entitlement, and fear uniquely come together in sexual abuse.

Those cheering Penn State students, our future leaders, truly don’t get it. That is what is so terrifying. But. Proud to be a Penn Stater and other groups are examples of fans and alumni providing leadership where our colleges fail: We do not have to wait for them to do something. Combating abuse will be more effective, and more lives will be unharmed, if we work together.

This post originally appeared on The American Prospect. Reprinted with permission.

Anna Clark is a writer from Detroit. In 2011, she was a Fulbright fellow in Nairobi, Kenya. Her writing focuses especially on literature, health, criminal justice, gender, and sports. It has appeared in The Guardian, The American Prospect, Salon, The Nation, The Daily Beast, Grantland and The Detroit Free Press, among other publications. Anna edits the literary blog, Isak (www.annaclark.net), and contributes video book reviews to The Collagist. She has been a fellow with the Peter Jennings Center for Journalists and the Constitution. Anna is a writer-in-residence with the InsideOut Literary Arts Project. She graduated from the University of Michigan's Residential College with highest honors, and from Warren Wilson College's MFA Program for Writers.