14 Questions To Ask in Choosing a Movie For Your Kids - Ms. Magazine
Skip to content 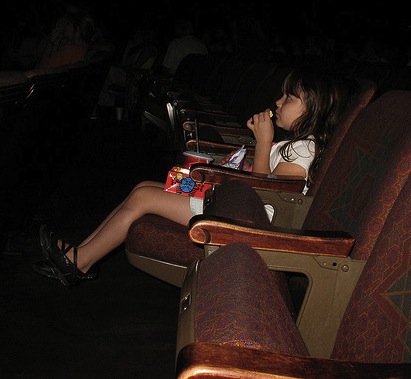 Some of the most sexist programming in America is delivered to our kids through G and PG rated movies: yes, those movies specifically recommended by the MPAA as appropriate for children. The problem is that in the vast majority of these movies, boys get to be the stars. Girls are often relegated to practically invisible sidekick roles. What’s shocking is that so many of these movies are about fantasy worlds where animals talk, sing and dance, but Hollywood seems incapable of imagining a magical world where boys and girls are treated equally.

This holiday weekend, I took my three daughters, ranging from age 2 through age 8, to Puss In Boots. The animation was beautiful. The music was fabulous. But the stars were the boys. The movie centered on Puss’s quest; it was his adventure. Like so many kids’ movies, Puss In Boots is a male buddy movie, in this case about Puss’s relationship with Humpty Dumpty. Kitty Softpaws is a great female character, but the movie clearly belongs to Puss and Humpty.

A couple days later I took my kids to see Happy Feet 2. (It was a long, rainy weekend.) In that film, girls fared even worse. Happy Feet 2 is–surprise, surprise–centered on male relationships; it’s a father-son saga about the penguin Mumble, and his kid Eric. But the movie also features no fewer than three subplots, all three about male relationships. As in Puss In Boots, there is a strong female character, Bo the penguin, but her part was so small that I had trouble even catching her name.

Other choices for kids movies this holiday season? Hugo; Adventures of Tintin; Alvin and the Chipmunks: Chip-Wrecked; Arthur Christmas. Notice anything about the gender of the characters in those titles? Where are the female leads? Last year, Disney actually switched the title of Rapunzel to Tangled specifically to avoid highlighting the female star. Disney did this with no shame at all, giving interviews to media outlets about their decision, and received practically no protest. What message does this blatant sexism send to kids?

As the Geena Davis Institute on Gender in the Media has found, the more media a girl views, the fewer options she thinks she has in life. The more boys watch, the more sexist their views become.

Keep in mind, we’re not just talking about movies. These film characters go on to appear in toys, clothing, food products and video games. When male stars in kids movies are ubiquitous and girls go missing, the gender programming spreads into every aspect of their lives. That’s bad for all kids and the adults they will become. It’s like First Lady training–smile, cheer, be loyal on the sidelines to the male star.

So what can you do if these questions yield many “S”s and very few “G”s? Mostly, I don’t suggest forbidding your kids from watching films. There are some I will not show my kids, and there are many I won’t pay for, but kids live in the world just like we all do. Most of their friends will have seen them, be talking about them, and acting out the characters on playdates. Even if you don’t take them to the movies, they’ll see the characters as toys, or on diapers or cereal boxes. So my advice is to teach kids not to be passive receptacles of media. Studies have shown that discussing sexist media with kids can help inoculate them against its effects. The questions on this list aren’t for young kids but for their parents. When you talk to your kids, bring up these issues, and talk about why this matters.