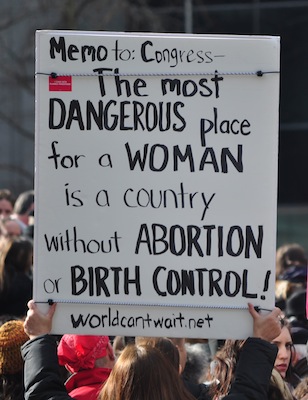 Last week, the UK Academy of Medical Royal Colleges (AMRC), published the world’s largest, most comprehensive and systematic review of mental health outcomes and abortion care. The review included 44 high-quality studies done in developed countries and published between 1990 and 2011.

The conclusion? Having an abortion does not increase the risk of mental health problems. “The best current evidence,” according to the Academy, “suggests that it makes no difference to a woman’s mental health whether she chooses to have an abortion or to continue with the pregnancy.”

A commentary on the study published in the December 17th of the British Medical Journal, The Lancet notes:  “Past studies on the effect of an induced abortion on mental health have been mixed in terms of their quality, findings, and interpretation. Some have shown no harm while others have found associations with mental disorders.”

Last week, the world’s largest, most comprehensive systematic review on mental health outcomes of abortion was published by the UK Academy of Medical Royal Colleges (AMRC). The review claimed to provide a definitive answer: having an abortion does not increase the risk of mental health problems.

According to the Academy’s own statement, the review’s Steering Group and the National Collaborating Centre for Mental Health (NCCMH) at the Royal College of Psychiatrists (NCCMH) “carried out a systematic and comprehensive search of the literature and identified 180 potentially relevant studies published between 1990 and 2011.”

The Steering Group was careful to ensure only the best quality evidence was used, so all studies were subject to multiple quality assessments. In total, 44 papers were included in the review.

On the basis of the best evidence available, the Steering Group concluded that:

The Steering Group recommends that future practice and research should focus on supporting all women who have an unwanted pregnancy.

These results, said The Lancet, “should guide care and advice for women with unwanted pregnancies who need mental health support whatever the resolution of their pregnancy.”

Prevention of unwanted pregnancies is also crucial through education and the provision of contraception. But women still face barriers to accessing these services.

Last week, continued The Lancet, “US Health and Human Services Secretary Kathleen Sebelius vetoed the Food and Drug Administration’s recommendation to make the emergency contraceptive pill, Plan B, available without prescription to all women of childbearing age in the USA. Plan B will not be available without prescription to girls 16 years or younger under the ruling.”

The AMRC’s findings show that Sebelius’s decision is an assault on the mental health of women as well as their reproductive rights. It should be reversed.

We could not agree more.

Take action to help reverse this decision—click here to tell President Obama not to let science and medical standards be trumped by politics.