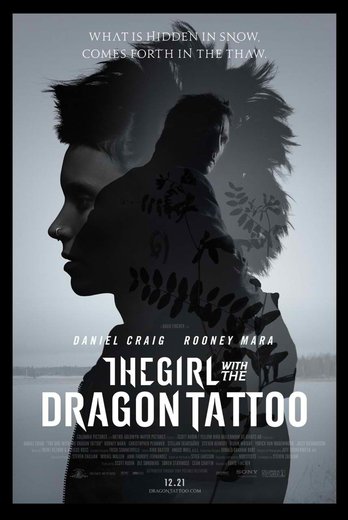 I dreaded seeing David Fincher’s The Girl with the Dragon Tattoo.

In particular, I dreaded sitting through another graphic rape scene like the one in Swedish director Niels Arden Oplev‘s 2009 version of the film–a scene I described in my review as disquieting, intense and vicious. Hollywood being Hollywood, I expected the American version  to take the disturbing material to a new extreme. But when my editor asked me to review it, my curiosity overpowered my dread. In the theater I waited for the scene tensely, but when it came, I found I was able to stay in my seat throughout (unlike during Oplev’s)–though I did cover my eyes at points, because there are some things that we just don’t need to see.

From what I did see, it was graphic. But not as graphic nor as disturbing as in the Swedish film. And in the end the scene was, remarkably, the least remarkable aspect of the movie.

More noteworthy was the film’s interpretation of Lisbeth Salander, the famously feminist protagonist of Stieg Larsson’s bestselling novels. Many moviegoers, myself included, believed Noomi Rapace’s sharp interpretation of the seething, cunning Salander in the Swedish adaptation left little room for improvement. Her Salandar was pitiable and strong by turns, and always unapproachably cool. However, director David Fincher, writer Steven Zaillian and–especially–actor Rooney Mara created a much fuller version of Salander, one more complex and truer (I’m told) to the character in Larsson’s novels.

[SPOILER ALERT: Some details of early events in the film are revealed below. TRIGGER ALERT: Descriptions of rape and violence.]

In the American version, everyone is a little more human and a little more flawed. Blomkvist, as played by Daniel Craig, can be a bit bumbling and passive, letting the women in his life steer its course. It makes sense that this Blomkvist, in a bungled effort to solve the mystery he’s been working on, sends himself into into the villain’s clutches and requires rescue. Bjurman, the guardian who beats and rapes Salander (in the scene I dreaded watching), seems mild-mannered and harmless in some contexts and sadistic in others, like many real-life villains. He viciously assaults Salander, but does so with an entitled nonchalance, and afterwards acts gentle, almost apologetic. This is the reality of abusers: They are pathetic, vacillating between violence and tenderness in an ugly cycle that can confound and entrap their victims.

Salander’s character is by far the most developed, not least because Fincher gives her more on-screen time than Oplev and makes a point of explaining her history. At the film’s outset, she’s a nervous, insecure young woman with a rage problem. Shoulders hunched, she avoids eye contact and accidental touch, and when she knows that she’ll have to interact with someone—say, at work—she carefully crafts her appearance to intimidate and distance. When a man in the subway steals her backpack, she doesn’t react immediately, seemingly afraid of confrontation. When she does decide to go after him, hitting and kicking him on an escalator and snatching her bag, she then runs away—fast—into a train car. Rather than relishing the violence, she appears upset and frightened by it.

I won’t argue, as some might, that she is empowered by raping her attacker. Rather, I imagine that her increasing confidence derives from the realization that, if the men in her society can so easily get away with victimizing women, women can just as easily get away with punishing those men. In a sick way, the playing field is leveled.

This lends all the more poignancy to Blomkvist’s first request of her: “I want you to help me catch a killer of women,” he says. Judging from Salander’s expression, it’s a “click” moment.

As their relationship develops, Salander grows increasingly self-assured and confident. By the end of the film, she acknowledges, herself, that she’s a different person than she was in the beginning—even as Blomkvist remains the charmingly clumsy man he’s always been. This is perhaps the biggest difference between the Swedish and American adaptions. In the former, Oplev paints Salander as a sort of superhero figure—an enigma with a mysterious, checkered past who has finally found an outlet for her rage. Fincher, by contrast, gives us a Salander in transformation—a woman whose personal tragedies and retaliations have set her on a road to realizing her human potential. Like many real-world feminists, she’s still figuring out how to translate her rage into constructive change and, as she does so, she begins to understand herself.