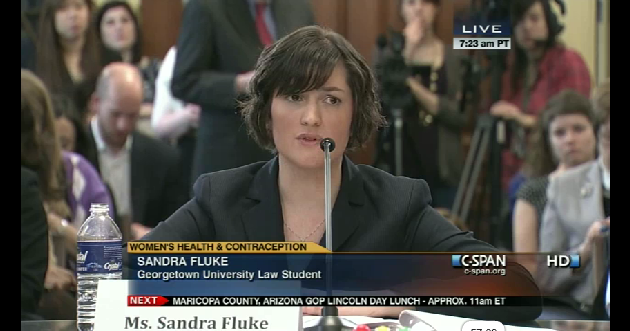 Update: On his next show, Rush refused to apologize and said that women who use insurance-covered birth control should post online sex tapes. President Obama called Sandra Fluke to express his support and House Speaker John Boehner called Limbaugh’s remarks “inappropriate.”  Now there’s a Twitter campaign to tell Limbaugh’s sponsors to drop their ads–three have done so. Join by Tweeting #FlushRushNow! You can find a list of sponsors here.

[Fluke] courageously spoke truth to power. As a result, today, she has been subject to attacks that are outside the circle of civilized discussion and that unmask the strong disrespect for women held by some in this country.

Fluke issued her own statement:

No woman deserves to be disrespected in this manner. This language is an attack on all women, and has been used throughout history to silence our voices. The millions of American women who have and will continue to speak out in support of women’s health care and access to contraception prove that we will not be silenced.

Fluke came to national attention in mid-February when House Republicans refused to allow her to testify at a hearing on whether mandating insurance coverage of birth control violated “religious freedom.” Not a single woman was invited to speak at the main panel, opening Republicans to much subsequent ridicule. (Below, a new Funny or Die video lampooning the all-male panel of women’s health “experts”).

House Democrats held another hearing on the subject, inviting Sandra Fluke as the sole witness. Fluke emphasized the importance of the Obama administration’s rule to ensure that students at Catholic schools, such as herself, have access to contraceptive coverage–both for birth control purposes and to treat a host of medical conditions, such as ovarian cysts and endometriosis.

Today, the Blunt amendment, which would have let religious institutions deny employees–or students like Fluke–full insurance coverage of contraception, was defeated in the Senate. But the fight will likely go on.

Sign here to tell Congressional Republicans you stand with Fluke and other students at Catholic colleges and universities who demand equal access to no-cost birth control coverage.