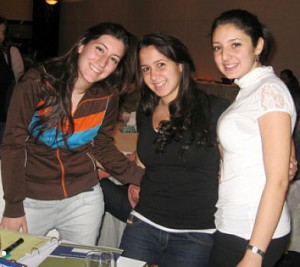 Everyone has a right to speak out about the injustices they see in the world, but how to shape that rhetoric so that people actually listen? That’s something many of us spend years mastering. Mentoring girls in these skills is a central goal of the Women’s Debate Institute, a yearly summer workshop in debate for high school girls.

Debate not only helps students learn how to articulate themselves, it can also lead to successful careers in fields such as politics, business, the law and academia. And yet high school and college debate teams are not always welcoming for women; there’s a sharp drop-off in girls’ participation rates between the novice and senior divisions.

We wanted WDI to help young women create supportive peer networks of their own that would foster an empowering and welcoming environment for women in debate … Enabling women to access to the tools to speak for themselves is critical to the next generation of young feminists. Academic debate is the room where that happens, and WDI is the door.

WDI has been around for 12 years now, but the organization’s switch to a tuition-free model in 2012 makes the camp newly accessible for a generation of young women who may not have been able to attend in the past.

According to executive director Christi Siver, even as recently as last summer she was hearing disheartening stories from attendees about their encounters with sexism in debate and outside it:

I think we are at a dangerous point, what some call ‘the rise of enlightened sexism,’ where the gains of feminism are being taken for granted while the real challenges women face haven’t changed all that much. Helping women find their voice, and building a supportive community, is critical for women to have the self-confidence to advocate on their own (and others) behalf and achieve their goals, whatever they may be.

According to WDI alums, the program is doing just that. Alumna and current WDI director of community building Devin Majkut, who has gone on to judge and coach debate teams in the Pacific Northwest, says that the “powerful female mentors” at WDI taught her invaluable skills for debate and life: “At the age of 16, the WDI made me feel that being a feminist was cool, powerful, important, and would get me somewhere in the world…and it has!”

What about feminists over 18 who are interested in honing their argumentation skills? One great option is the OpEd Project, which offers in-depth workshops to teach women to influence the public debate. Training sessions, which focus on persuasive techniques and owning one’s expertise, are available nationwide, with scholarships based on need.

Part Seventeen in a Women’s History Month series celebrating organizations and ideas that represent the future of feminism.

Photo from Flickr user Seeds of Peace via Creative Commons 3.0.