Eating Up the Hunger Games, Romance and All - Ms. Magazine
Skip to content 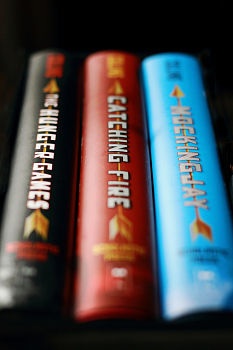 Given Hollywood’s fondness for saturating films with romantic storylines–especially female-driven films–I feared what the cinematic version of Suzanne Collin’s novel The Hunger Games would do to my beloved Katniss Everdeen and her refreshing lack of interest in romance. While I was dismayed when the love triangle meme reared its sappy head in the trilogy of Hunger Games books, I was able to stomach this part of the narrative as it was at least packaged in a somewhat critical way, exploring notions such as love as revolutionary force, the performance of identity and romance as contemporary spectacle.

The Hunger Games, if you’re not familiar with the trilogy, charts the story of Katniss Everdeen, a “tribute” in the 74th annual Hunger Games, a fight-to-the-death reality-TV type of competition that is the only form of media in Panem–a futuristic, dystopian United States beset by poverty, violence, hunger, government control and massive inequality. A society, in short, that mirrors our own. Katniss, an expert archer skilled in survival who has kept her family alive by hunting and gathering in the woods of her district, is forced to take part in the Games and subsequently primped and prepped so as to be a worthy contestant–one who is not only willing to kill her 23 other competitors, but will look good doing so.

As I waited for the film to start, two young girls, likely about 10, danced in front of the screen in I Love Peeta shirts, chanting “Team Peeta! Team Peeta!” (Peeta Mellark is one of the two rivals for Katniss’s love). Saddened that the “team meme” popularized via the Twilight saga and its Team Edward/Team Jacob camps had filtered into this, a (finally!) feminist-friendly saga, I turned my eyes away, determined not to participate in the spectacle. Alas, the movie didn’t allow me to turn away–not only because of its mesmerizing visuals but also due to the way it relied on close-ups and extended shots caressing the faces of would-be-lovers Katniss and Peeta, capturing their every emotion. This, coupled with the “oohing” and “aahing” of the audience at every romantic moment, wouldn’t allow me to distance myself from the romance. This oohing and aahing wouldn’t have been so disconcerting if the audience had also reacted positively to Katniss’s more rebellious, subversive moments, such as when she attacks Peeta for setting her up as his romantic love object. However, much like the citizens of Panem, the film viewers in attendance responded favorably to the lovey-dovey scenes, confirming the book’s suggestion that romance is a great way to divert an audience and effectively tone down any political impulses.

In the book Katniss is reluctant to perform romance, let alone pursue it, but in the film she takes to it all too readily, not even flinching when she receives a reprimanding note from Haymitch Abernathy (Katniss’s alcoholic mentor) after her first peck on the lips with Peeta: “You call that a kiss?” The book, in keeping with its exploration of performance, voyeurism and spectacle, prompts us to question Katniss’s motives and feelings regarding romance: she can be read as strategically acting the part of besotted female. The film, however, loses this more postmodern exploration, offering instead Katniss and Peeta as true star-crossed lovers rather than as pawns in a sadistic game that forces them to act out romance for the sake of the audience. The framing of Gale Hawthorne, Katniss’s friend and hunting partner, as a scorned lover further simplifies the love triangle narrative. Having the camera flash to his jealous reaction each time Katniss kisses Peeta departs from the book’s more complicated explorations of human relations.

The removal of the book’s first-person narrative also promotes a storyline less open to interpretation. Lost is our questioning gaze, embodied in Katniss’ critical voice; in its place, we get Hollywood omniscience which purports to know what audiences want: romance. This narrative shift results in a film that changes Katniss from subject to object. Rather than having the narrative shaped through her, we voyeuristically gaze at her in a way more akin to the traditional male gaze than to the decentering, shifting gaze the book promotes.

This is made obvious in an early scene in the Games, when Katniss looks into a tree, wondering what is making the noise within, while we, on the other side of the third wall, see her face in close-up, as do the “gamemakers” who control the filming of the Games as well as manipulate them. Katniss, however, does not realize her face is on camera in this moment, nor does she knowingly perform for viewers of the Games as she does in the book, shaping her acts in ways both opportunistic and rebellious. Instead of being an actor in the Games, she is a pawn–moved around by the gamemakers, who place fire in her path or Peeta’s lips in her sights. Yes, her skills are crucial, her determination palpable, but by removing her vision we lose her knowledge of the Games as spectacle, her astute realization that if she “performs” romance she will be duly rewarded.

While in the book Katniss recognizes that “one kiss equals one bowl of soup,” and thus reluctantly acts out the part of lovestruck maiden, the film version does not present her as so savvy. Instead, she is “directed” by Haymitch, who has much more influence than he does in the book. Katniss is unaware of his maneuverings, and rather than the exceedingly smart player we get in the book, we have a very skilled one whose story is manipulated by male gamemakers–an apt metaphor for what occurs when female-authored books end up in the male-dominated Hollywood machine.

One of the key lines in the film is spoken early on by Gale: “What if everyone stopped watching?” Here, he refers to the Games, but we might think about this in relation to our own watching of–and desire for–romance. The book suggests that love may be a revolutionary force; the film instead plays on our cultural addiction to it. In the film, even the gamemakers watch the screens when Katniss and Peeta are in view and become distracted from their work. Similarly, when we are seduced into a love story, we ooh and aah and focus on individual characters rather than on critique or analysis.

We are perhaps so hungry for romance not because it fills us up but because it diverts our attention away from the more pressing political problems that shape not only The Hunger Games but our own society. As noted at Bad Reputation, the Hunger Games series is not romance but “an action/thriller/horror with strong anti-war sentiments.” Alas, after its spin in the Hollywood machine, it is much less of a political dystopian text. Nonetheless, I ate it up just the same, trying to savor the more meaty political elements and Jennifer Lawrence’s satisfying interpretation of Katniss while ignoring the empty calories enticingly offered via the sweet romance of the star-crossed lovers.

Photo is of the Hunger Games trilogy from Flickr user WeeLittlePiggy under Creative Commons 3.0.

Women’s Inequality Is Built Into the Laws and Constitution of Iran
Jacinda Ardern Showed the Power of Women’s Leadership—And the Urgent Need for More
War on Women Report: Republicans Propose 150 Anti-Trans Bills; Idaho Republican Says Women Are Like Cows; Trump Glosses Over His Role in the End of Roe