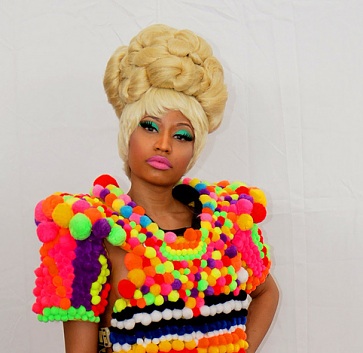 Nicki Minaj is poised to make a splash with her sophomore album, Pink Friday: Roman Reloaded, on April 3. After head-turning appearances at the Grammys and the NBA All-Star Game and with Madonna at the Super Bowl, followed by reports that she landed a multi-million dollar deal with Pepsi, she has emerged as the new “it girl” in American popular culture.

As such, Minaj has become a lightning rod for conversations about race, youth, girls and beauty standards. To some, her provocative videos–such as “Stupid Hoe,” which was reportedly banned by BET for its flashes of Minaj’s nearly bare behind–make her the poster child for the hypersexualization of black women in today’s pop. Others have called her out for perpetuating white beauty standards with her blond wigs, her Harajuku Barbie alter ego and her references to Marilyn Monroe. Ronda Racha Penrice of theGrio.com thinks that the juxtaposition of these images with Minaj’s famously large behind sends a negative double message to black girls: that white beauty icons like Monroe and Barbie are the standard even for black stars and that black female bodies are aberrant and indecent.

All too often, critics make the kneejerk assumption that black girls helplessly fall victim to these troubling messages. It’s true that Minaj embodies the contradictory and confusing media images with which black girls grapple. But those who bemoan popular culture’s negative effect on black girls rarely ask them what they think.

I have asked them. As an anthropologist and a professor of African American Studies, I spent over a decade conducting more than 60 interviews with Caribbean and African American girls between the ages of 12 and 21. I found that these girls are not blank slates who passively receive derogatory representations of black girls. Rather, they have opinions. They are critical of “ideal,” picture-perfect, typically light-skinned celebrities like Beyoncé. They favor “real” women like Mary J. Blige, who emphasize artistry and overcoming adversity.

I first interviewed “Amanda,” a second-generation Jamaican girl, when she was 15 years old. She was critical of Beyoncé and Tyra Banks for not projecting “natural beauty,” instead allying herself with Blige, Kelly Rowland, India.Arie and Alicia Keys, girl-next-door types known for talent rather than flaunting sexuality. When Minaj burst on the scene five years later, Amanda reflected:

Well, she is really good at marketing herself and selling her image. She’s good at selling records but I don’t think I’d go about it in the same way as her … because she uses sex to sell her image … the way she sells herself is not the way I was brought up to handle myself.

Amanda’s keenness is not atypical. Anthropologist Elizabeth Chin studied poor and working-class black girls in Connecticut and found 10-year-olds who asked why “you never see a fat Barbie” and proclaimed, “Barbie is a stereotype.”

Most of the girls in my study cast a jaundiced eye on excessively thin, airbrushed and unrealistic pop icons. At the same time, these girls also find power in celebrities like Beyoncé and Minaj, whose personal triumphs and in-your-face sexuality animate fans to at least imagine a world in which black girls’ bodies might be celebrated rather than demonized. Acerbic critics, they “call out” performers who don’t “keep it real,” but they simultaneously appropriate the artists’ empowering messages. When she was 15, Amanda favored former Destiny’s Child singer Kelly Rowland over her lighter-skinned, more famous bandmate Beyoncé: “Kelly Rowland—she is really for real. Beyoncé is fantasy.”

What “femininity” means is particularly complicated in the cases of performers like Minaj who have multi-ethnic backgrounds and must navigate at least two sets of gender ideals. Commentators have often glossed over Minaj’s Afro- Indo-Trinidadian ancestry, presenting her as “black.” But Minaj’s story is more complicated and it resonates with immigrant girls. Minaj was separated from her mother and raised by her grandmother in Trinidad for several years before reuniting with her parents in Queens, N.Y. Like Minaj, black American girls come from increasingly diverse ethnic backgrounds that include African American, Caribbean, Latin American and African ethnic groups. All have to reconcile their cultural upbringings with American notions of femininity.

Just as we can’t paint black girls’ ethnic identities in broad strokes, we also should avoid blanket assumptions about the meaning of their interpretations of popular culture. Sasha and Malia Obama, for example, have African American, Kenyan and white American heritage, but we should not assume their famous affinity for Justin Bieber indicates a rejection of black heartthrobs, nor that their alternating straight and natural hairstyles signal a seesawing between acceptance and denial of mainstream beauty norms. Put simply, it’s more complicated than that. Minaj’s prismatic wigs similarly defy the easy categories of “black” or “white” hair. Like “the black girl” herself, Minaj is a complex figure who “flips” mainstream norms in a manner that often goes unrecognized.

The media’s oversimplification of Minaj is part of a larger tendency to pathologize and homogenize black girls, amplifying their problems while ignoring their diversity. Take Precious: In over a decade of researching urban black girls, I never met one girl with all of the problems embodied in the film’s pregnant, obese, illiterate, HIV positive, sexually and physically abused protagonist. While many girls have faced some of these issues, they are still canny, critical consumers of pop culture with distinct opinions. If we listen to the voices of black girls we might be surprised at what we will hear.

Photo of Nicki Minaj is from Flickr user CHRISTOPHER MACSURAK under Creative Commons 3.0.