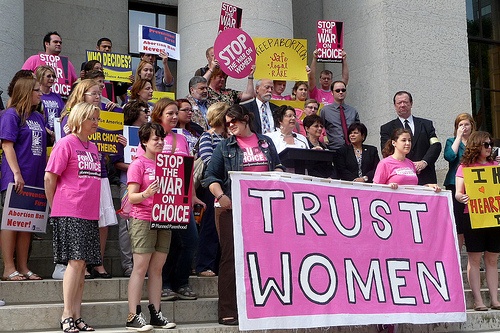 Ninety-nine percent of counties in Mississippi are devoid of an abortion provider. Soon, it might be 100 percent.

On the final day to review general bills, the Mississippi Senate Public Health Committee passed HB 1390, which requires doctors performing abortions to be board-certified OB-GYNs with hospital admitting privileges. Although it sounds reasonable, HB 1390 is another affront to women’s reproductive rights when you factor in the already meager resources available to the women of Mississippi.

Supporters of HB 1390 claim it is in the interest of providing women with better health care. According to Gov. Phil Bryant, who has stated his enthusiasm for signing the bill into law, it is “critically important” to have a certified doctor for “that very complicated procedure.” But what Gov. Bryant and the Mississippi Senate fail to realize–beside the fact that an abortion, prior to the second trimester, is a relatively simple procedure when performed in a clinic–is HB 1390 places both the health of abortion-seeking women and the state’s sole provider, Jackson Women’s Health Organization, in jeopardy.

Admitting privileges for doctors can be difficult to come by: A physician must receive approval by a specific hospital or medical center and, conversely, that particular hospital or medical center can refuse admitting privileges at their discretion. If HB 1390 passes, it will leave the doctors of Jackson Women’s Health Organization floundering for approval from a local hospital. If they fail to receive admitting privileges–which is very likely in the overwhelmingly conservative state–the clinic will be unable to provide abortions to Mississippi women, leaving them with no other option but to remain pregnant, traverse state lines or perform abortions in their own home with the RU-486 pill, which is only successful until the ninth week of the pregnancy.

Although HB 1390 will certainly achieve anti-choice lawmakers’ goal of decreasing the number of abortions performed in the safety of the clinic, it will have other unintended effects. Mississippi holds both the highest teen pregnancy and poverty rates in the U.S. as of 2011, and remains one of the lowest-performing states in the education and health-care sectors. But most alarming is the sad truth that, historically, when abortions are virtually unavailable, women are driven to drastic, unsafe and, frankly, not-so-“pro-life” measures.

Jackson Women’s Health Organization, a state-licensed facility, already has unnecessary hoops to jump through. State law requires the clinic to provide patients with a 24-hour waiting period, an ultrasound and state-mandated counsel that, according to the Guttmacher Institute, is meant to discourage women from having abortions. The counsel must take place in-person 24 hours in advance, forcing many women traveling from distant counties to budget an overnight stay and take off from work or miss several days of school.

Mississippi was the focus of gut-wrenching anti-choice legislation last November, when the state voted on an amendment declaring “personhood” to fertilized eggs–a provision that would have outlawed not only abortion, but also emergency contraception and in vitro fertilization. Although the Personhood Amendment failed, it hasn’t stopped other conservative states, such as Oklahoma, from continuing the “personhood” fight.

Mississippi’s Senate Public Health Committee had an additional two anti-choice bills on the floor today. One was a standard fetal heart detection bill–effectively banning abortions after six weeks of gestation; the other would have regulated the use of RU-486, stipulating it must be taken under the watchful eye of a doctor. Both bills were pocket-vetoed.