The Politicians and the Pagans: Catching Up With Dar Williams - Ms. Magazine
Skip to content 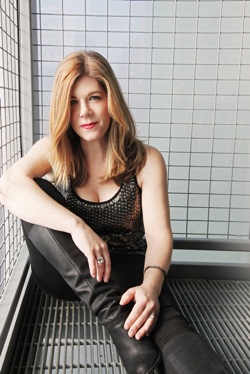 You may remember intellectual-folk queen Dar Williams for her queer-acceptance Christmas carol The Christians and the Pagans, a 1990s mix-tape staple. Although singer-songwriters strumming guitars weren’t hard to come by in those days, Dar stood out for her magnificent gift for storytelling and her radical politics. Her following today extends beyond the Northampton area she called home for many years, although her truest believers may still reside there: Who better to appreciate a song that celebrates lesbian pagans interrupting a stodgy New England Christmas dinner?

Williams releases her ninth studio album this month, and if you lost track of her during the ’00s, now is a good time to tune in. In the Time of Gods explores present-day politics through the lens of Greek mythology.

As a longtime fan of Dar’s, I was delighted to spend an hour on the phone with her discussing the fall of Zeus, the public’s aversion to solar panels, feminist child-rearing and her new album.

Ms. Blog: In the Time of the Gods, like many of your albums, has a novel-like quality; the songs have a subtle connected narrative. What was the story in your mind as you worked on it?

Dar Williams: With the exception of the first one, which is basically just me writing a bunch of songs on my futon when my boyfriend dumped me, every single album I’ve done has to do with some form of power. With End of the Summer I was dealing with authority: the beginning of school, the hinge between summer and fall. The Green World had a lot to do with divine authority. This record has a lot to do with the flights and fancies of having … power. I’m in my forties, I have some power. Some of it comes from being a performer for awhile, but a lot of it just has to do with being a citizen for this long.

Do you enjoy the power that comes with age, or does it have its pitfalls?

The stakes are much higher now. When you’re 22, things feel clearer—but they also don’t mean as much. I could write an op-ed piece that gets printed tomorrow in The New York Times—as opposed to my school paper, or my local paper—and what if I get my facts wrong? You can slip, you can have a moral lapse that costs you your house, or a marriage, or your kids, or you can stay in a marriage when there’s been a moral slip. That’s part of the price of having commitments. You have to hold a paradox in your hands at all times in this Earth.

The Greek characters that populate the album—you don’t really want to cuddle up with any of them.

Not at all. I like Artemis the best. She’s supposed to be Little Miss Frigid, pissed off. But she is actually a guardian of balance. She was a virgin goddess, but she adored her hunting partner, Orion. Her twin brother was jealous, so he sent a scorpion after Orion, and Orion was killed. He found something that his sister loved, and he couldn’t let her have it, so he destroyed it. And he’s Mister God of Beauty and Art! Artemis is a very interesting paradigm for women. She is stereotypically female—she’s very graceful and moon-worshiping—but she won’t have sex with you. I feel like I’ve met that woman, and she is reviled in our society. She lives in the woods and she feeds squirrels and she has a shot gun and she hates your guts. I love her.

Zeus sort of emerges as the “bad guy” of the album.

Zeus is the king of the gods, and he’s this moody, old-school, bolt-throwing guy. And I don’t think that guy does as well these days. With Bill Clinton, who was actually one of the nicer versions of the good ole boy … there was no one clapping him on the back going, “Oh, boys will be boys.” He was not treated with a wink and a nod.

Are you raising your children as feminists?

The feminist in me is more of a gender radical. I love it when I feel like I’m in a place where everyone has the permission to pick and choose from traditional coded gender attributes and take them on as they fit. I think that in a world that has gender liberation, there is a much greater chance for female equality. When I meet a real white-gloved girly girl, I see her as experiencing her gender freedom.

My girl is a hybrid, and so is my boy. With kids you’ve just got to take what you have, and let it grow. Maybe [your child] likes a big blonde bouffant but she’s also a big fan of the gear shift in a truck—so let her have both. At another point you can really do the analysis and break down where that proclivity may have come from—don’t harsh on a kid for liking what she likes.

Has your songwriting changed since you’ve had children?

No, [but] the song I Am the One Who Will Remember Everything [is about] a Goddess of Children, and that goddess doesn’t exist, because the Greek goddess of marriage hates children! The song Write This Number Down is for my daughter. My daughter is from Ethiopia, and the voice of the song … says: I have faith in justice. You have come to a country where you will find justice. And if you don’t find justice, you will find networks of people who want to help you find it. A tip of the hat to Ms. Magazine and the Ms. Foundation–there are ways to find justice within the strengthened ties of the feminist world. It’s not just seedlings of discussions any more. There are organizations that have backbones and money and power, and they operate in the world alongside of the courts and the justice system.

What causes do you lend the microphone these days?

I’m trying to do a tandem project—decommissioning a local nuclear power plant near my home and also encouraging renewable energy. We have solar panels [in my house]—they produce 70 percent of our power. I’m really trying to encourage it on buildings around here. I now see why sometimes journalists lose their minds, because you feel like as soon as you get the information out there, people will act on it. You have to live with the heartbreak of knowing that’s not the way it works, and keep on writing. There’s an enormous amount of discussion and encouragement to be done, [even] amongst the converted. They’re saying “Yeah, that’s a good point. But solar panels don’t really work, right?”

Is it apathy, people who bought organic eggs and think they’re done for the day?

No! No. I don’t get that at all. I get that people deeply care, and that they would love to live in alignment. I think they’re overwhelmed by their lives, and feel cornered. It’s just finding the moment and the aperture to encourage each other along toward sustainability: You give out bean seeds at a concert.

This fall you’re returning to your alma mater, Wesleyan, to teach a college course. Tell me some of the material the Wesleyan students who are lucky enough to get into your class are going to encounter.

My course is called Music Movements in a Capitalist Democracy. Music movements have taken hold here, and they have interplay with the commercial world. The commercial world mirrors them and recognizes them, and sometimes makes a parody of them.

I think it would be fun for [my students] to experience what it’s like to be in a movement, to get their mojo going, and make decisions. Like, how would you react to this? How would you germinate the beginnings of a people’s movement, as opposed to a commerce-initiated movement? I hope they experience that feeling.

Photo of Dar Williams by Amy Dickerson. All rights reserved.

Melissa Bounty is the Senior Managing Editor of Choose Your Own Adventure, an interactive children's book series. She is also an occasional freelance writer, and longtime resident of rural Vermont.