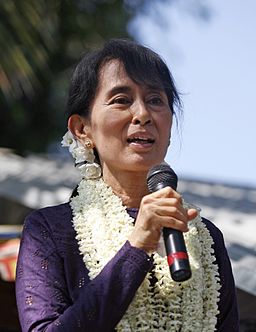 Opposition leader Aung San Suu Kyi was sworn in as a member of Burma’s Parliament today, along with other elected members of her party, the National League for Democracy. The current issue of Ms. has a cover story on the global feminist and human rights icon, from which this is an excerpt:

For two decades, the struggle for democracy in Burma was deadlocked. No ground was given in the war of wills between the country’s hard-line military rulers and opposition leader Aung San Suu Kyi, the Nobel Peace Prize laureate they imprisoned after stealing an election from her. But recently there has been a dramatic shift indicating compromise—by both parties.

After releasing Suu Kyi from house arrest in late 2010, a week after staging parliamentary elections that neither she nor her party could take part in, Burma’s rulers accepted her candidacy for Parliament on the ticket of the once-again-legal National League for Democracy. Just as stunning is Suu Kyi’s decision to run for a Parliament created by a regime she has deemed illegitimate. She called for a boycott of 2010’s elections, frustrating more pragmatic pro-democracy activists. The woman who has long personified the fight for democracy and human rights in Burma has finally decided to engage with one of the world’s most oppressive regimes, even sitting down with President Thein Sein. These are momentous moves for a woman admired for her unbending adherence to principle and could signal a new era for the Southeast Asian country also known as Myanmar.

Although the junta that seized power in 1988 staged a handover last year to a government that is civilian in name, the country is still effectively under military control. Sein is a retired general, chosen by the same regime that placed Suu Kyi under house arrest, on and off, for almost a quarter century. It has gunned down many thousands of protesters clamoring for democracy. It has filled its jails with political prisoners who tell harrowing stories of torture, conscripted ethnic minorities as forced laborers and Big-Brothered its citizens through spies and informants.

Suu Kyi slowly assumed the mantle of “The Lady,” the coded title given to her by Burmese who dared not speak her name for fear of reprisal by the regime. The generals long used her gender to question her ability to lead, calling her a “political stunt princess” and a “Western fashion girl.” But the current president might be the right ex-general for dialogue. Since Sein took power in March of 2011, media censorship has been relaxed, certain types of protest are allowed, labor unions have been recognized and hundreds of political prisoners have been freed.

Experts say that geopolitics explain the dramatic compromises afoot. The U.S. wants to offset the rising global influence of its emerging rival, and Burma, in turn, fears becoming too dependent on Beijing. As a result, the West has reached out to the regime, which has unclenched its fist.

And Aung San Suu Kyi has put her trust in U Thein Sein,” says Aung Din, the director of the U.S. Campaign for Burma in Washington, D.C., who was once a political prisoner in Burma. “The only question for us is whether U Thein Sein will still continue to cooperate with her when she becomes a member of Parliament. Whether he’s sincere or not, we have to wait and see.”

Excerpted from the Winter 2012 issue of Ms. To have this issue delivered straight to your door, join the Ms. community. Comments on this piece? We want to hear them! Send to [email protected]. To have your letter considered for publication, please include your city and state.

Gaiutra Bahadur is a journalist and critic whose work has appeared in The New York Times, The Nation and Ms. She is working on the book Coolie Woman, about women indentured to British colonial sugar plantations.