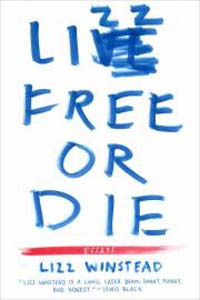 Lizz Winstead is a household name for millions who’ve never even heard of her. At the end of each episode of The Daily Show, right after the “Moment of Zen” and at the conclusion of the credits, her name flashes by, like a subliminal advertisement for women’s genius:

In her new book, Lizz Free or Die, Winstead recounts the beginnings of the show that Jon Stewart would make famous, telling how she found her calling as a political satirist in the 24-hour news/reality TV world of the 1990s and early 2000s. Along the way, she shows how humor can be a coping mechanism and a powerful weapon for fighting ignorance and bigotry, and she reminds us why women need to stick together in fields such as comedy, where they rarely get the credit they deserve.

Winstead calls the collection of essays “messays,” a comically self-deprecating label for a set of really good stories.

They’re the adventures of how I evolved from a girl who just wanted to explore her dreams to a woman who came to understand that my dream was finding a way to use humor to speak truth to power—and ultimately realized that humor is a most useful tool to help put even the most painful moments of life into perspective.

The youngest daughter in a large Catholic family, she grew up in Minneapolis in the 1960s and ’70s, drawn at a young age to the Twin Cities’ burgeoning music scene, where she hung out at secret all-night Prince concerts and caught up-and-coming bands such as the Replacements, Soul Asylum and Hüsker Dü. Upon discovering an aptitude for stand-up, she gave up on college and dedicated herself to mastering the craft of comedy–or, as she puts it, “I dropped out of college to pursue my education.”

Early on, she recognized the importance of women as allies in the comedy world:

I needed women in my life as I embarked on a career dominated by men, many who had the self-esteem of an abandoned pit bull and who weren’t shy about expressing their opinions of me, my humor, and women in comedy in general.

Roseanne Barr, who regularly appeared in Minneapolis in the 1980s, stepped up as a role model, asking to have Winstead as an opener because, as the book reports, Barr “wanted to help out women in comedy”:

She made it a priority to support the thimbleful of women trying to make it in the testosterone factory we were all working in. ‘We gotta help each other, kid, because there is power in numbers,’ she once said to me. I wished I saw more numbers.

This was a time when comedy clubs resisted putting more than one woman on a bill due to what Winstead describes as the “perception that we were all the same, just one long interchangeable man-bashing menstruation monologue.”

Sitting in a bar with a blind date from hell and watching CNN’s coverage of the first Gulf War, Winstead had the early idea for what would become The Daily Show.

It was when I started to realize that our media outlets were as anemic as our foreign policy. The term expert was as overused as the word awesome. The networks’ graphics departments seemed to have replaced their research departments.

As I watched the coverage, I became engaged in writing material in a way that I hadn’t been before. … I began replacing my anecdotes about being a lovelorn thirty-something with observations of a television mediapocalypse.

Together with Smithberg, she created the fake news show that premiered in 1996 and became the gold standard for 21st century political satire. “We were not just going to make fun of the news and the talking heads that were everywhere,” she explains, “We were going to make fun of them by becoming them.” Her love for what she calls her “dream show” is evident and somewhat poignant, given that it would end up belonging not to her but to Jon Stewart. She waxes philosophical about leaving the show in his hands.

When I left [the show] I had one nagging hope for it: that whoever replaced me to raise this baby would see that if they followed the lead of the media, picked their targets wisely and kept giving the audience credit for having a brain, they would raise a gifted child. When I found out Jon Stewart was taking over as host, I knew he would. He nurtured that baby into a brilliant kid, and then a young adult and now it’s a Rhodes Scholar.

But The Daily Show is only one chapter in Winstead’s story (literally, it’s just one chapter in the book). She has also had a successful stand-up career and she co-created the lamentably short-lived Air America Radio network, where she helped nurture yet another exceptional talent–Rachel Maddow–who she hired to be her co-host on a midday show called Unfiltered.

Winstead calls Maddow a “brainful of joy,” and their mutual admiration and shared sense of humor was on display when they met up last week on The Rachel Maddow Show to discuss Lizz Free or Die and the  “War on Women.”

In keeping with a lifelong goal of unmasking political hypocrisy, Winstead isn’t all jokes: She’s been an outspoken defender of women’s reproductive freedom. In her book, she tells the story of how she became pregnant at age 17 and sought help at what turned out to be a so-called crisis pregnancy center, where a woman told the frightened teenager that “Abortion is against our law.”

This woman saw no worth in my growth. She was invested only in keeping me inexperienced, vulnerable, and insecure. And the hailstorm of fear she rained down upon me was to insure I remained ‘manageable.’ Manageable. Because in order to keep the world going the way she and her ilk liked it, I needed to become not what I wanted, but what they needed me to be.

I turned my back on her that day. Her tactics preyed upon my fear. But my fear was that her purpose was going to kill my potential. I could not let that stand.

I didn’t know much about what was happening to me. But even I knew that was not pro life. That was profane.

She has spoken openly about her decision to have an abortion, and last year did a series of benefit shows entitled “Planned Parenthood, I Am Here For You.” For even more Winstead, check out her popular Twitter feed, where she intermingles the personal and political with generous doses of humor and satire.

Lizz Winstead is a sharp-witted truth-teller, and Lizz Free or Die will inspire anyone who has ever talked back to the television or wished they could come up with satire as insightful as The Daily Show. It’s also a book about family, friendship and a zest for comedy that transcends political differences. In good times and bad, Winstead found her way by going toward the light and the laughter. She’s absolutely right when she tells us, self-deprecation be damned, “the sooner you get started reading about my life, the better you will feel about your own.”