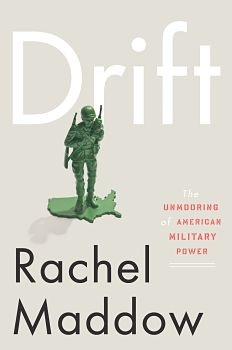 Memorial Day build-up is in full swing across the nation, as we prepare for barbequing, beach-going or simply sleeping in. Alas, few of these preparations involve remembering we are a nation perpetually at war.

As with many other national holidays (Mother’s Day being a prime example), the intent of the day has been lost to consumerism, to another excuse to drink/eat too much and to a profound forgetfulness of the politics that led to it in the first place. As journalist Tom Engelhardt notes in, “How to Forget on Memorial Day: Whistling Past the Graveyard of Empires,”

Quiz Americans and a surprising number undoubtedly won’t have thought about the ‘memorial’ in Memorial Day at all.

This profound forgetfulness underlies Rachel Maddow’s new book Drift: The Unmooring of American Military Power, in which she argues that, as a nation, we have forgotten not only that we are at war, but, more pervasively, that we were founded as a “deliberately peaceable nation” that was decidedly against war spending, executive war powers and military bloat. Because it documents our drift toward becoming a nation no longer focused on peacekeeping but instead on war-waging–and, crucially, on war-waging that profits the few (contractors, corporations, Pentagon and government executives) while extracting immeasurable costs (our economy, morale and morals), Maddow’s book is the perfect anecdote to Memorial Day forgetfulness.

The host of The Rachel Maddow Show argues that–thanks to generations of secretive (and often illegal) warfare and spending, the deliberate shushing of these matters in the media and a corporatized government leviathan that never wants to cut (let alone stop raising) military costs–we are forgetting that war-waging should be the last option, not the go-to solution for every international issue. Deftly documenting this shift, Drift is infused with Maddow’s sharp wit and her vast political knowledge. She dexterously reveals how we became the nation that spends more money on militarism then all other nations combined.

Starting with Thomas Jefferson’s “unnecessary soldier” mentality, Maddow gives a quick history of how the U.S. moved from a newly founded nation that questioned whether a standing army was necessary to a warmonger that had, by the 20th century, been involved in WWI, WWII, Vietnam and Korea. Indeed, it had made war a 24/7 occupation. Maddow spotlights how President Ronald Reagan, whom she characterizes as a national-security nut, played loose with facts in order to justify a massive military buildup, and how the Cold War itself was a crazy concoction that allowed Reagan to take a pickax to the long-standing American disincentive to go to war.

The fallout of this invented Cold War and its surrounding nuclear build-up is terrifyingly detailed in the chapter “An $8 Trillion Fungus Among Us,” in which Maddow covers the lack of “care and feeding” of our nuclear arsenal–an oversight that has resulted in an armory literally infected with fungus growth, sealant failings and massive corrosion on storage and shipping containers. As if this homegrown “germ warfare” were not disturbing enough, Maddow also reveals that the U.S. “admits to having lost track of 11 nuclear bombs over the years,” and how it recently lost track of six nuclear warheads for a day and a half. With dark understatement, Maddow sums up these errors with, “Whoopsie!”

After her illuminating coverage of the Reagan era, Maddow turns her attention to Presidents Bush Sr., Clinton, Bush Jr. and Obama, documenting how each of them continued to treat war like a game of “intercontinental Whac-A-Mole.” But, she argues, it is not only our commander-in-chiefs who put us on this path. A key architect of our national drift has been the man she refers to as “the concentrated distillate left in the bong-water”: former Vice President Dick Cheney.

Characterizing him as a founding father of the privatization of the military industrial complex, Drift sounds a warning call that Maddow echoed forcefully on her May 23 show: Reminding viewers that Cheney believes anything done in the name of national security cannot be designated illegal, she warns us of his close ties with presidential candidate Mitt Romney. Specifically, 17 out of 24 of Romney’s foreign policy advisors hail from the Bush/Cheney regime. Noting Cheney’s infamous response of “So?” to the fact that two-thirds of Americans say our current wars are not worth fighting, Maddow the TV host reiterated a key message delivered by Maddow the author: If we don’t want to continue our drift towards unchecked military spending, untold profits for Halliburton knock-offs and rising war deaths, we had better remember our founding peaceable principles. We should also remember that the executive branch does not have the power to declare war without the backing of Congress–and thus, by extension, the nation.

Though her focus on the dangerous ways war has been both normalized and rendered invisible focuses mainly on the erosion of public debate, the increase in executive powers and the restructuring of the military, Maddow also reminds us of other factors: Our use of video-gaming soldiers who “fly” drones from virtual consoles far removed from the “squirters” (humans) on the ground; the entrenched problem of sex trafficking; and the fact that the CIA now operates as “a secret military force with no visible chain of command.”

President Obama, she suggests, realizes that “There really is nothing that approaches war’s political potency.” Indeed, beating the drums of war is a great way to boost one’s campaign or approval ratings–so much so that it’s now hard to imagine a president or presidential candidate who would, like Jimmy Carter, suggest that something other than war could “rekindle our sense of unity.”

Making war, Maddow argues, “has become almost an autonomous function of the American state.” And yet, this nation-uniting ethos involves such a “minuscule slice of American society” doing the actual fighting and dying–less than 1 percent of the adult population. It’s easier to accept war without question, Maddow suggests, when so few of us have to risk our lives and those who do are hidden by media silence.

Maddow insists there is national culpability for this drift: We cannot simply blame Reagan, Bush, Cheney or Obama. Rather, we as a nation must remember, and not only on Memorial Day, the true costs of war. One way to encourage such remembering, she suggests, is to make war painful for the entire country–to watch news about our war-waging, read about the impact of our militarism on our economy and engage in debates over our national policy.

For example, are we in agreement with President Obama’s recent statement that,

We need … to be ready for the full range of threats from the conventional to the unconventional, from nations seeking weapons of mass destruction to the cell of terrorists planning the next attack, from the old danger of piracy to the new threat of cyber. We must be vigilant.

Perhaps, instead, we should be vigilant about not forgetting that some of these threats are often no more than smoke and mirrors, as with the infamous “weapons of mass destruction” debacle used to justify going to war with Iraq.

Maddow describes our military and weapons prowess as “a fantastic and perfectly weighted hammer,” but adds, “that doesn’t make every international problem a nail.” Or, as put differently by Audre Lorde, “The master’s tools will never dismantle the master’s house.” In other words, we can’t use military tools to wage peace. Nor can we ignore the fact that our large, expensive box of tools is currently used not only to smash supposed threats to our security, but also to smash global economies, environments and humans, both civilian and military.

“The path to American amnesia is worth recalling on this Memorial Day,” wrote Tom Englehardt. If you want to jog your memory, I encourage you to dive into Maddow’s brilliant testament to remembering.

For more Memorial Day history: Race and Reunion: The Civil War in American Memory, by David W. Blight, and This Republic of Suffering: Death and the American Civil War, by Drew Gilpin Faust.

Photo is the cover of Maddow’s book: Drift.