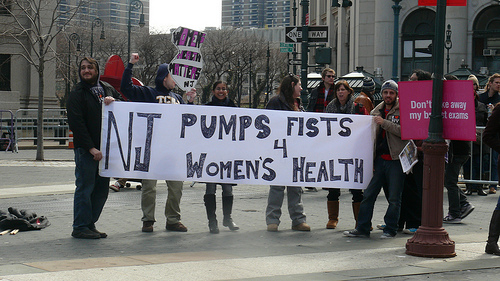 [Update: Gov. Chris Christie has threatened the New Jersey state legislature with using his line-item veto. The governor has until the end of the week to either approve or reject the funding proposals.]

It’s time for New Jerseyans to break out the fist pumps for something other than free vodka shots at the Shore.

The New Jersey State Senate took a major step forward today in its health care reform, approving a bill (S-788) that would restore almost $7.5 million dollars in family planning funds. These funds will go toward women’s health programs and preventive services for women and men, including health screenings, HIV and STI testing and birth control. The bill, which heads to the general assembly today for a vote, will also expand family planning under the state’s Medicaid program, allowing Medicaid-eligible women to receive family planning services.

S-788 seeks to reverse the budget slashing of Gov. Chris Christie, who eliminated the state’s entire family planning fund soon after he took office two years ago, executing what he called “fiscal discipline” and citing a lack of funds as the reasoning. The complete abolishment of the state’s family planning funding was unprecedented and, as a result, Planned Parenthood New Jersey was forced to shut down six clinics and reduce the operating hours and services of its remaining 52 clinics. The cut also affected more than 135,000 women who depend on these clinics for their critical care and preventive services.

This is hardly the first time the state senate has attempted to restore family planning funds and restore Christie’s haphazard budget cuts; rather, it’s the latest step in an exhausting pattern of senate approvals followed by vetoes from the governor. Christie’s ruthlessness—which he claims is the “Jersey way”—was revealed in July 2010, when the brash, fast-talking governor vetoed a supplemental senate bill that would have returned the $7.5 million in grants to the women’s health programs Christie eliminated earlier that year. The fate of this new family planning bill is bleak, too, considering that Christie’s approval rating is currently at its peak. But as bipartisan support in the Democratic-controlled state legislature for women’s health services strengthens, and backlash against Christie’s family planning cuts begin to mount, it’s possible the bill might outlive the governor’s chopping block.

These newfound attacks on family planning—and overall ignorance and disrespect of women’s health care—is uncharacteristic for New Jersey, a state that is not only traditionally “blue” but also staunchly pro-choice and pro-women. For instance, just before Christie took office in late 2009, former governor Jon Corzine sought expansion of Medicaid funds to cover family planning for 70,000 eligible residents. The state also has minimal abortion restrictions. Women’s health in New Jersey, however, is not just being threatened by the governor: Anti-choice groups are attempting to push two restrictive initiatives onto the 2012 election ballot, one of which would ban low-income women from receiving government-funded abortions.

Christie’s brazenness may be typical of New Jerseyans, but his anti-women stance certainly isn’t the “Jersey way.” It’s time to give Jersey girls the family planning and preventive services they deserve.