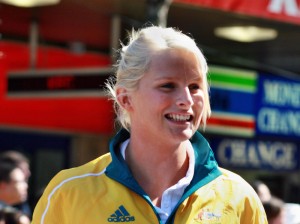 Leisel Jones is the first Australian swimmer to compete in four Olympic Games. She has earned eight Olympic medals during her swimming career, three of which were gold medals. This morning in London, the 26-year-old was “so proud” to finish fifth in the 100m breaststroke final, which was won by 15-year-old Lithuanian swimmer Ruta Meilutyte.

Unfortunately though, none of Jones’ accomplishments seemed to matter when the media posted unflattering pictures of her in a swimsuit.

Instead of boasting about her personal accomplishments before the Games started, the Melbourne-based newspaper Herald Sun questioned her athleticism and even posted a poll questioning if she should compete in the London Olympics. (The poll has been removed.) Some of the photo captions read, “The Olympic veteran’s figure is in stark contrast to that of 2008,” and “Leisel is relaxed, but is she ready?”

Some have argued that these statements are valid because Jones does not have the typical athletic figure. However, her coach, Michael Bohl, claimed that Jones was prepared and in shape, saying “She’s been doing nine sessions a week, and two gym sessions a week coming into this, and we were really happy with her from coming off Santa Clara (in California, where she swam faster than at Olympic trials).”

Despite the debate over the Herald Sun‘s article, Australian Olympic team chef de mission Nick Green was extremely upset at last Wednesday’s press conference and suggested that this was an example of sexism, contrasting coverage of Jones with that of 332-lb. Aussie weightlifter Damon Kelly. He commented,

I think they’re disgraceful, to be honest. I’m disappointed with the articles and I think they’re extremely unfair on Leisel Jones and the work she’s done for the country at this level.

Green is not the only one who supported Jones. Twitter has allowed friends, fans and other Olympians to reach out. Teammate Melanie Schlanger tweeted:

I’m embarrassed by the Aussie media having a go at Leisel, one of Australia’s greatest Olympians. Support athletes don’t drag them down

Recently retired Olympic swimmer, Alice (Mills) Tait explained the effect that media criticism based on body image has on the younger generation, saying, “The questioning over Leisel Jones fitness due to an unflattering photo is exactly what many girls have body image issues! Makes me so angry!”

Despite the media coverage, Jones appears unaffected, saying, “I’m so relaxed and I’m just really enjoying everything about these Games and the lead-up.”

On Friday, there’s one more chance to root on Jones: She’ll swim on Australia’s 4x100m medley squad, which had the third lowest qualifying time coming into the Games.

To support Jones or read tweets from other fans, check out these hashags on twitter: #layoffleisel and #goleisel.

Photo of Leisel Jones from Wikimedia Commons. Screenshot from Twitter.