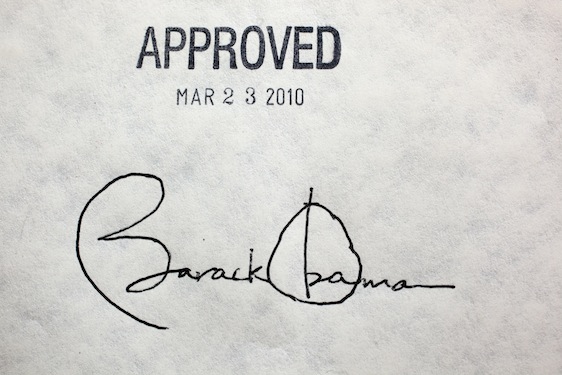 Today, August 1, the Affordable Care Act enacts eight preventive health care services for women’s health and well-being that will be available under all insurance plans–without copays or deductibles. Women leaders in Washington, D.C., have been heralding the passage and subsequent enactment of the ACA as a major advancement for American women—possibly the most significant advance in the last several decades. Representatives from a coalition of more than 50 women’s organizations called HERvotes discussed the act yesterday during a conference call.

“Everything for women is no longer considered ‘extra,'” adds Feminist Majority president Eleanor Smeal, who refers to the ACA as the “Title IX of health care.”

About 47 million women will be afforded these new health care provisions by the end of 2012. These women, according to Pearson, are already covered by health insurance plans and will receive expanded coverage almost immediately or when their plans are up for renewal.

“That number will go up,” says Pearson. “Virtually, all women in private health insurance will get this over time—ultimately, 75 million women.”

About 4 million more women will benefit from Medicaid expansion. And by January 1, 2014, 95 percent of Americans under 65 will have health insurance, either through Medicaid, Medicare or the private sector, says Smeal.

Among the preventive services now open to all women’s insurance plans is copay-free coverage of FDA-approved birth control and contraceptives, including emergency contraception and sterilization methods. Says Jessica Gonzalez-Rojas, executive director of the National Latina Institute for Reproductive Health, “Ninety-seven percent of Latinos have used a form of contraception, but money has been a barrier from using it consistently.”

While birth control seems to have been discussed by every TV talking head and male religious leader over the last two years, it is not the sole benefit women will receive under the ACA. The seven other services enacted today are just as valuable for “creating a healthier female population across the lifespan,” says Dr. Paula Johnson, member of the Institute of Medicine Panel on Prevention Services for Women

Here are the healthy seven services:

Provides women with annual services recommended for their age and development, including prenatal care and mammograms. Depending on the patient, the visits might be more frequent. “This is important because we know the care women receive is usually fragmented,” says Johnson. “Nearly half of all U.S. women are not up-to-date on preventive care.”

Women over 30 will have access to HPV and DNA testing every three years, even if their previous pap smears were normal. This is a much-needed benefit for Latinas, who generally have the highest rate of cervical cancer in the country. “We’re at a critical moment for the health of women of color,” says Gonzalez-Rojas. “The ACA has helped more than 700,000 Latinas maintain coverage.”

Performed for pregnant women between weeks 24 and 28 and for at-risk women at their first prenatal visit. “Moms need a healthy pregnancy to begin with,” says Moms Rising cofounder and executive director/CEO Kristin Rowe-Finkbeiner. “This makes it possible for many more moms to get the important care they need.”

Comprehensive lactation support, supplies and resources will be provided during pregnancy and/or the postpartum period. “Breastfeeding leads to improved immune systems, but it’s not always easy,” says Rowe-Finkbeiner. “Supplies like breast pumps will go a long way to extend the benefit of breast feeding.”

Testing and counseling for sexually transmitted infections (STI) will be available annually to all sexually active women.

Women can now access screening and counseling for domestic and interpersonal violence.

This isn’t even all the Affordable Care Act has to offer women. Women now have direct access to OB/GYN care and no longer need prior approval for services. By 2014, gender rating will be eliminated [PDF] from the individual and small business insurance market. Given that women who live in a state that practices gender rating pay up to 48 percent more for insurance—in some states, the disparity can be as high as 80 percent— premiums for women are expected to decrease.

Though not everybody is going to get all these benefits today—roughly 50 million Americans remain uninsured, a majority of whom are women–“eventually, over time, all health insurance will be required to cover these services,” says Judy Waxman, vice president of health and reproductive rights at the National Women’s Law Center. “These new services … are really a major step forward for all women and girls in this country, as well as women’s partners and children.”