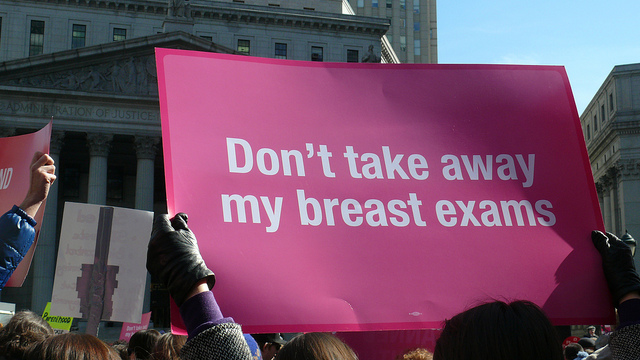 Late on Tuesday, a federal appeals court lifted an injunction that blocked a new Texas law from barring federal Medicaid funds to Planned Parenthood and other abortion provider-affiliated clinics around the state. It’s the latest in a string of affronts to women’s health in the Lone Star State, where the lives of Texan women have been at the mercy of a political pendulum all year.

The federal government responded by withholding all Medicaid funds from WHP—accounting for $35 million, or 90 percent of the program’s funding—if Perry excluded Planned Parenthood from the program. Perry did, and WHP lost its Medicaid funding–until a federal district judge intervened with the injunction. In early May, funds were returned to Planned Parenthood while its lawsuit against the state is pending.

But with the ruling of the 5th U.S. Circuit Court of Appeals on Tuesday, all Planned Parenthood clinics in Texas, even if they do not provide abortions, will again lose their funding until October, when the case goes to trial.

While a federal court in Austin ruled last April that Planned Parenthood had enough evidence to prove that the law was unconstitutional and violated the organization’s free speech and right to association, the circuit court thought otherwise, ruling [PDF]:

Texas’s restriction on promoting elective abortions directly regulates the content of the WHP as a state program. … The authority of Texas to disfavor abortion within its own subsidized program is not violative of the First Amendment right, as interpreted by Rust v. Sullivan. Consequently, Texas’s choice to disfavor abortion does not unconstitutionally penalize the appellees’ speech.

Though the family-planning organization has numerous other services—including cancer screenings, pap smears, HIV and STI testing and routine health visits for both women and men—the appeals court believes Planned Parenthood actively promotes abortion. The Planned Parenthood brand, according to the court, is always associated with abortion because it has “identifying marks” that are “pro-abortion.”

In fact, only 13 out of Planned Parenthood’s 64 Texas clinics, according to the Planned Parenthood Texas website, perform abortion services—and those 13 clinics were never receiving Medicaid funds to begin with (under the Hyde Amendment). The clinics that focus on preventive services also go to great lengths to keep themselves financially separate from the abortion-providing clinics.

As Texas lawmakers are determined to run Planned Parenthood out of the state, their actions are spreading to other, unaffiliated clinics and have already detrimentally affected the health and well-being of Texas women. A recent report by the Texas Observer uncovered that more than 60 women’s health clinics have closed since 2011—the year that the state legislature slashed Texas’ family-planning budget by two-thirds. Only 12 of these clinics were affiliated with Planned Parenthood. The Observer notes that the Panhandle, central and western Texas were the areas hardest hit. And since clinics that have remained open are reducing their hours and services to stay afloat, the Texas Legislature Budget Board estimates that an additional 100,000 women have been affected by these family-planning cuts.

Texas isn’t the only state waging war on Planned Parenthood and hurting other women’s health clinics—and scores of low-income women—in the process. Most recently, New Jersey, a traditionally “blue” state with a favorable pro-choice record that’s now at the hands of anti-choice Gov. Chris Christie, has defunded its $7 million family-planning program for the last three years. As a result, six Planned Parenthood-affiliated clinics were forced to close. The Obama administration, however, has just returned $3.5 million in Title X grants to the state in order to keep the family planning program running. The Obama administration also gave Title X grants to boost Tennessee’s slashed family planning budget and to North Carolina after its state legislature voted to defund Planned Parenthood this year.

Texas, by the way, is home to more than 100 crisis pregnancy centers, which notoriously promote anti-choice propaganda and openly—to use the circuit court’s choice of words—”disfavor abortion.” Though CPCs in other states have recently been tied up in litigation over free speech violations, Texas has yet to question its CPCs.