NEWSFLASH: Personhood Amendment Will Not be on Colorado Ballot - Ms. Magazine
Skip to content 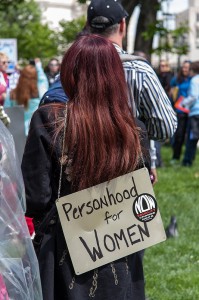 A personhood amendment, which would have defined a “person” at “any stage of development,” including a fertilized egg, has failed to garner enough signatures to make the ballot in Colorado. The petition for Initiative 46 needed 86,000 valid signatures to be included on the November 2012 ballot, but fell about 3,900 signatures short.

If passed, the initiative would have amended the state’s constitution to not only outlaw abortion but also in-vitro fertilization, stem cell embryonic research and various types of birth control, including emergency contraception such as Plan B.

This is the third time a personhood amendment has been introduced in Colorado: In 2010, Colorado voters overwhelmingly rejected Amendment 62 by a margin of more than 40 percent and a similar measure, Amendment 48, was defeated in 2008.

Colorado, the birthplace of Personhood USA, was the last election frontier for the personhood movement in 2012 after similar measures failed to reach the ballots in numerous other states, including Ohio, Montana, Florida and Oklahoma (where the state’s Supreme Court struck down the pending amendment last spring and blocked it from going to ballot). In Mississippi, a personhood initiative (Initiative 26) was rejected by a 58 percent majority in a statewide vote last November.

A number of personhood bills have also been introduced in state legislatures across the nation, but none have successfully made it out of both chambers.

Though Personhood USA says they are hard-at-work pushing for ballot initiatives in the 2014 and 2016 elections, the extremist grassroots movement has remained largely on the periphery. And it looks like voters want it to stay that way.

The Future is Ms.: Tennessee Teens Advocate for Abortion Rights in a Red State
A Nation Without the Hyde Amendment Will Be Safer and More Humane for All of Us
Alopecia Isn’t a ‘Cosmetic Issue’—It’s a Serious Autoimmune Disease