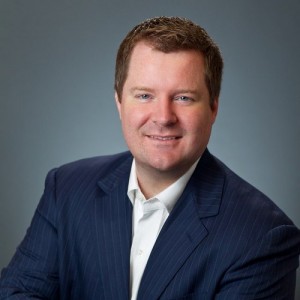 The first night of the Democratic National Convention kicked off with a number of impressive women at the podium, including Congressional candidate Tammy Duckworth, an Iraq war veteran who lost both her legs in combat; Nancy Keenan, the president of NARAL Pro-Choice America; Lilly Ledbetter, the namesake of the Lilly Ledbetter Fair Pay Act; Secretary of Health and Human Services Kathleen Sebelius, who played a huge role in crafting the Affordable Care Act; and, of course, First Lady Michelle Obama.

But it might as well have been a V-Day performance for CNN commentator Erick Erickson, who tweeted last night: 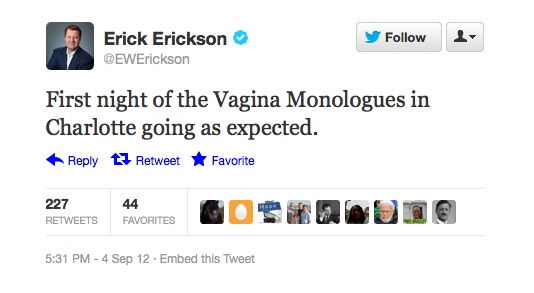 Erickson’s comment, which not only belittles the women leaders at the convention but also Eve Ensler’s seminal feminist play that tackles issues of critical importance to women’s lives, has incited feminist organization UltraViolet to petition CNN to fire Erickson. According to UltraViolet, his comment is not really unexpected:

Perhaps it shouldn’t be that surprising, given his history of insulting women. Earlier this year, he defended Rush Limbaugh’s attacks on Sandra Fluke, saying ‘her testimony before congress that American taxpayers should subsidize the sexual habits of Georgetown Law School students because, God forbid, they should stop having sex if they cannot afford the pills themselves.’

Though Erickson is known for his right-wing views, we’re not sure why he chose to make such a sexist comment about the Democratic National Convention when, just a week ago in Tampa, Florida, dozens of other women leaders, including former Secretary of State Condoleezza Rice, took to the stage at the Republican National Convention.

Is Erickson simply squeamish about hearing words about women’s bodies and their reproductive health, like the members of the Michigan state assembly were? Consider that Erickson followed up his “Vagina Monologues” tweet with this one: 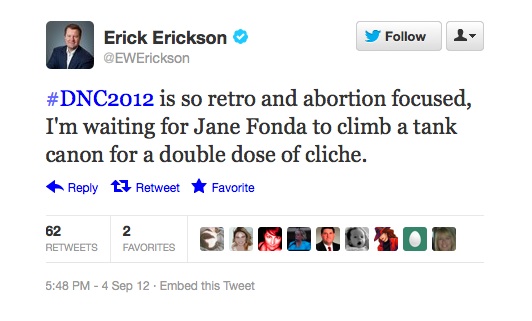 He also took a dig at anti-war feminist group CodePink. But whether Erickson likes it or not, women’s issues have become a focal point of both presidential campaigns. Perhaps next time he should keep his sexist views to himself and let women do that talking.