Occupy Turns One: Women Are the Many, Not the Few - Ms. Magazine
Skip to content 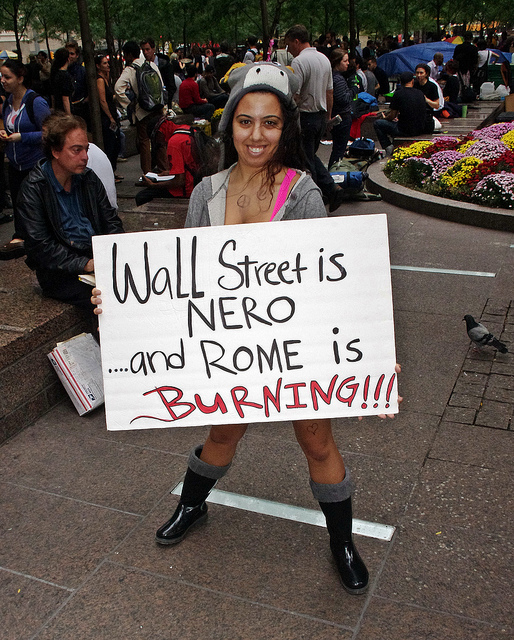 As the Occupy movement celebrates its first anniversary, we revisit an article from the Winter 2012 issue of Ms. magazine. Here’s an excerpt:

In a few short months, Occupy grew from a small New York City encampment protesting corporate influence and Wall Street greed, to a populist movement with more than 2,500 incarnations around the U.S. and the rapt attention of a nation. By the end of 2011, Time had named “the protester” its person of the year, linguists had pronounced occupy the word of the year, and pundits had declared that Occupy had already succeeded in its mission.

Women have been an integral part of the phenomenon from the beginning, grabbing cardboard boxes and blankets and camping out in New York’s Zuccotti Park that first night in September. The first protesters to get national attention were a group of young women who were caught on video being pepper-sprayed by the New York Police Department. Journalist and social activist Naomi Klein was a force of Occupy early on, helping to articulate its grievances and its principles: openness, consensus, leaderlessness, direct democracy.

Women have certainly suffered for the cause: One I spoke with, Occupy Oakland participant and Oakland resident Shanelle Matthews, 27, was tear-gassed in the streets; another, community organizer Aliya Rahman, 29, who camped out at Occupy Cincinnati, was thrown into jail and subsequently caught pneumonia. Women have missed work and been shoved by cops, shouted down by allies and enemies, jeered at and dismissed. Perhaps their zeal for revolution is tied into their position in society. “The more you’re oppressed, the more it’s in your face every day—you tend to be more radical,” says Beatriz Paez, age 31, a queer single mother who is active in Occupy L.A.

It should come as no surprise that women fervently joined an uprising against economic oppression, given that they’ve long borne the brunt of it. As feminists have pointed out for decades, women, saddled with the gendered pay gap and unpaid household work, make up a disproportionate number of the nation’s (and the world’s) poor. And that was before U.S. women were hit by the twin blows of the recession and conservative budget cuts.

For the two years ending in December 2011, men saw a gain of more than 2 million jobs. Over that same time period, women lost 160,000 jobs. Private-sector layoffs have targeted female-heavy arenas such as administrative-support jobs, lost to assumptions that fewer people will do more work in less time. Deficit pandemonium resulted in cuts to public-sector jobs at the state and national levels—and women make up the majority of public-sector workers, dominating professions such as nursing, social work and teaching.

Another major Occupy issue has been home foreclosures. Many in Occupy are furious that banks were bailed out, but homeowners facing foreclosures were not—yet another example of the government privileging the 1 percent over the 99 percent. And once again, it’s a particular segment of the 99 percent who have been most affected: Studies have found that women of color were deliberately targeted by predatory lenders. African American women were 256 times more likely to receive a subprime loan than white men.

“The [bad] economy is an issue for everyone, but women bear a brunt of it,” says Simran Sachdev, a 27-year-old member of Women 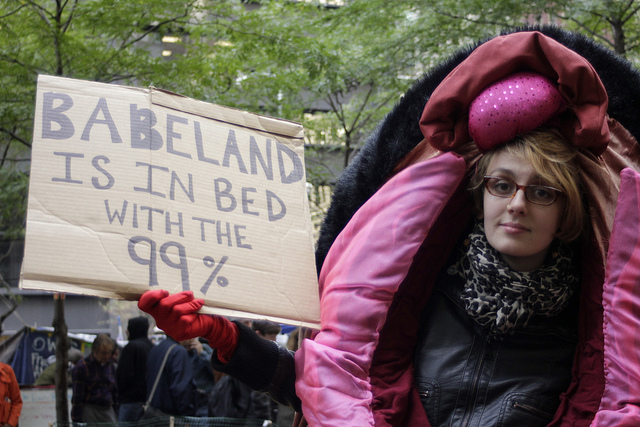 Occupying Wall Street, or WOW—a “female-assigned and female-identified” caucus that foregrounded gender issues as part of New York’s Occupy movement. WOW has a classically feminist focus, concerned about the commodification of women’s bodies and the restriction of rights. Members vent about sexism and praise Planned Parenthood, and their emails are often signed “in sisterhood.”

Many in these groups feel that for the Occupy movement to truly represent the 99 percent, it needs to directly address the injustices that shove women to the bottom of the economic ladder—such as the matters of unpaid domestic labor, inadequate family leave and pay discrimination. As one woman’s sign in Occupy Wall Street stated: “Women do 66 percent of the world’s work / earn 10 percent of the world’s income / own less than 1 percent of the world’s property. End the patriarchy.”

White or male Occupiers are encountering new ideas that challenge their privilege—even within the 99 percent. Shanelle Matthews notes that even at Occupy Oakland, where the area’s tradition of black and queer empowerment meant that intersectionality was on the table from the get-go, “Those people who had never experienced any kind of marginalization outside that economic injustice were frustrated with us [for] ‘diluting’ the conversation with our other ‘isms’.”

Those “isms” can be pervasively subtle, even within Occupy itself. Joan Donovan, an organizer at Occupy L.A. and a sociologist, discovered a gendered pattern by those accusing others of not adhering to process during meetings. “ ‘Process’ is the new ‘shut up, bitch,’ ” she says. “Men will jump the stack; they’ll shout over everyone and people will go, ‘Well let him be heard; he’s making a good point’—because he’s already halfway through.” Women, on the other hand, she said, were more likely to be interrupted or challenged.

No matter what Occupy’s future holds, feminist leaders think the movement has already changed the discourse.

“If Occupy helps people understand that economic policies favor the very rich and increase the burden on the very poor—the bulk of whom are women—that’s enough,” says Feminist Majority Foundation president and Ms. publisher Eleanor Smeal.

Smeal believes Occupy will aid in what she deems the next big economic challenge for the feminist movement: preserving safety-net programs such as Medicaid, Medicare and Social Security, all of which especially support poor and elderly women, and all of which have been in the GOP’s crosshairs. She’s optimistic that Occupy has already taken the wind out of the conservative talking point that such recipients are “entitled.”  “Before Occupy hit the streets, it was all cut, cut, cut—cut the social safety net for the poor; they are the problem. Occupy has put the blame back where it belongs: on the one percent,” she says.

Adds Denise Ginley, a New York photographer, at Occupy and WOW she found “other like-minded women who witness the attack on reproductive rights or the fact that women are paid unequally and they don’t just take it lying down. They’re women who say this is unfair and we have to do something about it.”

Whatever else, Occupy has infused many feminists with new hope—a sense that we can fight back against tenacious conservative narratives; a sense that thousands are poised to pour into the streets to fight injustice; a sense that we are not alone, or, as a popular Occupy slogan puts it, “We are the many, not the few.”