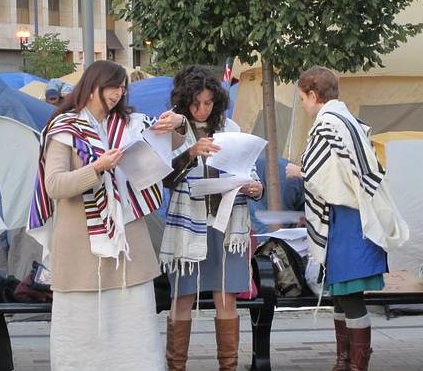 Tonight at Kol Nidre, which marks the start of Yom Kippur, the Jewish Day of Atonement, my husband and I will fight over prayer books, as we do at the start of every service during the Jewish High Holy Days. We own two copies of Gates of Repentance, first published by the Central Conference of American Rabbis in 1978; the one we both want is the new version, revised in 1996.

The first edition is full of heavy-duty masculine god-language, and given that our Reform congregation no longer uses the divine “He” or “Lord,” it makes it hard to keep up with the congregational responses. The newer version self-consciously responds to what its editors call “the modern crisis of faith and the longing for a tradition in which we can feel at home, the new consciousness of women and the need for straightforward and elegant expression.” Still, it’s hard to find any women’s names on the liturgy committee that produced the book or on the acknowledgement page, which even includes the name of the patriarchal, cranky rabbi from the synagogue where I was raised, may he rest in peace.

In general, the newer version has shifted from “O Lord, our God” to “Eternal God,” or just plain “God.” In the references to our forefathers, the editors included our “mothers”–Sarah, Rebecca, Rachel and Leah. Of course most of these changes are in English only–the Hebrew remains as sexist and as male centered as ever.  Every major prayer begins the same exact way–Baruch ata Adonai, Praised be the Eternal God–with the masculine pronoun firmly intact.

I confess:  I’m pretty traditional when it comes to “Avinu Malkenu,” or at least the music for it. I deeply love the folk tune we sang when I was growing up, which seems to have fallen out of fashion lately (it’s not the version Barbra Streisand does). It’s the tune everyone knows and can sing–and I mean everyone. When we do sing it, the sanctuary fills with a wave of sound that rises from the congregation–the largest of the year in every synagogue in the world. That wave sweeps over me, my eyes usually fill with tears, and I’m suddenly a young girl standing in the synagogue of my childhood, between my sister and my mom (my dad would be off ushering, or standing with the men outside, some years listening to the World Series on their transistor radios). I’m wearing my new school clothes, which we couldn’t wear to school until after we had shown them off at High Holy Day services. “Oseh imanu, tzeddakah v’chesed” we would all sing, swaying, eyes closed: Cast over us your justice and loving kindness. …” The new tunes for “Avinu Malkenu,” which I know are also beautiful, do nothing like this for me.

Would I want to change the words, as some feminists and egalitarian groups have tried? I don’t know if I could; the Hebrew seems so deeply imbedded in my spiritual consciousness. I worry about the words in English, to be sure, but when I sing them in Hebrew, all I hear (or, perhaps, choose to hear) are the emotions.

Is there any escape from the patriarchal weight of the language? Are there times when we simply don’t have a good alternative to tradition? I feel caught between my feminism and my capacity for a spiritual moment.

Adrienne Rich, who once described her own Jewish identity as “split at the root,” wrote in  her poem, “The Burning of Paper Instead of Children,” “This is the oppressor’s language / yet I need it to talk to you.”

Do you feel that same pull between tradition and feminism in your religious or spiritual practice?