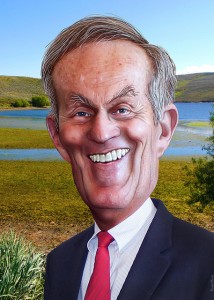 Todd Akin is at it again.

I’m sure you’re no stranger to the infuriatingly ignorant remarks regarding “legitimate” rape that the Missouri congressman and Senate candidate made this past August. Even after calls for him to step aside, Akin has forged onward with an unapologetic, misogynistic vengeance, and he’s been a loose cannon the whole way.

After his first debate with opponent Claire McCaskill, Akin compared her approach to that of a wildcat, claiming she had taken a more “ladylike” approach in 2006 when she faced off against Jim Talent. “She was just furious and attacking in every direction, which was a little bit of a surprise to us,” Akin remarked to a small group of supporters and activists following the debate. He went on to claim that McCaskill had taken an aggressive stance because she was concerned about her reelection chances. Of course a woman who comes on strong (during a debate, against her opponent!) must be doing so out of desperation rather than a rhetorical strategy, right?

In another recent Akinism, when asked why he opposed the Lilly Ledbetter Fair Pay Act, the candidate said, “I don’t think the government should be telling people what you pay and what you don’t pay.” It’s also been revealed–by Akin himself–that he was arrested for taking part in an anti-choice demonstration that may have been an illegal blockade in front of an abortion clinic.

Mr. Akin, we might compare you to a honey badger. Or a dinosaur.