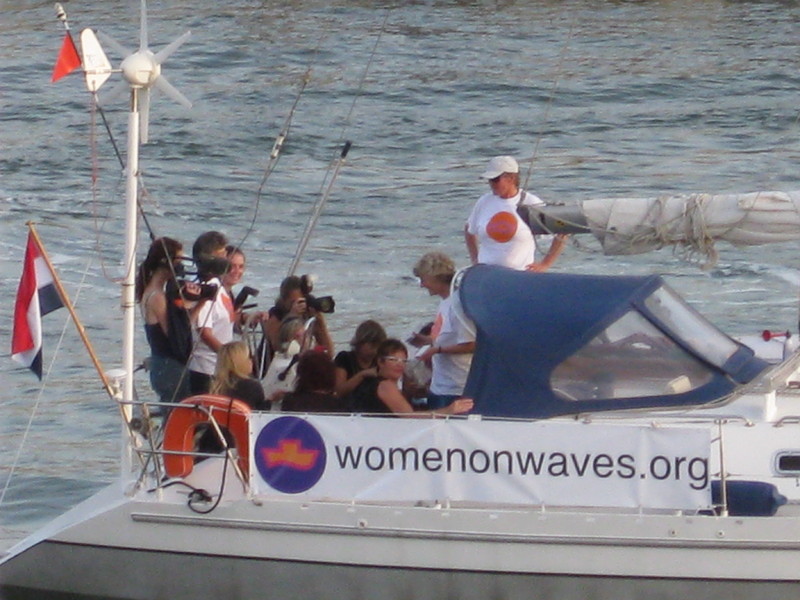 The Dutch NGO Women on Waves announced last Friday that it will sail to Morocco with its abortion-providing ship at the invitation of M.A.L.I (Mouvement alternatif pour les libertés individuelles). Twelve miles from Moroccan territory, in international waters, Women on Waves can provide safe and legal abortions according to Dutch law.

According to the World Health Organization (WHO), unsafe abortions lead to 13 percent of maternal mortality worldwide. In Morocco, approximately 600 to 800 abortions are performed daily, many of them carried out by unsafe methods that can result in serious health complications or death.

Founded in 1999 by Dutch physician Rebecca Gomperts, a 2007 honoree of the Feminist Majority Foundation’s Global Women’s Rights Award, Women on Waves is committed to promoting access to safe abortion services in countries where this healthcare is restricted. In international waters, 12 miles out to sea, the laws that govern a ship are those of the country in which it is registered. Therefore, operating on a Dutch ship, Women on Waves can safely and legally administer an abortion pill to women from these other countries. Women on Waves works under the philosophy that a woman’s right to a safe abortion is fundamental to her freedom as a human being.

The organization’s maiden voyage was to Ireland in 2001, followed by campaigns to Poland (2003), Portugal (2004) and Spain (2008). These voyages have not been without danger. On the journey to Dublin, the FMF had to provide threat management assistance to the staff and crew and work with Irish law enforcement to respond to possible violence from anti-abortion extremists. Then on the Polish expedition, the people on the boat were called murderers and assaulted with red paint as they pulled into port. Despite hostile greetings they may receive, Women on Waves has made serious headway in some of the nations they visit. Soon after their voyage to Poland, public opinion polls shifted in favor of abortion rights from 44 percent to 61 percent.

The ship’s campaigns are primarily designed as a symbolic action to create heightened political and social awareness; they are not a practical solution to the public health issue of unsafe abortion. Besides offering abortions at sea, Women on Waves simultaneously collaborates with the country’s local women’s groups and activists to educate them on how to obtain safe abortions, even when the political situation in their country may prohibit this basic human right.

The upcoming voyage to Morocco has the additional purpose of teaching women about the availability of Misoprostol, which a woman can use to induce a safe abortion herself. In Morocco, many women do not know how to access this abortion pill–knowledge that could be critical in this Islamic nation, where the liberating zeitgeist of the Arab Spring seems to have bypassed.

Tomorrow, October 3, Women on Waves will issue another press release in which the location and arrival time of the ship will be revealed.

Constitutional Rights for the “Unborn” Would Force Women to Forfeit Theirs

The Ms. Q&A With Ani DiFranco: “You Have License To Be All the Aspects of Yourself and To Be Unashamed of Them”
Tina Tchen Makes the Economic Case for Investing in Care Infrastructure and Talks Violence Against Asian Women
The Crime Hidden in Plain Sight: An Interview with Amy Ziering, Director of ‘Allen v. Farrow’