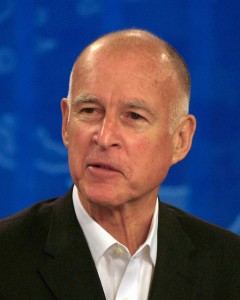 A lot rode on the shoulders of California Gov. Jerry Brown this past weekend, as a multitude of bills required his signature or veto prior to Sunday’s midnight deadline. While Gov. Brown (left) deserves credit for passing positive legislation, such as the ban on LGBT “conversion therapy” and a law allowing certain undocumented immigrants the right to obtain a drivers license, he also made a very disappointing veto.

AB 889, or the California Domestic Workers Bill of Rights, would have provided private domestic workers–including housekeepers, childcare providers and caregivers–with basic employee rights such as overtime pay, meal and rest breaks, paid vacation days and paid sick days. It would have made great strides in protecting a vulnerable workforce largely comprised of immigrant women, many of whom currently suffer from mistreatment and labor labor violations under private employers.

“The members of this important and growing workforce come from many cultures, speak a variety of languages and are 93 percent female,” Ai-jen Poo (right), director of the National Domestic Workers Alliance (NDWA) and someone The New York Times dubbed “The nannies’ Norma Rae,” wrote in The Huffington Post.

These workers bathe, feed, care for and ensure 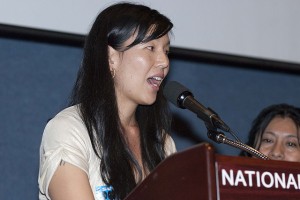 the health and safety of our family members. Yet, California fails to grant them basic labor protections.

Poo, who has worked on behalf of immigrant women’s rights since 1996 and assisted with the startup of Domestic Workers United in 2000, describes domestic workers as “doing the work that makes all other work possible.” For this reason, among others, Poo said in a press call today that the work these women do is vital not only to the families they aid but also to the economy. Domestic workers provide necessary support to their employers’ families, often essentially raising their children, so that their employers can practice their professions. Poo compares the plight of domestic workers to working in the Wild West–because these women do not work under a centralized employer and, in the case of undocumented immigrants, fear speaking up about their rights because they fear deportation. Also, they endure varied, unpredictable work conditions and tend to work long, difficult hours for below-minimum-wage pay. Though these women provide an integral service and deserve respect, the absence of laws securing their rights further contributes to the rampant sociopolitical inequality that plagues the United States.

Gov. Brown, after referring to the work domestic employees undertake as a “noble endeavor,” nonethless said that the bill “raises a number of unanswered questions.” He added in his veto message [PDF] that he finds it “more prudent to do the studies before considering an untested legal regime for those that work in our homes.”

Many were baffled by his decision and reacted with anger and disappointment. Said San Francisco Democratic Assemblyman Tom Ammiano, who sponsored the bill,

Gov. Brown missed an opportunity to prove himself as a leader in civil rights by ensuring that the people caring for California’s children, people with disabilities and the elderly no longer have to go without proper sleep or meals … His veto sets back labor rights in California.

Due to its size and large immigrant population, California has taken center stage in the discussion of protecting domestic workers. The bill received widespread support and media attention, including a videotaped endorsement from actor and comedian Amy Poehler. Had it been signed into law, it would have been a very public victory for women immigrants in California, and likely would have influenced other states to pass similar measures. California would have been just the second state to have a Domestic Workers Bill of Rights–the New York State Legislature passed a similar law in the summer of 2010.

Though it’s a setback, this veto will certainly not discourage Ai-jen Poo and NDWA from pursuing their cause. RH Reality Check reports that the group’s strategy only partly concerns state laws:

Aside from their state legislative strategy, advocates have focused on mobilizing the many stakeholders who are affected by the rights of domestic workers, as a means of building awareness and changing hiring practices. NDWA has already brought about change by influencing employers.

Activist and author Ellen Bravo notes during today’s press conference that grassroots attempts to expand and protect domestic workers’ rights have been increasingly successful due to the breadth and depth of supporters such as small business owners and public health advocates across the country. With such widespread support, this campaign will continue to gather momentum. Said NDWA in its post-veto statement:

[Gov. Brown’s] decision is not the one we wanted, but it does not shake our commitment to winning in California or building a national movement. Even in the face of setbacks like this one, our movement for dignity, respect and labor protections for domestic workers grows stronger. We know that our work to make the world a more just place for domestic workers—and for all of us—is the work of a lifetime. And one governor’s poor decision will not derail us.

NDWA parallels the activism of domestic workers to those in the civil rights movement, reminding us that the road to justice is often long and arduous. Even though the California effort fell short, a national movement is in the making, with NDWA working to pass similar legislation in Massachusetts, Illinois and Hawaii. And the group plans to introduce Domestic Workers Bill of Rights laws in at least two more states next year.