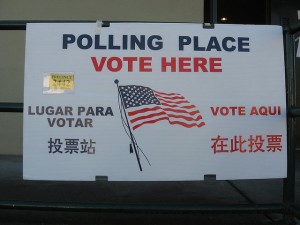 This election, four civil rights-related issues of note will be on ballots in Alabama and California.

In Alabama, citizens will have the power to remove the grossly outdated presence of racial segregation in the Alabama constitution.

California could join Illinois, New York and many others as the next state to ban capital punishment, taking the U.S. one step closer to eliminating the death penalty nationwide.

The California ballot will also feature a couple of measures that establish rights for victims of sex trafficking and adjust a draconian criminal provision.

If passed, this measure would remove remaining “Jim Crow” provisions from the Alabama constitution. Most notable among these is a reference to segregation by race in schools. The amendment would additionally repeal Section 259, which grants the use of poll taxes to support public schools in the counties where those taxes are collected.

The “Savings, Accountability and Full Enforcement for California Act” would replace the death penalty with life without parole as the maximum sentence for murder in California. If passed, it would apply to persons already on Death Row and provide $100 million for law enforcement agencies to help solve more homicide and rape cases. Proponents of the bill insist that California taxpayers will save [PDF] $130 million each year by replacing Death Row with life without parole, and emphasize that convicted killers will remain behind bars forever while no innocent persons will be executed.

According to the measure’s website, California is among the worst states in the country on laws protecting children from sex trafficking. If passed, this measure would greatly improve California’s standing in comparison to other U.S. states that have passed similar laws.

The Three Strikes Reform Act would impose a life sentence only when a “third strike” felony is “serious or violent,” involves firearm possession or specific drug or sex offenses, or if a prior conviction was for rape, murder or child molestation. Supporters of the measure argue that California’s current “three strikes” law imposes a life sentence for almost any crime–such as petty theft or minor drug charges–if the defendant has two prior convictions for “serious” or “violent” crimes. Under the new law, repeat offenders would serve double their original time rather than a life sentence.

More than 3,500 inmates in California are currently serving life sentences under the current three strikes law for non-serious and non-violent crimes. If the measure passs, incarcerated felons who no longer meet the new “three strikes” criteria may be reevaluated. Though this measure would benefit repeat offenders who commit minor crimes for a third strike, it would do nothing to protect rapists, murderers and child molesters.