What If "The Sessions" Focused on a Disabled Woman? - Ms. Magazine
Skip to content 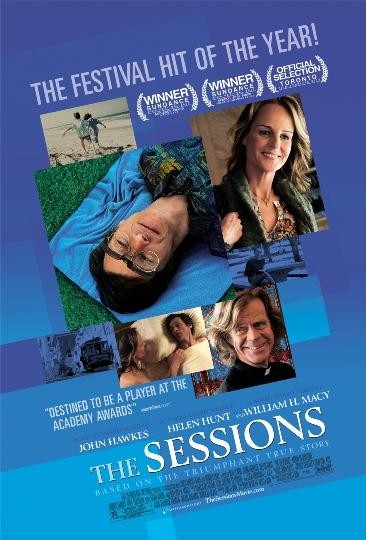 We went to see The Sessions because we were intrigued by the notion of seeing a woman sex therapist on screen. This independent film seemed like it would be an atypical or maybe even a transgressive depiction of a woman in charge of herself and her sexuality. We were also heartened by the trailers that suggested a sex-positive film dealing with disability. And we we were almost satisfied.

As the movie begins, we see Helen Hunt as Cheryl Cohen Greene, a sex therapist living a “normal” life in the late 1980s. She is married to a man who does not seem to do much but mind the house and read all day. She also has a son who looks and acts like a typical self-absorbed teenaged American boy.

She’s assigned by the agency she works for to see a 38-year-old man, Mark O’Brien, who has polio and spends most of his time in an iron lung. He is a journalist who interviews disabled people about their sexual lives, and those interviews heighten his desire to discover his own sex life. He is a virgin, determined to lose his virginity.

Cheryl begins the first of six scheduled appointments in her matter-of-fact, supportive way, encouraging him to let her know what feels good and doesn’t. (Yes to fondling his hair, no to caressing his ear). As he gets better at coordinating his arousal with her body, the connection between them deepens. They stop at four sessions because he has lost his virginity and the emotional terrain between them has gotten quite complicated. (He is falling in love with her soft, knowing touch and humor. She is taken by the Rumi-esque poetry he writes and his witty, openhearted ways.)

On one level, the movie makes you feel good because it allows you to see how kind and generous people can be. And we were pleased to see a man who had neither seen nor touched his own genitals since he was six years old having sex that brings him joy. The movie moves us forward in terms of sex-positive images for people with disabilities, reinforcing a lovely link between intercourse and intimacy, between sexual arousal and open communication.

At the same time the film seems to cover some of the same old ground. We can’t quite imagine that the sexuality of a disabled woman would be given the feature film attention granted to Mark O’Brien’s story. The people in the film rightfully believe that it’s Mark’s human right to have sex. But we wonder if the normative assumption that disabled women are too damaged to be good sexual partners would block a parallel film focusing on disabled women’s pleasure. In fact, there is a small part in the film, played by Jennifer Kumiyama, for a woman in a wheelchair who loves sex. But we never really get to be inside of her head or see her as embodied sexually.

While it appears that Cheryl has control over her life as a sex therapist, we watch as her husband convinces her to do something she did not seem to want to do (converting to Judaism to please his mother) as she struggles mightily to maintain boundaries with Mark. She seems to have autonomy, but we see that she is still under the thrall of male dominance. Cheryl ends up going through the ritual of conversion despite her hesitations, and it is never clear if she is granted the emotional closeness with her husband that she experienced with Mark.

Stereotypes also plague the film: Cheryl’s Jewish bookish husband seems oddly passive and able to intellectualize her job, while Cheryl is portrayed as a Catholic girl (and we know about them). The central Asian woman is bookish and masculine, even as all of the white women wear flowing dresses and girly shoes.

Finally, we never see Mark’s penis, even as Cheryl’s breasts and buttocks are in full view much of the time.

We recommend seeing The Sessions, however. John Hawkes’ performance as Mark is brilliant–particularly since all his sentiment and intonation needed to be communicated with his face. Helen Hunt is equally nuanced. Pay attention as well to the audience as you watch–the graceful quiet in the audience when intimacy fills the screen. But, if you are like us, you’ll wonder how the film might have been different if an actor who actually had polio had been cast and how the film might have grown if Helen Hunt had been able to hold her own with her husband. Plus, we never get to learn if she had a satisfying sexual life with him. Also, what if the Asian woman caretaker played by Moon Bloodgood had partnered with Jennifer Kumiyama, the woman in a chair who first empowered Mark with her stories of fabulous sex? What if Moon and Jennifer had been the center? How about The Sessions 2?