Lawmakers and the media alike have long talked about reproductive rights as divisive political territory—but new data shows that a majority of voters agree that abortion should be safe and legal, even in so-called red states.

Although the numbers vary by party affiliation, with 81 percent of Democrats and only 43 percent of Republicans declaring their support for Roe v. Wade, 67 percent of American voters who participated in a nationwide poll by the Kaiser Family Foundation reported that they do not want to see the landmark Supreme Court case legalizing abortion nationwide, overturned. According to another study by Data For Progress, there is no single state where a majority of voters do not support abortion rights. 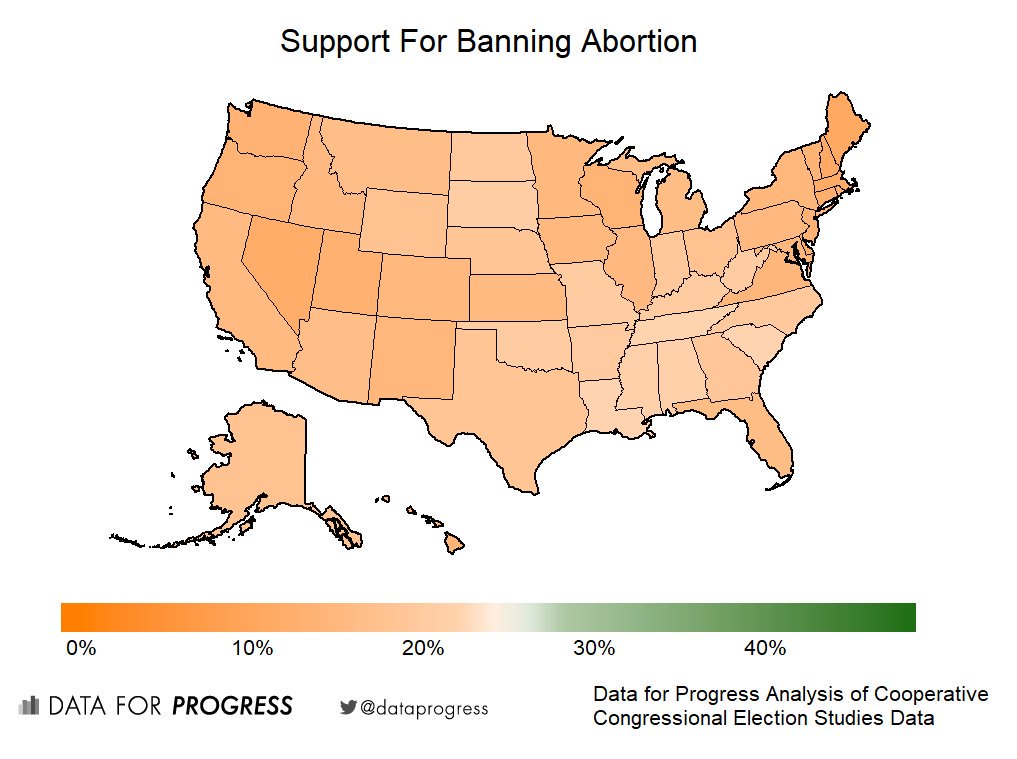 “The idea that abortion is controversial is actually a fabricated myth,” feminist activist Liz Plank recently told The Hill. “In fact, if you look at the President’s approval rating, abortion is more popular than Donald Trump.”

All of the candidates on Trump’s short list for the soon-to-be vacant seat are members of the conservative legal organization The Federalist Society, one founded on the principles of originalism—meaning that its affiliates, like late Justice Antonin Scalia, believe that the Constitution should be interpreted exactly how the Founding Fathers intended when they wrote it in the 18th century, leaving little room for protection of women’s rights, LGBT rights, civil rights or the right to abortion.

The retirement of Justice Kennedy leaves the fate of Roe hanging in the balance; recently, the President himself remarked that one day, abortion rights may go “back to the states,” a reference to overturning the decision, and he has previously promised to ban abortion and even suggested “punishing” women who have them. During the 2016 campaign, Trump boasted that he would be nominating anti-abortion judges to the Supreme Court; Vice President Mike Pence declared that Roe belonged on the “ash heap of history.”

A majority of U.S. voters disagree—and so do the feminist lawmakers and advocates leading the fight to protect Roe and the balance of the Court.

The vote to confirm a nominee in the narrowly GOP-led chamber could come down to one vote. Many have their eyes on Republican senators Lisa Murkowski and Susan Collins, two Republican Senators who previously bucked party lines when they voted to reject Trumpcare. Feminist Majority President Eleanor Smeal, however, is one of many advocates insisting that the Senate delay a vote on a Trump nominee for the seat until after the midterm elections.

“We have every right to demand that the Senate wait to vote on a Supreme Court nominee until after the November elections,” Smeal wrote in an email to members. “In 2016, Senate Majority Leader Mitch McConnell refused to even hold a hearing for Obama nominee Merrick Garland even though the election was nine months away. All we are asking is for the Senators to follow the Mitch McConnell rule, just like they did in 2016.”

Democratic lawmakers like Kirsten Gillibrand have come out swinging against the names on Trump’s short list, vowing to reject all of his nominees should they come to the Senate floor for a vote. “Take [Donald Trump] at his word,” Gillibrand wrote on Twitter. “He wants to ‘punish’ women for exercising their reproductive freedom. He promised to nominate to SCOTUS someone who would ‘automatically’ overturn Roe v. Wade. We need to fight like women’s lives and freedom are on the line. Because they are.”