The Ms. Q&A: What Ada Limón is Carrying Through the Trump Era
Skip to content

Ada Limón’s latest book of poems is a jarring reminder of the ways in which the personal remains political—and the strength it takes to navigate both. The author of five books of poetry—including Bright Dead Things, Lucky Wreck, This Big Fake World and Sharks in the Rivers—returned in August with a selection of work that bravely explores agency, power and autonomy. Inside, Limón, who currently serves on the faculty of Queens University of Charlotte Low Residency M.F.A program and the 24Pearl Street online program for the Provincetown Fine Arts Work Center, writes frankly and ferociously about racism, fertility and gender roles—and even drafts up a new National Anthem.

The Carrying was released by Milkweed Editions in August. To mark its emergence, Limón talked to Ms. about how feminism shapes her work, what it means to write from a mixed-race perspective in Trump’s America and what women across the country are carrying on their way to survival. 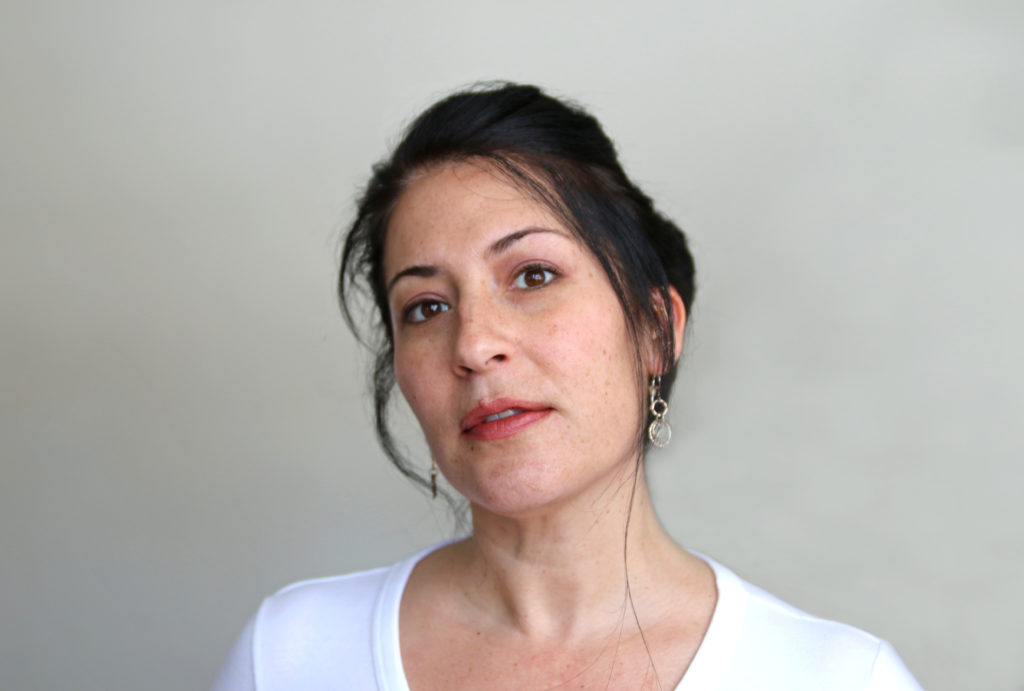 THE CARRYING is such a personal collection—spanning topics like grief and sickness, family and infertility, migration and belonging, all through your own eyes. And yet it fits into this larger, national discourse about gender, about race, even about politics. What were you meditating on when you wrote these poems? How did they come to be, and how did they come to be put together in this collection?

Thank you. It is always the hope that my poems will resonate beyond the personal “I” and connect on a larger more universal level with readers. When I am writing, I’m often filtering the world through my own individual experience, but I’m always letting the world move through me at the same time. How can you not? To be an artist is to be to constantly widening the gaze as far as you can, so that even in my own minutia, the larger big ticket topics are swirling through, the connection to all things.

This collection was written over the last three years. For the most part, I only write one poem at a time, slowly and with attention, until I have about 40 or so. That’s when I realized I was working toward a book. I was thinking a lot about human capacity when I wrote this book. The idea that so many things are happening at once—so much suffering, so much tenderness—and how do we process that, how do we hold on to both of those things without falling apart. I was also thinking a great deal about what it means to be a woman at this point in time, how our bodies are treated, how we are spoken about in the news, how we are spoken about and treated by the President, how are silent domestic work goes unsung, how hard it is to let go of societal pressures in regards to becoming a mother or being childfree. All of that effects us every second.

You’ve spoken previously about defying categorization and how your experiences as a mixed-race person inform, or don’t inform, your work. As conversations about race become more hostile, more based in these tragically persistent stereotypes, more loaded with fear and othering—do you feel more of an obligation now to speak more politically in your work?

I have always been wary about categorization, in poetry or elsewhere, if only because I don’t like limits. I want to think more fluidly about my own skin, my own body, my own consciousness. But that’s also a privilege I don’t always get. Because sometimes I’m not allowed to do that, to be fluid, to be more complex.

I do think because of the hostile nature of the current political climate, it’s impossible not to talk about the dangerous “othering” that’s so prevalent—even among people who think they are doing the right thing; that strange inclusion that feels forced. But I am also keenly aware now of how I am being used. I want to resist tokenization at all times.

It’s hard not to write about that in my own work. It’s something that we deal with every day, with the constant hate speech about Mexicans and illegal immigrants, with the ICE raids. It’s hard not to address it because it lives within you.

I was struck by the theme of survival, and of struggle, throughout the collection. It seems that THE CARRYING, for you, is a heavy load—be it grief, be it physical pain, be it existential pain—but still you draw connections to these legacies of survival women and communities of color share. How do you think we survive this current political moment?

I think we all survive in many different ways. Each day calls for another kind of resistance or surrender. For me, some days I try to focus on the microcosm when the world’s pain is too much to take in. I focus on the little snore my dog makes, the cricket in the screened in porch, the task in front of me. Other days, it requires rage and a fighting back and rallying of support.

The main thing for me is to know that I am not alone. So many women are going through so much all the time. A friend who loses a father suddenly, a friend who is going to leave her partner, a friend who can’t have a child, a friend who has a child and it’s hard, a friend whose husband was deported, another who is struggling with making rent and addiction.

Every woman I know is carrying so much. We have to look out for each other. We have to allow ourselves to be tender toward one another. It’s isolation and the sense that we don’t belong anywhere that can destroy us.

I would be remiss if I didn’t ask about the poem in the collection that actually references a legendary piece from Ms.—yours, “WIFE,” in reference to ours, “I Want A Wife,” the groundbreaking essay which explored the ways in which wives were relegated to living for someone else, for supplementing someone else’s life and not building their own.

You talk about trying to fit into the word, and the ways in which you don’t, not in a traditional sense:

“…Housewife
fishwife, bad wife, good wife, what’s
the word for someone who stares long
into the morning, unable to even fix tea
some days, the kettle steaming over
loud like a train whistle, she who cries
in the mornings, she who tears a hole
in the earth and cannot stop grieving,
the one who wants to love you, but often
isn’t even good at that, the one who
doesn’t want to be diminished
by how much she wants to be yours.”

What does your version of a wife look like? How have you navigated that territory as a feminist?

Yes! Ms. was always in our house growing up, and though that essay was published before I was born, I somehow still remember it.

Before I got married I think I was resistant to the word. It sounded so antiquated. And yet, I did want to get married. That poem was essential to me because it helped me work through my own issues with the word. I am a wife that writes, poets, reads, travels and is not a mother and is selfish with her time—and I’m glad that I get to be that wife. I’m lucky that I get to live in a love that accepts me entirely for the weird complex person that I am. I think I had to reclaim the word, and now I even kind of like it.

I would describe many of the poems in THE CARRYING as feminist poems—works that provide really important commentary on the experiences of being female in our contemporary America. You speak often about the body, about trying to ensure your body belongs to you. You speak often about the ways in which men’s sexism almost permeates every part of your being—your dreams, your ability to pump gas. And you speak defiantly about making room for your story, even if it makes someone uncomfortable. How would you say feminism informs your creative process?

I’ve always said that my two favorite f-words are “feminism” and “forgiveness.”

I was raised a feminist since I was a small child. Feminism informs what I create, because I’ve always been taught that I have value no matter who or what tries to take that way from me. Any woman who has walked down a street has known what it was to feel like your own body—simply by being female—puts you in danger. For women of color, that danger feels amplified.

But it’s not enough to simply admit that we live in a skewed world. We also have to examine it, what makes it so, what are we doing to each other, what harmful myths are we perpetuating, what are we telling ourselves about our own value. Looking further into those issues is important to me—not just for me and for other women, but for men, too, so they can see a sliver of our lives that they might not always get to see.

It’s amazing to me that simply valuing your own voice can be a radical act, but it is.