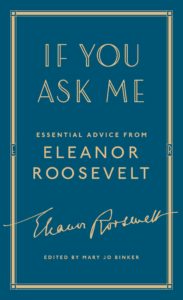 A record number of American women are on the ballot in this week’s midterm elections. There’s no doubt that Eleanor Roosevelt, a pioneer in women’s political engagement, would have been proud. In this essay, adapted from IF YOU ASK ME: Essential Advice from Eleanor Roosevelt, historian Mary Jo Binker looks at Eleanor’s view of American democracy on the eve of a contentious election.

“Advice columnist” is not the first term that comes to mind when you think of Eleanor Roosevelt. Feminist icon, first lady, diplomat, humanitarian, politician, teacher—these are the more common ways she is described and remembered. Yet, for more than 20 years, from the time she was first lady until her death in 1962, she wrote an advice column that dealt with everything from how to achieve world peace to how to attain personal happiness.

If her readers saw her column, “If You Ask Me,” as a source of information, advice and reassurance, Eleanor viewed it as another vehicle to connect with people and promote her vision of a just, open, diverse, inclusive and democratic society.

For Eleanor, democracy was “a way of life” based on “belief in the value of each individual and politics was essentially “the participation of the citizen in his government.” She thought that a citizen’s “chief duty” lay in making “government the best possible medium for the peaceful and prosperous conduct of life,” while voting was the “the very basic minimum of a citizen’s duty.”

Eleanor deplored the fear that gripped her contemporaries, considering it the major obstacle Americans faced in creating a more perfect union and a more peaceful world. She challenged her fellow citizens to move beyond mere tolerance to full acceptance and understanding. “The problem is not to learn tolerance of your neighbors, but to see that all alike have hope and opportunity,” she wrote in a 1945 article titled “Tolerance Is an Ugly Word.” At the same time, she insisted dissenting views must be heard. “The test of democracy and civilization,” she wrote, “is to treat with fairness the individual’s right to self-expression even when you can neither understand nor approve it.”

Despite its many challenges and problems, Eleanor believed in her country and its people. While she did not minimize the difficulties the United States faced, neither did she allow them to overwhelm her. She believed the values she espoused—dialogue, civility, inclusiveness, cooperation and a healthy curiosity—would steer the country through perilous times, not unlike our own.

Now, without further ado, some election day advice from Eleanor Roosevelt herself.

On running for office:

Any citizen of the United States with proper qualifications should be eligible for any public office. The person for whom one casts one’s vote for any office should not be considered because of race or creed, but on his or her qualifications for the job, and his or her value as a leader of the people of the country as a whole. No one should be considered who could not command the support of a majority of the people of the country, because as a leader he could accomplish nothing constructive. [APRIL 1944]

On the danger of taking things for granted:

I certainly do not think our failure to vote is part of our democratic system. I think it stems from the fact so many people believe that all rights and freedoms that go with democracy are going on regardless of what we do. [NOVEMBER 1950]

If any government is “a cesspool of corruption” every individual citizen in the country is responsible when the government is a republic. Governments do not become corrupt unless their citizens have allowed low standards to exist. If you live in a democracy, you set the standards as the individual citizen. You elect your representatives, and the government belongs to you. You and I have to correct anything that is wrong—and we can always be heard. If anything is wrong, the blame is ours. [JULY 1951]

On the threat of dictatorship:

Men who have the instincts for dictatorship are always a danger in any society. Free citizens must be constantly alert to preserve their liberties. In the United States, it is easy to discover a demagogue, but it sometimes requires courage to stand up immediately and say you don’t agree with certain methods and certain ideas. However, if we want to preserve our liberties, we had better show that courage—it is the only way I know of to remain a free people. [NOVEMBER 1960]

On lack of public engagement:

When the American people become apathetic and do not keep the control of their government in their own hands, it is bound to slip into the hands of those who make politics a profession. Therefore, because of their indifference, the American people may sometimes find themselves slaves to representatives who do not really represent them. [JUNE 1946]

On speaking up against injustice:

I rather think the time has come when keeping silent, if other people say things of which you cannot approve, is an escape from doing something disagreeable. Everyone has a right to his own opinion and to state it, therefore I do not think one should be heated or angry over what other people say; but if silence seems to give approval, then remaining silent is cowardly. [SEPTEMBER 1944]

On how to make your voice heard (besides voting):

The most potent way is talking to your neighbors and friends, and creating public opinion. Whether we live in a large or a small city, or in a village, it is what we and our neighbors think which really influences our representatives in the states and in the nation. [FEBRUARY 1947]

On when to stand against your own political party:

I don’t think that one should ever support anything one thinks is a serious mistake for the country, and I have often been critical of specific Democratic stands. If I felt strongly about something, I would certainly express my opinion in public and not keep silent or wait to be questioned. In the matter of voting—which, I suppose, is also a question of party loyalty—I do, however, consider the party as well as the man, because I know how difficult it is for a man to act independently of his party. [NOVEMBER 1961]

On “fake news” and a free press:

I am afraid if we started trying to control the press, we might really do away with an essential freedom. It is true that this freedom is often abused, but I think the basis of democracy is that we educate people sufficiently well so that they can be trusted, in the long run, to judge political propaganda and the type of news that is slanted by certain types of interests. The individual citizen can best control the press by insisting always that the papers in his own home environment write uncolored news stories. [MARCH 1947]

On the double-standards for female candidates:

I have watched a great many women in political life, and I think there may be more reticence in bringing up certain types of accusation against a woman. I have an idea, however, that if accusations have some foundation in fact, they won’t be left out of a political campaign. When anyone, man or woman, goes into politics, I believe one has to develop a pretty tough skin and take for granted one will be treated no more gently than any other candidate. [MARCH 1962]

Mary Jo Binker is a consulting editor for the Eleanor Roosevelt Papers Project at George Washington University and editor of IF YOU ASK ME: Essential Advice from Eleanor Roosevelt. Previously the director of the Oral History Program for the Women in Military Service to America Memorial Foundation, Mary Jo is now an adjunct professor at George Mason University, where she received her master's degree in history and the Evelyn Pugh Memorial Fellowship Award.