These are the subjects of Chicana history who have been willfully been written out of the master narrative—until now. 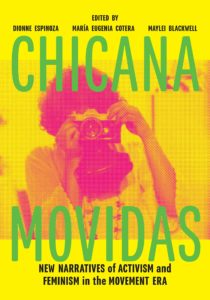 When I originally reviewed Chicana Movidas: New narratives of Activism and Feminism in the Movement Era for the University of Texas Press, I could think of no better group of intellectuals to carry out such a project as Maylei Blackwell, María Eugenia Cotera and Dionne Espinoza. They have established themselves as foremost oral historians and documentarians by editing the collection, which successfully assembles new materials about Chicana activism in the 1960’s and 1970’s largely left out of masculinist Chicano movement histories.

The editors situate the project as part of what Anzaldúa and Deluze have called “the minor and provisional” acts of history where women of color stage their tactics for social change—and take the critique one step further by naming such acts as movidas. The movida, as theoretical concept, provides much flexibility to the editors, because it is an analytic tool for tracking parallel counterpublics and small acts of dissent that fall outside of traditional movement frames. The informalities of movidas in “[h]allways, passages, kitchens—places in between our outside of the main events—these are the spaces of transit and possibility where Chicanas mobilized strategies to challenge the internalities of power and form new networks of resistance” provide an outstanding theoretical framework for the collection.

There is a lot of revelation and light in Movidas, despite the heavy and sometimes disturbing nature of the degree to which Chicana activists during the movement era were bound by and posed staunch challenges to the quadruple oppressions faced in everyday struggle—race, class, sexuality and gender. It is a must-read. The meticulously crafted narratives mobilize archives, both personal and public, to get at the deafening silence about the multi-regional, multi-generational and often interlocking activist circles of Chicana women and their counterparts in the U.S. and abroad.

There are several essays and oral histories which hold the collection together. In each, we see the role of sexual practice, reproductive rights, and bodily freedoms that represented hard-fought battles for Chicana liberation. The attentiveness to the HIV/AIDS crisis, along with that of queer sexualities and Chicana sexual freedoms more broadly, provide a radically different historical account than what’s been published to date.

Inside, we hear from long-time activists like Anna NietoGomez and Martha Cotera, who provide a goldmine of information about not just the life of Francisca Flores, but of numerous other female counterparts in organizing over the years. My hope is that after reading these essays, students will go out and try to complete the histories of the other actors mentioned in their essays.

An oral history with Hidalgo de la Riva is outstanding, both for its candor and content, especially with regard to multi-generational lesbian sexual, familial and artistic politics. I was intrigued and grateful to hear about how Chicana lesbians in the 1950’s formed community, and how that led to Hidalgo de la Riva’s own understanding of activism and her love of women so early in life. An Anzaldúa oral history gets at many of the unanswered questions about how she was critiqued by other Chicanas and why she arrived at the category of Third World Women in her own writing.

Movidas is a treasure trove of new materials from the Civil Rights Era. Blackwell, Cotera and Espinoza have managed to assemble a collection that is readable and theoretically sophisticated; the new interpretations of Chicana activism it offers in its pages will be of much help to undergraduates, graduate students and faculty wanting to expand their knowledge of the Chicano/a movement beyond the current masculinist archive of history. It does a tremendous service to students of Feminist Theory, Chicana Studies and the Civil Rights movement.

This collection, like the Chicanas who challenged sexism during the Civil Rights Era, is anything but passive. There’s nothing out there like it.