The Ms. Q&A: How Kimberly Dark is Untangling Herself from Patriarchy - Ms. Magazine
Skip to content

Author, performer and activist Kimberly Dark describes her latest book, The Daddies, as “a dark love letter to masculinity told as a lesbian leather-Daddy love story.” Within its pages, she seeks to unravel the ways patriarchy is embedded into our relationships—and the rest of our lives. Such is her practice, in which she exposes the tiny fibers that shape our lives page by page and line by line.

Dark, a professor in Sociology and Women’s Studies at CSU, San Marcos who also teaches writing and theatre courses for Cal State Summer Arts, is an award-winning playwright and a prolific essayist; she also travels to campuses, conferences and other convenings to hold storytelling performances and interactive lectures.

In this special installment of the Ms. Q&A, award-winning and bestselling author Lidia Yuknavitch talks to Dark about her new book, what it means to have a body and the activism of genre-bending. 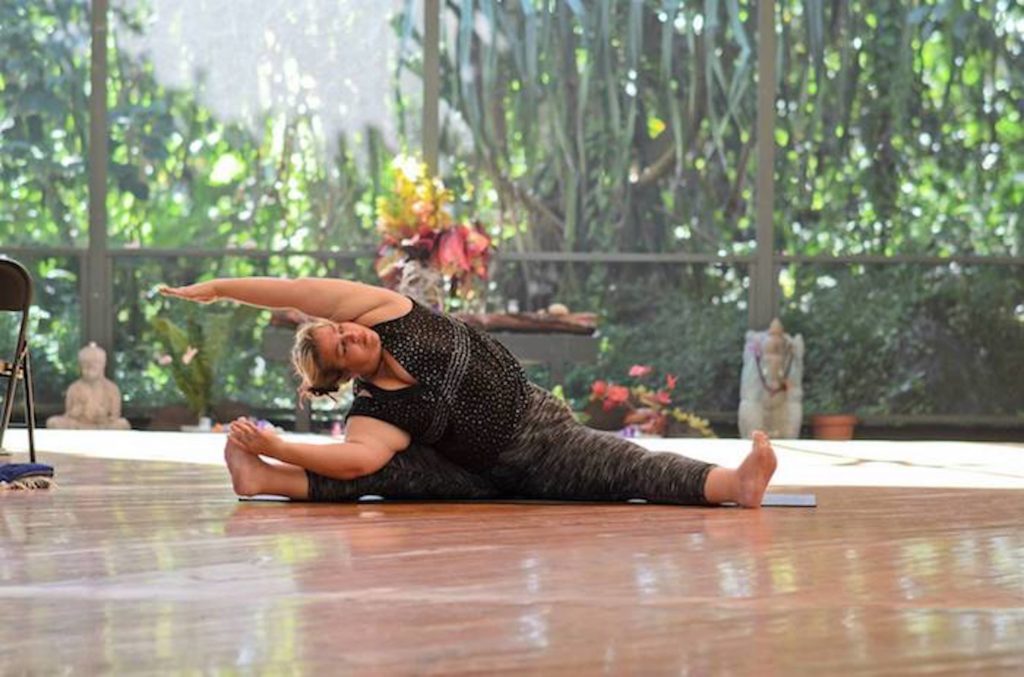 You write so gloriously about the hundreds of ways it is possible to inhabit a body in the world. Can you talk a little about the “space” of the body, how we occupy that space, how the social spaces around our bodies do and do not define us, how that space is written over, how a body resists or even breaks down those cultural inscriptions?

It’s amazing how individual bodies, when seen or felt—through literature, or song, or—can disrupt and re-arrange social narratives. It reminds us that culture is really nothing but a shared story about what things mean. Every part of human culture was made by humans, after all.

I feel this as a performer in a more immediate way than as a writer, since the audience is right there. The most important thing I do as a performer is to invite the audience to look at my ordinary body while I tell stories about life. By ordinary, I mean that I’m not on a unicycle, I’m not swallowing fire, I’m not even moving around much. My performance-colleague Deb Margolin has said that one of the most significant things a woman can do on stage is stand still. We’re always moving, posing, doing, acting. I think about this whenever people use that term “resting bitch face.” Like, whoa, people expect something legible to always be happening on a woman’s face. If it’s not immediately legible, it must be “bitch face.”

Amazingly, the body revealed can break down cultural inscriptions because multiple narratives are available all at once. When I’m telling a story on stage about sex or romance or grief, I’m inviting you to look at the body that has experienced those things.

I’m also incidentally a parent, and fat, and queer, even though I seem gender-conforming. We have been socialized to believe that identities such as “parent” render us wholesome, and that marginalized identities can only be visible when they are the subjects of the story—but no, I’m not talking to you about specifically fat, queer sex; or romance; or grief. Suddenly, multiple narratives fill the stage via the cultural expectations of the viewers.

When I get the writing and storytelling right, I’m actually orchestrating some of those hidden narratives as well. Some of them are a surprise, even to me. I’ll never forget a post-show discussion back in 2005, when I was performing a show I wrote called “Stripped and Teased: Scandalous Stories with Subversive Subplots.” I spoke from a variety of perspectives, as usual; the audience saw me embody my 18-year-old self applying for a stripper job, then a waitress job, and they also heard my current self reflecting, being a scholar and teacher. A man in the audience couldn’t believe that the show was really about my life. When I pressed him in the post-show discussion, he blurted: “people who have those experiences when they’re young just don’t end up respectable like that later!”

Aha. Dude said a mouthful! Then suddenly we could have a conversation about why this is so, whether it should be so and what can be done about it. That discussion progresses from a much more active place than the one where we’re pondering theoreticals.

You write ecstatically, at least to me, across forms, and you also perform stories physically—you are a genre-bender as well as a gender-bender. Is this an activist move? What do you see between forms?

I try to remind others: You are entitled to learn and know and do anything you want. You are not limited by school subjects, money and expectations. And for pity sake, don’t be faithful to what rewards you! Do as many things as genuinely interest you.

I also try to live that way myself.

Yes, taking responsibility for one’s time and interests and resources is absolutely an activist move. As much as I love scholarship, for instance, I stopped pursuing degrees after my Masters because I didn’t think what we were doing in the academy at the PhD level was the best way to learn things. I felt that we were re-inscribing hierarchies and systems of oppression that I was actively trying to dismantle out in the rest of the world. I didn’t want to give my energy to that machine.

There are drawbacks to not being part of a specific club. I’m a perennial outsider—rather than paying the dues to be a writer or a theatre artist, I have just done the things I thought were important and looked for how to get paid. (Though for sure, not everything that interests you and is worth your time should earn you money.) I’ve done pretty well making a modest living at writing, teaching and theatre without falling into drudgery and doing things I don’t want to do. And wow, it’s taken me a really long time to get some books out.

The Daddies especially, is a gender- and genre-bending book. Since “daddy” is a cultural archetype, of course it can be embodied in people of all genders. The narrative includes linear storytelling and magical realism along with media analysis, cultural critique—there’s even a recipe and a description of a last-century curio cabinet peach pit carving.

We’ve woven patriarchy through every aspect of our existence. There’s not just one weed to pull up by the root. We have to acknowledge what gets us hot, what we love and why and then really make a fertile soil for new possibilities. The old stuff is the mulch—which is to say, whatever new world we make will be grown from the old. Acknowledging and mucking about in our darker desires with our full responsibility intact—that’s really going to help. What are we getting wrong about gender, sex and sexuality? What are better questions to ask, better explorations to consider?

What other questions might we ask? What if we weren’t so fixated on gender? What other ways might attraction be organized? For instance, what about basic body type? Tall and skinny. Thick and muscled. Soft and short. If you find you’re often attracted to folks, regardless of gender, who are like a soft little bonbon or like a hard wire, maybe that’s your sexual orientation! What about blood type? What about metabolism? What about ayurvedic dosha?

The point is: When we get stuck on any one thing, we fail to even look at other patterns, other information, other forms of desire. It’s astonishing to me that most people’s attractions remain so narrow. Like, it’s a big deal to date a redhead if you’re normally attracted to blondes! Somehow it goes without saying that we want the rest of the body to look as close to “perfect” as possible.  But wow—have you seen human bodies? There are so many interesting things about body diversity, most of which people just ignore if it doesn’t match what we see in the media. Seriously, people claim to be attracted only to those who look like celebrities, so much so that we’ll even refer to someone as being “the poor man’s Cardi B” or “George Clooney if he sold insurance.”

It’s as if we accept the programming we’ve been sold so enthusiastically it’s hard to even feel what’s happening in the body. People still think they could never date someone short or fat or without legs, as though attraction is literally, rather than socially, bounded by those things.

What compelled you to write The Daddies?

I don’t think I’m the only one to have this experience: you get involved with someone who is kinda messed up, but really compelling. Maybe it’s hot sex, maybe it’s the same cologne your father wore, but the way your mother dropped her eyes when she didn’t understand something she thought she should know. Whatever. The point is, you knew that person was a train wreck and would mangle your life as well, and you stayed until you were bloody, or your personal esteem was in the toilet, or your money was gone.

You lived through it. And then thought: What the hell did I do that for? Maybe most importantly: What made you think that person could change enough to really become a person you’d want to be with forever?

The main storyline in The Daddies is about those choices, but it’s a hybrid narrative that also navigates the cultural connections that make our stupid love-choices seem so normal. Specifically, patriarchy—and how it’s woven through everything we ever do, how we feed and house it in our lives and bodies, even when we don’t want to. I wrote The Daddies because I don’t want to be complicit in patriarchy any longer. I suspect that fixing that stuff in our lives will lead to more solid and positive social changes, too.

I actually wrote this book nearly 10 years ago, but it seemed far-fetched to some who read it. How could I be claiming that we take our love-hate for our fathers, our presidents, our gods and our professors into our sexual relationships? How could I be claiming that we choose the terrors of patriarchy in our personal lives? But wow, suddenly our nation has elected a sex offender president exactly because his blow-hard know-nothingism makes some people feel safe. We literally heard him boasting about repeatedly assaulting women, and that was fine with many voters.

In the last decade, books and films in the 50 Shades of Gray genre are ubiquitous and legit; simultaneously, more women are shouting back that they’ve endured abuses in the workplace forever and it needs to stop. I think suddenly the radical connections between cultural and personal contradictions that I put forth in The Daddies are not so radical after all.

Lidia Yuknavitch is the founder of the Corporeal Writing workshop series and author of national bestselling and award-winning novels The Book of Joan and The Small Backs of Children and the memoir The Chronology of Water. A book based on her recent TED Talk, The Misfit's Manifesto, was released in October 2017. Her writing has also appeared in various anthologies and in publications like Guernica, The Iowa Review, Zyzzyva, Another Chicago Magazine, The Sun, Exquisite Corpse and TANK.